Parents know that keeping the whole crew content during a vacation is no small feat, and it takes more than just a shallow kiddie pool for a hotel to qualify as child-friendly. In recent years, certain travel organizations (from boutique hotels to cruise lines, major international and domestic airports, and tour operators) have taken an interest in appealing to families on the go. They've ramped up their childcare programs, designed exclusive activities for teens, given mom and dad much-needed retreats from parenting, and found inventive ways to bring the family back together. And that dingy kiddie pool? It's been replaced with a four-story, translucent water coaster that floats across the world's oceans.

If you think it will be hard to get the kids on board with a luxury river cruise, you haven't tried Uniworld. The line offers itineraries on more than a dozen rivers in 20-plus countries, including Germany, Egypt, China, and Vietnam. Their multigenerational cruises—which always take place during summer and winter school vacations—include free bicycles for use on land, kid-friendly menus, onboard language lessons, hands-on crafts workshops, and a dedicated Family Host to oversee kids’ activities.

Since leading its first tour in 1966, Butterfield has built a reputation for its active-luxury travel, and that means by bike, foot, or boat. The company creates private family adventure itineraries—everything from biking in the Loire Valley of France to exploring the Berber villages and Marrakech in Morocco—aimed at educating kids of all ages (though they’ll be having too much fun to realize they’re actually learning!).

It’s no surprise this family-run business—founded by native Kenyans Felix and Jane Pinto—is a favorite of, well, families. From countless trips with their children and grandchildren, they know just the right types of activities and camps to book, and can personalize itineraries based on age and interest. And for every safari sold, the company pays for a child’s education in Africa through its nonprofit AmericaShare.

Located on a serene crescent of sand along Oahu’s western shore, this is the first Disney-built hotel that is not connected to an amusement park. Aulani makes traveling with children seem surprisingly easy, from the bassinets and baby-proofed balconies (standard with most rooms) to the complimentary kids’ club. Still, it’s the outdoor adventures that set Aulani apart: swimming with (tame) stingrays, learning to snorkel amid hundreds of angelfish, or paddleboarding in the shallow waters off the beach.

At the base of Blackcomb Mountain, and a short walk or shuttle to the Whistler-Blackcomb lifts is the Four Seasons' first Canadian ski resort. In addition to being conveniently positioned for when mom and dad are tasked with carrying the kids’ skis, the family can warm up après ski-style in one of the outdoor hot tubs with hot chocolate or while toasting golden brown s’mores around the fire pit.

Gleeful parents who can’t quite believe that they’re on vacation with their kids and things are going so well can be found in abundance at this all-inclusive resort. Italian, French, Caribbean, and Floridian-style villages share a central, 45,000-square-foot water park and a 21-and-under teen disco. There’s a DJ academy, a surfing simulator, and 12 miles of white-sand beach. Elmo and the Cookie Monster have even been known to make an appearance.

Families from around the globe call this hilltop resort their annual basecamp for school breaks. Just north of the Nicoya Peninsula, above the placid Gulf of Papagayo, families can be seen horseback riding or lazing beside the on-site golden-sand beaches or four pools. Those ages four to 12 can take advantage of the complimentary children’s program, which offers daily activities and a private pool, while teens will love the dedicated Tuanis center with a basketball court, PlayStation 3, Nintendo Wii, and more diversions. Weekly outings could include zip-lining through the rainforest or white-water rafting.

This stunning resort on the Victoria & Alfred Waterfront has 131 spacious, high-tech rooms and a 40-foot-tall picture window framing Table Mountain at Vista Bar & Lounge. Young ones (ages four to 11) can take advantage of the KidsOnly club—which offers activities like jewelry-making, ostrich egg-painting, sing-a-longs and African dance instruction—while parents enjoy the spa and Africa’s only Nobu outpost. Indoor karting, rock climbing, bowling, and sandboarding on dunes can be arranged for teenagers.

After a $20 million renovation, the glass-and-concrete skyscraper is better than ever. Gold stars abound for its ideal location, overlooking the Harbour and the Sydney Opera House, and mere steps from the historic Rocks District. It’s a great home base for families wanting to explore all that Sydney has to offer. The property has a salt-water pool, a spa, and three restaurants, including the historic Customs House Bar for flatbread pizzas, potato wedges, hot dogs, and other crowd-pleasers.

Royal Caribbean may be known for having the world’s largest cruise ship, but they can also brag about their award-winning kids’ program and attractions that include ice-skating rinks, zip-lines, bumper cars, roller-skating, and merry-go-rounds. Thanks to a deal with DreamWorks, you may cross paths with characters from Shrek, Madagascar, and Kung Fu Panda on the Lido Deck. Complimentary Barbie activities, including movies and storytelling, will tickle some little girls pink. When the Harmony of the Seas surpasses its sister ships in the Oasis-class, it will do so with three waterslides spanning three levels of the ship. Royal Caribbean’s ships are the perfect place for a little friendly family competition.

Is it any surprise that the brand that conjures magic in movies and theme parks also runs a cruise line perfect for entertaining the whole family? What may surprise you is that the large ships are gorgeous even without Disney touches. Kids can play on the Imagineers-designed AquaDuck water coaster (a 765-foot long ride that extends out over the edge of the ship) while adults lounge in their own entertainment “district,” complete with late-night clubs and private sundecks. Not that there’s any shame in mingling after a show with Mickey or humming along to the When You Wish Upon a Star horn when leaving port.

Yacht-style cruising has long been reserved for the older, moneyed types. But Seabourn is transforming those preconceived notions by catering to the multi-gen travelers. A number of cabins and suites have interconnecting doors, and during the summer months, Seabourn offers youth programs for children ages 5-12 and teens 13-17. Scavenger hunts, dance parties, arts and crafts are all on the table. Of course, there’s the very real likelihood that your kids won’t want to leave your side—not while you’re exploring ancient cities and partaking in adventurous shore excursions like snorkeling and hiking.

Plantation-style cottages and a Jack Nicklaus golf course attract grown-ups to this low-country retreat: but it’s also a popular spot for family reunions. Guests of all ages are encouraged to indulge in a little southern comfort in one of the treehouses (a childhood dream come true), complete with hammocks and an observation deck. Kids are encouraged to sign up for the PB Explorers and Pioneers camp (ages 5-12) for wholesome fun like Frisbee, fishing, and an ice cream social.

Your kids will be so pampered at the Four Seasons Punta Mita, you may find yourself trying to sneak into the 12-and-under crowd. A welcome amenity (including colorful alphabet bath sponges and milk and cookies on the first evening) will get your family holiday off to a sweet start. The Nunutzi Games Room, ideal for teens, and a children’s center have both been recently renovated, and contain complimentary snacks (like the popular hibiscus drink) game consoles, air hockey, and a small theater.

Kids will have no trouble sleeping through the flight after spending a layover at Portland International Airport. There’s a padded, colorful jungle gym just before security (equipped with a telescope for viewing takeoffs and landings) and LEGO tables in Concourse C. Head to the ABC lobby for live music and pop-up food, like Sandoval’s tacos on Tuesdays and produce from local purveyors. When tummies start grumbling, head over to Terminal D for a fleet of food trucks (Pok Pok Wing by Andy Ricker) and Country Cat for Chef Adam Sappington’s skillet-fried chicken, perfected over four generations.

There’s something for everyone at Hong Kong International Airport, especially when it comes to food. Try steamy Tsui Wah fish balls in scallion broth, or (for the adults in the group) sliced goose in a signature marinade at Hung’s Delicacies. At the Aviation Discovery Centre—a miniature amusement park for flight fans of all sizes—there’s a plane-cabin ride simulator, a historical aircraft exhibition, and rooftop deck for panoramic views of Chek Lap Kok island. Other diversions include the enormous IMAX movie theater, a regulation golf course, and an iSports simulator. Believe us. The kids will think the vacation has already begun.

Best Hotel in Europe: The Goring

What better place to bring the family than this 69-room family-run hotel? Parents love it for its beautiful blend of modern glitz and classic English charm and its ideal location just steps from Buckingham Palace. When the Goring reopened this spring, it showed off more than just a structural facelift. Another major change: those staying in suites now have a dedicated footman for the duration of their stay (and, sometimes, beyond). The fleet of five butlers, donning crimson regalia, has been known to pull off such wonders as a one-year-old’s birthday party (no minor task). The footmen blew up balloons and decked out a top suite with decorations and toys. The best part? The celebration continued outdoors in the hotel’s garden with a Shetland pony, of course.

No family expedition to India is complete without a trip to the Taj Mahal, and this prime property is less than 700 yards away from the epic landmark. All of the 102 rooms have uninterrupted views of the monument, as well as French doors, 24-hour butler service, blackout curtains, and a pillow menu. Book the Luxury Suite for interconnecting rooms. If you can pry the kids away from the fully equipped pantry or twin, widescreen televisions, board a private golf buggy to visit the icon you came to The Oberoi Amarvilas to see. 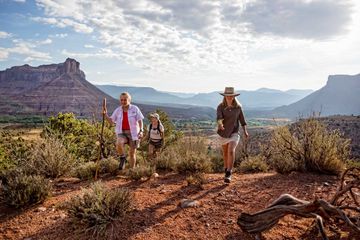 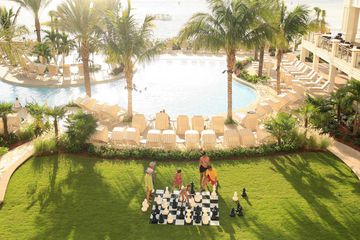 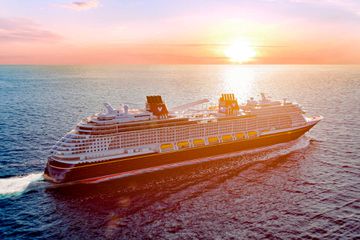 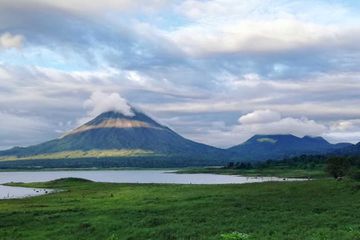 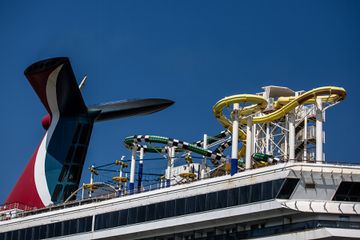 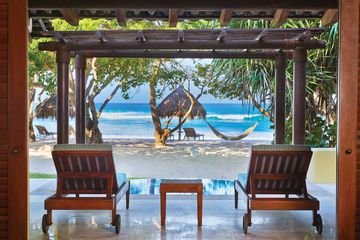 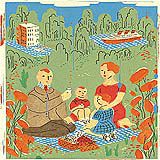