The glittering cities of North Africa and the Middle East offer more to see and do with each passing year. Qatar’s capital city, Doha, just unveiled a Jean Nouvel–designed National Museum, made to resemble the “desert rose” crystals that are commonly found in the country. It joins the region’s satellite branch of Paris’s Louvre Museum, which opened in Abu Dhabi in 2017. Cairo is making a big statement with next year’s unveiling of the Grand Egyptian Museum (at a reported cost of $1 billion). Cultural institutions aren’t the only things drawing readers here, though — the region is also home to some of the best urban hotels in the world.

A few minutes’ drive from downtown Cairo, Four Seasons Hotel Cairo at Nile Plaza (No. 5 on this year’s list) has emerged as one of the leading high-end hotel options in the Egyptian capital. The location is convenient, but the comforts within this modern, 30-story building are what set it apart. There’s one of the largest spas in the city, a series of rooftop swimming pools, a health club with floor-to-ceiling views of the Nile, and nine food and drink establishments, including Zitouni, which serves authentic Egyptian cuisine (and a sumptuous breakfast buffet).

It’s not often you’re able to stay in a hotel commissioned by a king, and checking in to Royal Mansour certainly makes one feel like nobility. The hotel is the personal passion project of King Mohammed VI of Morocco, who oversaw every detail. “This was one of the most amazing places I’ve ever been,” wrote one reader. Guests will find an over-the-top experience, starting with one of 53 private, multistory riads where staff enter and exit discreetly via underground passageways — there are no “normal” guest rooms here. And as you’d imagine, the spa and dining options are largely considered the best in the city. Rounding out the experience are acres of manicured gardens with palms, citrus trees, and fragrant desert flowers, and a huge new swimming pool that debuted just a few years ago. 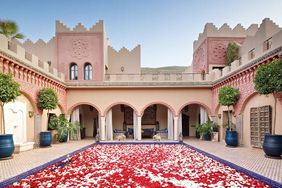 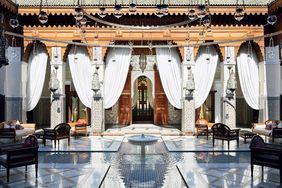 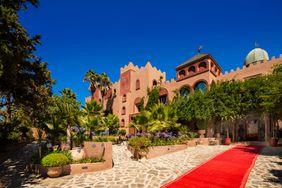