For a city that's basically square, San Francisco is infused with California cool in every bit of its hilly 46 square miles. Whether it's diving into its funky art scene, enjoying culinary delights in the nation's oldest Chinatown, or taking in the majestic waterfront views stretching from the bay to the Pacific Ocean — including from the new 14-acre Presidio Tunnel Tops park, opening this summer — the peninsula destination calls to every kind of traveler.

Despite San Francisco's wide-ranging areas, from the Mission and Golden Gate Park to the Castro and North Beach, T+L readers honed in on three top choices within a three-block radius in Nob Hill. The elevated neighborhood, which a reader called one of the city's "cleanest and safest," has a built-in boost for sprawling Bay Area views, but is also convenient for its proximity to Fisherman's Wharf on the north and Chinatown and the Financial District on the east. The area hotels are also among the city's most iconic, especially the Fairmont San Francisco Hotel (No. 2), known for its tropical-themed Tonga Room &Hurricane Bar, and InterContinental Mark Hopkins San Francisco (No. 3), with its Top of the Mark 19th-floor sky lounge.

The top choices were rounded out with another pair of hotels not far away: the St. Regis San Francisco (No. 4), in SoMa and a quick walk to Union Square's shopping hub, and the Fairmont Heritage Place, Ghirardelli Square (No. 5), located between Fort Mason and the Irish coffee institution the Buena Vista.

Sitting atop Nob Hill in a 1909 Neoclassical historic building with Ionic columns, the 336-room hotel radiates with grandeur from afar. Inside, the vibe changes to an urban resort, where the staff offers personable service called "impeccable" and "well-run" by T+L readers. For a city center hotel, the 400- to 475-square-foot rooms and 600- to 1,980-square-foot suites are spacious, decked out in soothing tones of blues and grays. Also on site: wine tastings at JCB Tasting Lounge, California specialties served up at the Lounge, and an inner courtyard for a breath of fresh air right in the heart of the city. But ultimately, it's all about the Ritz-Carlton's prime location — with a cable car right at its doorstep. 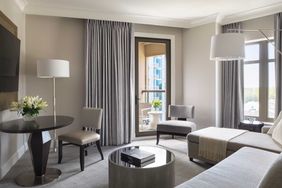 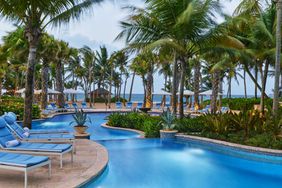