San Diego's biggest draw isn't a flashy tourist attraction—it's a state of mind. After all, when the average year-round high temperature is a comfortable 72 degrees, worries melt away and a sunny attitude radiates. That relaxed vibe is felt everywhere, from the 70 miles of Pacific coastline and 1,200-acre Balboa Park (with 17 museums plus the San Diego Zoo) to the 19th-century adobe-filled Old Town and the indie haven of South Park.

Every year for our World's Best Awards survey, T+L asks readers to weigh in on travel experiences around the globe—to share their opinions on the top hotels, resorts, cities, islands, cruise ships, spas, airlines, and more. Hotels (including safari lodges) were rated on their facilities, location, service, food, and overall value. Properties were classified as city hotel, resort, or safari lodge based on their locations and amenities.

This year, one area dominated readers' San Diego picks: Downtown and the Gaslamp Quarter. It's no surprise, since mixing coastal chill with urban allure is what the city is known for, and this spot is a convenient home base for exploring all of its greatest hits.

The Guild Hotel (No. 2) was praised for its "amazing location" and "beautiful architecture" inside a former Armed Services Building dating back to 1924. Andaz San Diego (No. 5) received accolades for its "wonderful vibe" that one reader called "sophisticated, but family-friendly," as well as its details, including great bathtubs.

Just about a mile to the west on the waterfront is InterContinental San Diego (No. 4), which impresses with floor-to-ceiling views of the San Diego Bay from its 400 rooms, yet is still with easy reach of urban attractions such as the newly opened BRIC, with 60,000 square feet of dining and shopping options.

Pendry San Diego isn't just a place to stay in the thriving cultural heart of San Diego—it's an important part of the infectious energy, home to a bistro and home goods market, rooftop lounge, beer hall, cocktail bar, and throwback-era social club. But it's the 317-room boutique hotel's friendly service that pulls at T+L readers' heartstrings, with a "happy" staff that are "top-notch" and "treat the guests really well." One called the property the "best in San Diego." The rooms draw inspiration from southern California's kick-back coastal style, but also raise the bar with custom amenities (think: marble countertops, Nixon speakers, and curated photography), and guests also get access to the Pendry's sun-soaked rooftop pool. 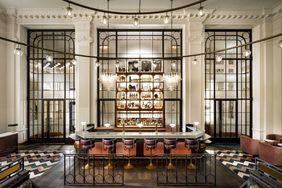