Travel + Leisure is exploring America one three-day weekend at a time. Here’s how to pack in the best of New York’s food and cultural attractions into a short trip.

New York literally is the city that never sleeps. The subway runs 24 hours a day, the lights are always on in Times Square, and there are plenty of things to do over a long holiday weekend. Just don’t try to do everything in one trip.

From some of the best museums in the world to one of the most iconic parks on the planet, here’s how to have the perfect three-day weekend in New York.

There’s no better way to start a New York vacation than with an authentic New York bagel from H&H Bagels on the city’s Upper West Side. Make sure you get it to go.

Take your bagel into Central Park, the 840-acre oasis that separates the Upper West and Upper East sides of Manhattan. This urban green space is one of the best places for picnicking — and people watching — in the city.

While you’re in Central Park, visit Strawberry Fields, a memorial to John Lennon, who spent the last decade of his life in New York. Movie buff? Make your way to Tavern on the Green, which made an appearance in "Ghostbusters", and Sheep Meadow, a 15-acre swath of grass you might remember from "Wall Street," "It Could Happen to You," and "The Manchurian Candidate."

On the east side of the park, you’ll find its famous Alice in Wonderland statue.

When you’re done, make your way to the closest train to head to Chinatown. Have a lunch of delicious dumpings at Joe’s Shanghai, then get lost in the streets of both Chinatown and Little Italy. Do make a stop at Little Italy’s Ferrara Bakery for dessert.

For dinner, head to Peter Luger’s, a Brooklyn steakhouse that’s one of the city’s best. Don’t forget to stop at an ATM first. The restaurant only accepts cash.

If you haven’t already scored tickets to a Broadway show, do it this morning. Grab an on-the-go breakfast and head to the TKTS booth on 47th Street in Times Square for same-day, discounted tickets. Don’t be surprised to find a favorite celebrity among the cast members of whichever show you select and don’t let a line deter you. Lines here move as fast as the city does.

While you’re in midtown, explore Times Square — the world’s largest pedestrian district — and head toward the Empire State Building. Head to the top for iconic postcard views of midtown Manhattan and beyond. Do a little shopping at one of the world’s largest department stores, the nine-story Macy’s location in Herald Square.

Once you’ve worked up an appetite, head to Katz’s Delicatessen on the Lower East Side for a pastrami on rye for lunch. Take a walk around the neighborhood before heading to the 9/11 memorial and museum.

The memorial sits where the iconic Twin Towers once stood and is a somber tribute to the tragedy that struck the city in 2001. The memorial is near the highly Instagrammable Oculus, which serves as a shopping and transportation hub that will get you back up town to catch whichever show you’ve selected.

Before the show, stop at Tony di Napoli’s for a family style Italian feast. Be sure to make a reservation as tables fill up fast across this area ahead of showtimes.

Spend your last day in New York sampling the city’s world class museums. But first go to Tanner Smith’s in midtown for brunch. This restaurant’s spiked tea brunch cocktails aren’t to be missed. Tea is served in an elegant pot made for two, and the food is simple but hearty and delicious.

After brunch, head to the nearby Museum of Modern Art. Wander through its galleries and don’t miss the garden. Catch a train from there to the Metropolitan Museum of Art on the city’s Upper East Side where you’ll want to carve out time to see the Temple of Dendur and checkout the views from the museum’s roof.

Grab a slice to snack or street vendor hot dog to snack on along the way.

From there, walk north to the Guggenheim and do take a moment to gawk at this magnificent piece of architecture before you walk into the museum.

For dinner, head to Stone Street in the financial district. This street includes a collection of restaurants ranging from steakhouses to pizzerias, even a Mexican restaurant. Whatever you’re craving for your last dinner in New York, you’re likely to find it here. 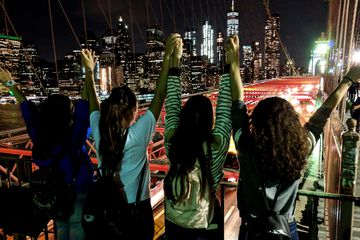