How to Have the Perfect Long Weekend in Chicago

If you’re looking for a quick escape, there's nowhere better than Chicago to spend a few days. It’s easy to get to from Chicago from almost anywhere in the U.S., and there’s plenty more to do and eat than you'll have in terms of time — and appetite.

Here’s how to have the perfect three-day weekend in Chicago.

Kick off your long weekend in Chicago with a trip to Cloud Gate in Millennium Park. The sculpture, known colloquially as “The Bean,” is made of 168 pieces of stainless steel pieced together without any visible seams. The Bean is one of the most Instagrammable spots in the city, and has a 12-foot arch with an underside that warps and multiplies reflections.

Once you’ve got your perfect selfie, walk over to the Art Institute of Chicago to explore almost one million square feet of art, including Picasso's The Old Guitarist, Edward Hopper's Nighthawks, and Grant Wood's American Gothic. When you’re done, wander through Grant Park and checkout Buckingham Fountain, as well as the numerous pieces of public art on display.

Head across the river for an Italian Beef sandwich from Portillo’s for lunch, then hit the deck — the Willis Tower skydeck that is. Willis Tower, formerly known as Sears Tower, is a 110-story skyscraper that held the title of tallest building in the world for almost 25 years.

For dinner, grab a table at Quartino for a lively, family-style Italian meal. Don’t miss the eggplant parmesan, and do make a reservation ahead of time.

Start your Saturday in Hyde Park with brunch at The Promontory, where you can try a twist on the traditional mimosa, the beermosa. Then head to the University of Chicago campus to visit Robie House, designed by the famous architect Frank Lloyd Wright, who called the Chicago area home for the first 20 years of his career.

Afterwards, ride the iconic “El” train north to pay a Sue the T-Rex a visit at The Field Museum. The Field Museum is one of the largest natural history museums in the world and is a dinosaur geek's paradise. While you’re there, walk over to Soldier Field, the picturesque home of the Chicago Bears. Tours start at $15. A VIP tour for $25 allows visitors to spend 15 minutes on the field.

Next, head to Giordano’s, Gino’s East, or Lou Malnati’s for deep dish for dinner, then make your way uptown for a jazz show at The Green Mill Cocktail Lounge. Al Capone was once a regular at the lounge, and his favorite booth is still standing. If the Green Mill looks familiar, it’s because you may have seen it in "High Fidelity," "Prelude to a Kiss," and "Soul Food."

Make a quick stop at the Doughnut Vault in River North for a sweet start to your Sunday. Doors open at 9:30 a.m., but you’ll want to get there early because the doughnuts never last long.

Afterward, head to the corner of Michigan Avenue and Wacker Drive for the Chicago Architecture Foundation’s river cruise. This one and a half-hour boat tour is well worth the $45 price tag, and is arguably the best way to see Chicago. It’s also a great way to learn about how Chicago became the architectural gem it is today. The cruise passes by icons including the Merchandise Mart, a building so big it has its own zip code, and Marina City, a pair of residential towers known as the corncobs.

Take a stroll by the Chicago theater, then stop for lunch at Rick Bayless’ flagship Mexican restaurant, Frontera Grill. The restaurant won a James Beard Award in 2007 and has been a local favorite for decades.

Catch an afternoon comedy show at The Second City, which has hosted celebs including John Candy, Joan Rivers, Stephen Colbert, and Bill Murray. Then head to Hopleaf for dinner in Andersonville, a Swedish enclave on the northern edge of the city that’s a rare oasis from national chains. Hopleaf is known for its Mussels & Frites, expansive craft beer selection and CB&J — a cashew butter, raclette cheese and fig jam sandwich. 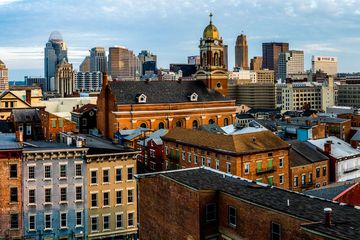