I walked down the hill, the suburban quiet all around me, trees offering some shade from the sun above. As I reached South Broadway, one of the main streets in Nyack, NY, and turned the corner, I noticed something: there was hardly a chain store in sight.

Nyack is a small village of about 7,000 residents that sits on the other side of the Hudson River in Rockland County under the shadow of the Governor Mario M. Cuomo Bridge, formerly the Tappan Zee Bridge. It’s small, especially compared to the hustle and bustle of New York City, just over 30 miles away. And the largest — and only — chain retail appears to be Starbucks (which at this point is just ubiquitous, so we’ll let it slide).

The town’s history stretches back to the late 17th century and Victorian homes make for a common sight along the picturesque blocks of the village, leading down to the banks of the river.

I strolled up and down North and South Broadway, admiring the architecture — even the stone building that housed the public library had ivy growing up its walls. The charm of the village with its quaint shops and welcoming people was enough to make me feel as if I was a world away from my apartment in Brooklyn, rather than just a 45 minute ride away on Metro-North.

In fact, Nyack was as easy to get to as it was a total escape, making it the perfect place for a quick weekend getaway from New York City.

I walked into pied à terre on South Broadway and quickly wished my bedroom looked the same, classic dresses in blues and whites and a modern-yet-vintage vibe to the home furnishings on display. Just down the block, the Maria Luisa Boutique was filled with adorable tea towels and fluffy cloud mobiles for kids, while its sister store, ML by Maria Luisa, featured fair-trade products from small businesses sourced from all over the world.

As I stepped inside Pickwick Book Shop, open since 1945, I felt a bit like Alice after she fell down the rabbit hole (in a good way) — towering bookshelves packed with tomes reached nearly to the ceiling with books piled on top of each other in a never-ending reading wonderland.

On the other side of Broadway, t-shirts with cities “London, Paris, Tokyo, and Nyack” sat on a shelf in a delightful shop The Editor, which also included racks of dresses sorted by size for easy browsing and a selection of artisan cards.

The Time Nyack offers 133 guest rooms and suites in a repurposed factory, maintaining some industrial touches like exposed ceilings in the rooms and floor-to-ceiling windows in the lobby. The outdoor pool features plush couches and red cushioned daybeds, making it a great place to relax and sip a cocktail after a long day of exploring the village. (They even offer bike rental packages if you want to skip the lounging in favor of a little — or a lot of — exercise).

For those more inclined to seek out a homier getaway, Airbnb has plenty of options including in a Victorian homes and inviting garden cottages all within walking distance to downtown.

Feast on Israeli-inspired dishes like shakshuka and vegan-stuffed grape leaves or spinach and feta borekas at the Art Cafe, housed in an old Victorian house on South Broadway. Later, sample adobo pork belly or fried mini pork egg rolls with a spicy banana ketchup at the Filipino-inspired Karenderya.

Start your morning at Boxer Donut and Espresso Bar with a strong cup of coffee (made with Stumptown Coffee Roasters) and a classic doughnut like the cruller, or something a bit more inventive (hello caramel corn doughnut). For dessert (or breakfast, we won’t judge), dig into a slice of apple or berry pie at Pie Lady & Son on Main Street.

Channel your inner art aficionado and visit the childhood home of Edward Hopper, where he spent the first 28 years of his life. Walk up the wooden stairs of the The Edward Hopper House and into what was the painter’s bedroom where an easel in the corner and a view of the Hudson River from the windows make it easy to imagine what life must have been like for the famous artist.

Later, walk to Memorial Park, which slopes down to the river and offers a calm place to take in the lapping waves. In the summer, the park plays host to a weekly concert series.

If you’re feeling more adventurous, head a few miles up the road to Hook Mountain State Park where you can hike (the southernmost summit is 728 feet high) or go for a stroll along the river. Later, get out on the river itself by heading out on a Nyack Boat Charter public sail, which includes local craft beer, regional wine, and appetizers.

How to get there

Nyack is reachable from the city by car (it’s under an hour to drive, without traffic) or by a 45-minute train ride on Metro-North from Grand Central Terminal to Tarrytown, plus a 15-minute cab ride from the station. 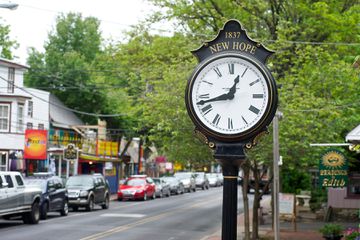 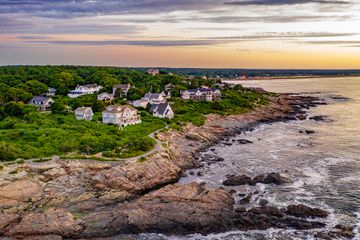 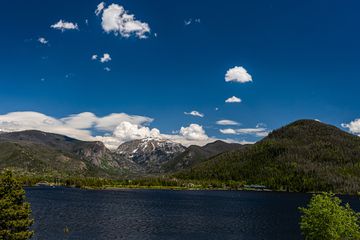