See This Year's Turkeys Pardoned by the President Get the Star Treatment in a Luxury Washington D.C. Hotel

Thanksgiving isn’t usually the best day to be a turkey, but for turkeys Chocolate and Chip, it meant a day out on the town in Washington D.C.

The pair of turkeys, chosen for this year’s annual White House turkey pardoning ceremony, were offered a reprieve from President Joe Biden and given the star treatment at the Willard InterContinental hotel. And boy, did they live it up.

The two turkeys arrived to a red carpet welcome at the hotel with plenty of photo-taking fans waiting, according to a video posted to the National Turkey Federation’s Instagram page. A member of the hotel’s staff showed them a map (in case they wanted to see the sights) and then they were ushered into their room, which had been thoughtfully covered in wood chips to make their stay uniquely comfortable.

To prepare for their time in Washington, Chocolate and Chip listened to music in anticipation of the crowd noise and hung out with some children, which Biden joked “sounds like another flock hoping to come to Washington in 2024.”

Chocolate and Chip, who traveled all the way from North Carolina for the annual ceremony, will now live out their lives at the Talley Turkey Education Unit at North Carolina State University in Raleigh.

“After receiving their presidential pardons today, Chocolate and Chip are going to head to [one of] the nation’s great basketball schools and research universities: North Carolina State,” Biden said during the ceremony. “Now, when we told them they were joining the Wolfpack, they got a little scared. But then we explained it was just a mascot for the school.  It has one of the nation’s best poultry science departments in the country.

“And now, based on their temperament and commitment to being productive members of society, I hereby pardon… Chocolate and Chip,” he added.

During their retirement, the turkeys will have time to enjoy their hobbies. Chocolate, for example, loves to catch some sun on the Outer Banks, while Chip loves barbecue and basketball.

The turkey pardon is an annual tradition dating back to President Abraham Lincoln, who spared a turkey's life after it was brought to him for Christmas dinner — and later declared Thanksgiving a national holiday — according to Town & Country's history of the event.President George H. W. Bush then became the first president to officially grant a turkey the Presidential pardon. 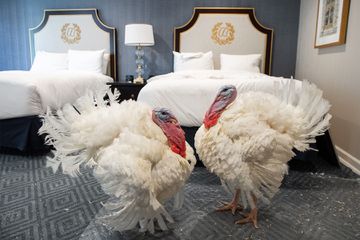