Nicaragua's remote Costa Dulce ecolodge hosts week-long yoga and surf retreats year-round. This is what it's like to visit during the COVID-19 pandemic.

"I didn't promise it wouldn't kill you," our leader, a tan, toned demigoddess in a leopard print bikini laughs. For Tara, a temezcal ceremony is just another Friday. For me, it's just the difference between life and death. In fact, I'm not entirely sure I haven't died and gone to hell inside this tiny sweat lodge. The irony that it's shaped like an igloo isn't lost on me. Forty-five transformative minutes of sweating out past mistakes and old heartbreaks is the culmination of a week spent at a Costa Dulce, a yoga and surf retreat in Nicaragua.

Costa Dulce, which translates to sweet coast in English, was one of the first ecolodges built on a remote beach 10 miles south of San Juan Del Sur. Eight years ago I left New York City and tried to live in this expat-filled fishing village. I lasted one season... but I've always longed to revisit the land of lakes and volcanoes. When I learned one of the pioneers of paddleboard yoga, Jessica Bellofatto, was hosting a yoga and surf retreat here in January, I signed up. Unfortunately for me, just a week before the retreat, President Biden signed an executive order. Travelers now needed a negative COVID-19 test to enter the U.S. Jessica moved her retreat to Puerto Rico. My heart set on returning to Nicaragua, I reached out to Costa Dulce. It lacked a headliner like Jessica. However, it hosts week-long yoga and surf retreats year-round (from $1,100/person).

Merriam-Webster first defines retreat as "an act or process of withdrawing especially from what is difficult, dangerous, or disagreeable." Naysayers may point out that going to a retreat during a pandemic is risky. But what if it's the pandemic you're retreating from? Naturally, it helps if your retreat takes place in isolation. Located in a private, gated community at the end of a dirt road that only the locals know and a 4x4 SUV can survive, Costa Dulce is perched high above a secluded beach. It's only visible by boat or plane.

The property's dozen or so employees, and a passionate sea turtle conservationist who takes care of its hatchery, live on site. I am one of only seven guests; during a normal year they'd have at least 20. My new friends include a young couple from the U.K. who work on superyachts, a father and his teenage son from Colorado, and two professional women in their 30s from Canada. All of us tested negative for COVID-19 per Nicaragua's entry requirements. Most are here for a month to take advantage of Costa Dulce's new residency program for remote workers ($2,000/month). With the exception of the sweat lodge — which seems too inhospitable an environment for most viruses — indoor interactions are limited.

Our day starts in the rooftop, wall-free yoga shala which looks out over the jungle and the ocean. We can see Costa Rica in the distance, and when we're lucky, whales breaching. The views distract me from my morning meditation. I almost physically can't close my eyes. In the midst of such scenery, it seems sacrilegious. Our meals are served on the deck overlooking the outdoor pool and bar. Our afternoons are spent catching waves — or in my case, struggling to stand on a moving board determined to nosedive. After sunset we can all be found in our respective outdoor showers, rinsing off the sand and surf before gathering on the deck. Here, we relive our day over plates of nourishing Nicaraguan food. We wash it down with ice cold beer we help ourselves to from the honor bar.

Costa Dulce has 13 solar-powered cabins, most with ocean views and none with AC, TV, or other unnecessary creature comforts. But that's not to say it's not comfortable. The cabins are all en suites with ceiling fans. And there are plenty of creatures. One night I walk into the kitchen only to be met by the resident skunk. He's friendly and knows how to slide open the screen door with his nose.

Our meals, mostly vegetarian and organic, are prepared by masked chefs. They're the same women who clean our rooms during the day and give us massages in the open-air spa. They work hard, but I can tell they're happy by their tenure. Freddy, a 20-year-old local who takes me out at sunrise one morning for a private lesson in both surfing and Spanish, has worked at Costa Dulce since he was 15. Many of my retreat breakthroughs — including realizing that I need to take time to read the wave, or situation in life, before attempting to conquer it — occur out on the water. However, most take place during yoga.

"The first rule here is never take yourself too seriously," says Paul, our towering, tattooed yoga instructor. He likes to take his shirt off, tie it around his eyes so he can't see, and encourage us to dance with him like no one is watching. Paul is originally from Yorkshire but spends most of his time talking about his experience working in security in Afghanistan and Libya before studying yoga in India and going on to teach in Thailand and Italy. He's the kind of yogi who you're more likely to find in a pub in Laos than an Athleta in Los Angeles. His wife Katja, a striking German woman with an impressive military background, is in charge of guest relations at Costa Dulce. She's also a yogi. Together they founded Yoganity, a new philosophy combining yoga and humanity.

It's during Katja's vinyasa class that I get to do something I've never had the chance to do in yoga before: freestyle. In most yoga classes, you're guided through the set poses, or asanas. But on this day, Katja gives us a solid 10 minutes in the middle of class to go with our own flow. I can't believe she is leaving us to our own devices. None of us are seasoned yogis who can whip out a headstand on command. We can hardly touch our toes! Does it feel weird? Yes. Are we in sync? Hardly. Do I fall out of a pose? Several.

But that's life. Most of the time no one is there to hold your hand, especially during a pandemic when hand washing replaces hand holding. Paul and Katja make it very clear from day one that we are going to find ourselves in challenging poses throughout the week. They also make it clear the key to mastering them is mastering our breath. It's the one thing we can control.

Breath is another thing that's become almost taboo in the last 12 months. We now spend hours every day inhaling through a barrier and exhaling through a barrier. But at Costa Dulce, we take off our masks to learn the art of the lion breath, among other pranayamas or breath exercises. Imagine sitting on your knees, inhaling until your lungs feel like they're going to burst, focusing on your third eye (whatever that is), and then at the last minute, exhaling while making a loud, primal, "rah-meets-ha" sound. Lion's breath is thought to relieve stress, expel toxins, and boost energy levels. I may look like a fool doing it, but I feel a lot lighter and less lethargic afterward.

Now, staggering out of the sweat lodge, I'm so weightless and alive I wonder if I'll see Tinkerbell when I look in the mirror. Feeling reborn, I baptize myself in the infinity pool just as the sun sinks below the Pacific. The rest of the sweat lodge survivors, and there are no casualties, follow Tara into the ocean. I take this time, alone, to reflect on the past 45 minutes. While it seemed like every other agonizing second was spent battling long-buried inner demons demanding I bolt for the exit, there were some almost enjoyable aspects. We got to beat on empty plastic water bottles used as drums. We got to sing and chant about letting go of things that no longer serve us. The British woman's voice was so hauntingly good it warranted goosebumps under any other circumstance.

The whole experience reminded me of one of my least-favorite sayings: "Better the devil you know than the devil you don't." In this case, the devil I knew was my old self: an unfulfilled, exhausted woman waiting for me to escape the sweat lodge early and go back to feeling like a perpetual victim of the pandemic, and life in general. The devil I didn't know was the sweat lodge and the woman I'd start to become in there when I realized I had what it takes, at least mentally, to make it. Knowing how to master my breath, and in doing so, bring down my panicked, elevated heart rate, definitely helped.

I don't think I would have lasted the entire ceremony without learning what I'd learned, whether on a wave or in warrior pose, in the preceding days. I think that's the difference between giving yourself the gift of a day off and the gift of several days off. Whether it's for a weekend or a full week, a retreat is the greatest selfish gift that keeps on giving. For me, it's the key to a better life that keeps on living. 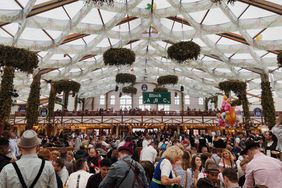 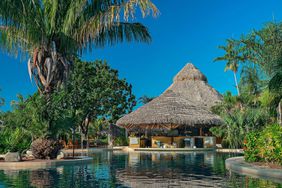 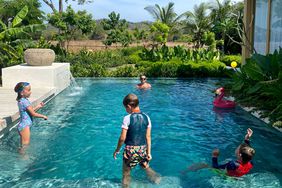