On a Winter Trip to Ottawa, I Rediscovered the Joy of Ice Skating Through My Daughter’s Eyes

On her 1971 album, Blue, a heartsick Joni Mitchell sings: "Oh I wish I had a river I could skate away on." The sleeve of Hejira, a later album, shows a Joel Bernstein photograph of Mitchell gliding across Wisconsin's Lake Mendota in a black skirt, shawl, and men's skates. Mitchell is Canadian, as am I, and loves to skate, as do I.

"I wish I had a river so long/I would teach my feet to fly." The song loops in my head as I sign my six-year-old daughter out of school a few hours early to catch a flight from New York City to Ottawa. It's mid-February, and I want to take her skating on the Rideau Canal—the oldest man-made waterway in North America, and a UNESCO World Heritage site.

"It's almost five miles long," I tell her. "The world's biggest ice-skating rink." I want to teach her feet to fly, too.

Ottawa, the capital of Canada, is usually seen as a square, political town, one that features in history lessons and seventh-grade overnight trips—a little like the way Washington, D.C., is seen by the rest of America. But it's a rewarding place to revisit as an adult.

A city of more than a million, Ottawa is bilingual and ethnically diverse, with a visible First Nations population. There are daily demonstrations and outraged opinion pages, signs of a healthy sense of civic freedom. Despite the Gothic green-gabled buildings of Parliament and the many excellent museums, the city lacks pretension and, instead, has more of a Bob and Doug McKenzie sense of principled self-deprecation. (If you don't know who Bob and Doug are, I urge you to stop reading and stream Strange Brew, their beer-burping interpretation of Hamlet.)

We're staying at the Fairmont Château Laurier, a grand hotel that sits near where the Rideau Canal meets the Ottawa River, which divides French-speaking from English-speaking Canada. The property is named after Canada's seventh prime minister, Wilfrid Laurier, and is one of a string of properties built at the turn of the 20th century along the then-burgeoning Canadian National Railway. The Château is a massive, turreted building, with Tiffany-glass windows, vast chandeliers, and endless carpeted hallways.

Our suite is the size of my New York apartment. It has a small tower alcove, a fireplace, and infinite closets. I look up some archival photos of the hotel. The décor in the pictures reminds me of the handsome, oak-paneled staterooms on the Titanic. This isn't necessarily a coincidence. The man who commissioned the construction of the hotel, Charles Melville Hays, president of the Grand Trunk Railways, went down with the ship on his way home to Canada for the Château's opening in 1912. His cargo is said to have included furnishings for the hotel.

We wake to a forecast of −13 degrees. After breakfast (shakshuka, oatmeal, coffee) we layer on leggings, snowsuits, and mittens. I stuff hand warmers into my pockets for later, and we take a quick cab ride to the skate rental at Dow's Lake, which adjoins the Rideau Canal. Because of the temperature, not many skaters are out, and the ice seems vast, smooth, blinding in the sunshine. My daughter takes a few steps in her skates and freaks out, so I rent a little cutter—a wooden sled on thin skis—to push her along. At this, she is delighted.

Related: You Can Ice-skate Along a Fire-Lit Trail In Canada

We come across scenic medians dotted along the ice: piles of snow on which the city has set up discarded Christmas trees to create small forest scenes. After 15 minutes or so, we scrape to a stop at one of the designated rest areas along the route, where a wood-burning stove throws enough heat for us to take our hoods down. From a kiosk I fetch my daughter a BeaverTail, a flat, deep-fried piece of dough dusted in cinnamon sugar.

We set off again, the air like a blade on my cheeks. The speed we gather is particular to skating; it's nothing like running, or if it is, it's like running downhill, on fresh green grass. I slow to catch my breath, from both exertion and exhilaration. My daughter twists around in her chair. "Can we go swimming?" She means in the pool at the hotel, a high-ceilinged, marble-and-tile Art Deco gem. I think of the humid air, and nod.

A cousin of mine who lives in Ottawa had told me about his "Shwarmageddon" dinner parties and recommended the city's Lebanese food. So lunch is falafel, tzatziki, and poutine at Oh My Grill, a new takeout spot run by Ali Al-Tawil, the son of Lebanese immigrants, in the ByWard Market. My daughter gushes over how delicious her bottle of Lipton iced tea is, and hand to heart, I have never had a better falafel sandwich. I ask Al-Tawil why it's so good.

"It's my mother's recipe," he says. "She has a marinade and uses these," he adds, pointing to a can of seasoned bread crumbs on a shelf. The tzatziki is served with thick Greek pita, and Al-Tawil's presentation makes it irresistible.

Ottawa's Lebanese population boomed after their civil war began in 1975, when Canada set up special programs to expedite emigration. The city also has a large Vietnamese community, thanks to Canada's humanitarian response to the Southeast Asian refugee crisis in the late 1970s and early 80s.

That night we order noodles and bubble tea from Saigon Pho, which I pair with the Château's mini-bar red. Fat snowflakes swirl past our windows. Across the street is a grand, turn-of-the-century government building with a sign that reads simply NATIONAL HEADQUARTERS.

I go to bed with a feeling familiar from growing up half-Filipino in a suburb of Toronto: British subject outside, outsider inside. I think back to my visits to Nepean, a suburb of Ottawa, for swim meets as a teenager. I'd come a couple of times a year, stay in a hotel with other girls, discover a new independence.

We wake to a forecast of −13 degrees. Because of the temperature, not many skaters are out, and the ice seems vast, smooth, blinding in the sunshine.

Somehow, in that different setting, I'd always improve on the lap times I recorded back in the green-tiled university pool. It's been an important, symbolic place to me, and I'm happy to be here now with my daughter, my family.

The temperature goes up a few degrees on our last day. We've arrived in Ottawa in time to catch the end of Winterlude, the city's annual ice festival. There are tube rides down slides carved out of packed snow, ziplines, igloos, drums, and snow lollies made with maple syrup. The rink is busy. I leave my daughter at a canalside café with her cousins and a mug of cocoa, and go for a solo skate. This time I head downtown, slicing through the Glebe, Sandy Hill, and Old Ottawa East neighborhoods, past inlets and creeks, beneath bridges.

The wind at my back pushes me along as I glide, a feeling like sailing, or flying. Joni was right: a river is the best place to skate away, from America, from my own puny woes, the liars and the bullies, the grief and the loss. I return pink-cheeked to my daughter, and we pack up to visit friends on Meech Lake, a summer resort spot just across the river in Quebec.

We find the lake frozen solid and carpeted with snow. As the sun sets we strap snowshoes to our feet. "I'm walking to the other side and back," my daughter insists, and sets off in her full-face balaclava and snowsuit. A single cross-country skier flies past and waves as we cross the ice beneath a pink and purple sky.

A Wintry Weekend in Ottawa

The Fairmont Château Laurier (doubles from $190) is the classic place to stay: the imposing architecture and ornate guest rooms have earned the hotel the nickname "Ottawa's Castle."

The Rideau Canal Skateway operates from February to mid March, depending on the weather. Rent skates from the pavilion on Dow's Lake, at the canal's southwestern end, before gliding down the frozen five-mile waterway.

Warm up over lunch at By Ward Market, where you'll find some of the best food stalls and specialty stores in town—including the transcendent Oh My Grill (169 York St.; 613-562-4545; entrées$5–$12). Saigon Pho (entrées $10–$19) serves excellent, authentic Vietnamese food.

A version of this story first appeared in the November 2020 issue of Travel + Leisure under the headline Skating Away. 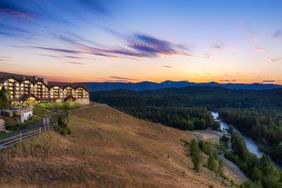 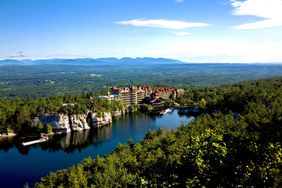 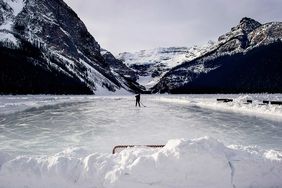 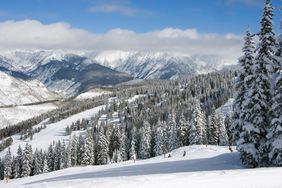