Some of New York State’s Best Restaurants, Historic Sites, and Cultural Institutions Are Just a Short Trip From the City

Blue Hill at Stone Barns in Pocantico Hills, New York was recently named one of the World’s Best Restaurants by Travel + Leisure and Food & Wine. It’s worth planning a trip around — here’s what you should explore once you’re there.

Westchester County is often overlooked by travelers to New York — but this region north of the city has long been a cultural mecca, the stomping grounds of Washington Irving, Aaron Copland, and now, Dan Barber.

Once you’ve had your fill at Blue Hill at Stone Barns, in the small hamlet of Pocantico Hills, head into Tarrytown, one of the most scenic river towns on this part of the Hudson. Fuel up at creative hub Coffee Labs Roasters, at the top of Main Street, and search the community bulletin board for local arts happenings. Then, wander down the hill to check the schedule at Tarrytown Music Hall, a recently refurbished 1885 theatre. You can grab an early lunch at specialty food stop Mint Premium Foods — don’t skip the cheese counter — or move on to Main Street Sweets, a perfectly kitschy small town ice cream shop that has been scooping the area’s best homemade frozen treats for nearly two decades.

Nearby Pleasantville is also worth a visit. Its creative claim to fame these days is leading independent cinema destination Jacob Burns Film Center­. Built in 1925 as the Rome Theater, it sat vacant from 1987 until its rebirth in 2001. At the town’s historic stone train station, you’ll find the new raw bar and cocktail spot Pubstreet and the Pleasantville Farmers Market, one of the county’s best, set up in the parking lot on summer Saturdays. Be sure to reserve time to peruse the Village Bookstore, a 50-year-old independent shop that’s anchored the village despite several changes in ownership and location over time.

It’s easy to reach this part of the Hudson Valley on the Metro-North commuter railroad; take the Hudson Line to Tarrytown or the Harlem Line to Pleasantville. Taxis and rideshares are readily available, though those interested in meandering may want to rent a car. The trendy hotels are back in NYC, but Tarrytown House is an elegant place to spend the night — stay in the King House Mansion, a fully restored Georgian-style manor built in the 1840s.

Read about Blue Hill at Stone Barns and the rest of the World’s Best Restaurants here. 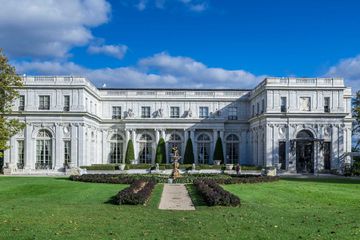