We all want to know: What kind of trouble can you get into if you’re caught?

With so much information circulating the internet on “how to” join, it's obvious people are intrigued by the Mile High Club, even if they have yet to join. But what are the rules on airlines? How much trouble could you get in? While it might sound fun and exciting, no one wants to get arrested for getting busy on a plane.

When it comes to repercussions for joining the club, reports are thoroughly mixed. Just this past March, two strangers met on a Virgin Atlantic flight, only to hook up in the bathroom mid-air. The couple later got into a squabble back in their seats. Upon arrival in their destination, the female passenger was detained for behaving, “in an abusive and threatening manner which severely disrupted the flight."

Norm Pattis, a criminal attorney, told Travel + Leisure that banning passengers for unsavory behavior is within airlines' rights. “Airlines can prohibit folks from using their services so long as they don’t discriminate for prohibited reasons, such as age, gender or disability,” he said. “If you’re a victim of airline coitus interruptus, the airline can issue you a notice not to return. Most courts would enforce the ban.”

Clemens Sehi, a travel writer and creative director at Travellers Archive, brings up a 2015 story, where a flight attendant was charging a fee for entry into the Mile High Club. She wound up making nearly $2,400 per flight by charging for sexual services. Upon discovery, she was dismissed from her duties. This, of course, is an extreme case.

Christy* (not her real name), a current full-time flight attendant for a major U.S. airline tells T+L she didn’t receive any specific training, “I honestly don’t think our airline has specific guidelines on this. It’s more of a, ‘If you see it, stop it,’ kind of policy,” she said. “Of course, as flight attendants, we do have the authority to have police meet the aircraft. If it’s indecent exposure, you could get fined for that. But I don’t believe the airline fines passengers for getting freaky in the lavatories.”

Is this something flight attendants are taught to look out for as part of general practice? By all accounts, the answer appears to be “No.”

Brian Palmer addressed these issues in 2011 Slate article: “Apparently the issue isn't directly addressed in flight attendant school, but attendants generally ‘knock, inquire politely, and barge in if necessary.’” Certainly to some passengers, this sort of light acknowledgement almost feels like an invitation to press your luck.

Here is the bottom line: When it comes to the Mile High Club, if you’re doing it in the bathroom, you likely can’t get in any serious trouble. You could be banned from the airline, maybe, but even that is pretty unlikely.

While nearly every airline we reached out to declined to comment, American Airlines responded to our query, adding a little color to this notably shady story. Ross Feinstein, a spokesman for American Airlines said, “The only club American recommends is the Admirals Club.”

Sehi says there are no official consequences, only general practices carried out to each airline’s discretion. “Interestingly, you do not really have to expect real consequences, except a warning and evil looks. While Lufthansa does not rule out that sexual acts of passengers are reported because of the violation of manners, Singapore Airlines handles this differently. If fellow passengers feel disturbed, stewardesses simply offer a drink to the troublemakers to get them out of the lavatory.”

T+L reached out to Lufthansa for comment, but received no reply.

Although attempting to join the club in the lavatory is unlikely to land you in jail, there could be serious legal ramifications should you try anything out in the open. Pattis told T+L that airplane sex could be considered a felony offense, but only if you’re caught doing it in public, as in, in your seat, in front of other people. “You must be caught in the act to make a convincing criminal prosecution.”

Our main question after all of this: How do two people fit inside an airplane lavatory? Christy thinks the tiny bathrooms on airplanes are no accident. “A senior flight attendant told me in the old days, when airplane lavatories were much larger, it was a very common thing. Downsizing lavatories might be a reason we don’t see it that much anymore.”

As far as we can gather from recent news stories, small bathrooms are not going to stop people from trying. If you’re looking to get busy on an airplane, do it in the bathroom and prepare yourself for possible embarrassment (and a strained back). 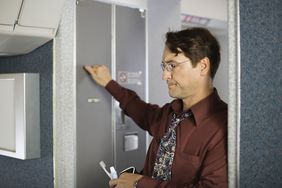 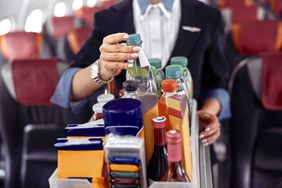 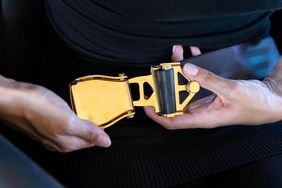 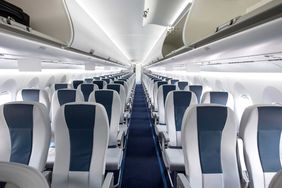 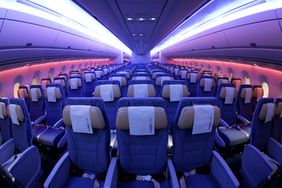 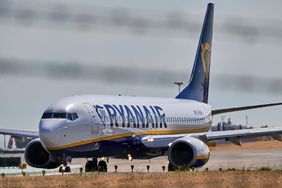