You never know what you’ll find on the beaches of Tasmania. As I picked my way along the crashing surf line, weaving among giant boulders tinted orange from an exotic lichen called xanthoria, I stumbled across strange natural treasures: the intact exoskeleton of a seahorse, as fine and translucent as a sliver of Greek marble; enormous heads of seaweed decorated with delicate sea eggs; strands of white sponge that sailors dubbed “dead men’s fingers.” Then my guide, an Aboriginal elder named Clyde Mansell, pointed out mysterious formations poking through the brush: shell dumps created by his ancestors centuries ago. It was stunning even by my own Aussie-raised standards, but that wildness is precisely Tasmania’s appeal.

“They said we Palawa were all wiped out,” Mansell told me, referring to the brutal frontier war conducted in the early 19th century by British soldiers and settlers against his people, the first Tasmanians, who had lived in isolation along these shores since the land bridge to the mainland flooded some 10,000 years ago. “Well, they sure bloody tried. Obviously,” he added dryly, “they were mistaken.” I’d first learned about the decimated Palawa population as a schoolboy in Sydney. A woman known as Truganini, believed by many to be the last full-blooded Tasmanian, died in 1876, and white officials argued that the race had become extinct. But there were mixed-race survivors on outlying islands and in sealing camps who carried on the community’s customs.

I had met Mansell and other elders at the Aboriginal Elders Center, in Launceston, where I was outfitted for a new four-day hike called the Wukalina Walk, which they had created along the heart-shaped island’s northeast coast.

The most ambitious entry in the Australia-wide boom in indigenous tourism, the walk represents a movement over recent years to acknowledge—and hopefully go some way toward repairing—past colonial wrongs. Today, every government meeting or cultural gathering begins by recognizing that the event is occurring on Aboriginal land. It may sound like lip service, but it indicates a striking shift in the attitudes of the dominant Anglo-Australian society.

Before embarking on the journey, Aboriginal guides wave smoking eucalyptus branches over visitors as a cleansing ceremony and perform a ritual “Welcome to Country,” an address that pays respect to the local indigenous groups. Shortly after, Mansell and I hiked the shoreline while wallabies bounded nearby. The biggest surprise came when we meandered 100 yards from the beach to Krakani Lumi, a chic wooden eco-lodge. “Fifteen years in the making!” Mansell said proudly. The elegant main structure, with a hemispherical indentation that echoes the shape of Palawa huts, serves as an amphitheater. Guests sit in a semicircle around a campfire, listening to guides tell stories and learning ancient crafts. Five cozy cabins of the same style dot the bush nearby.

Hiking along the coast the next day, I thought the bone-white sands and aquamarine waters looked closer to Bora-Bora than Tasmania, whose winds blast straight from the icy Southern Ocean. The most awe-inspiring stretch, the Bay of Fires, takes its name from the British explorer Tobias Furneaux, who passed in 1773 and saw Aboriginal campfires flickering in the bush. Back at the lodge, we sat down to a feast of barbecued scallops, oysters, crayfish, kangaroo meat, and damper, a bowling ball-sized lump of flour roasted by the campfire into a moist, delicious bread.

I spent the final night at the Eddystone Point Lighthouse, which has a set of granite cottages on the Larapuna promontory that were originally built for keepers and their families in the late 19th century. Today, the Victorian-era rooms have been kitted out with luxe beds and decorated with Aboriginal paintings. That evening, I returned to the headland to imagine the campfires that once burned here. It had been a rare privilege to be with the Palawa and glimpse how they’re reviving their ancient culture in modern Australia.

The Wukalina Walk is offered September through April; four days from $1,690 per person, all-inclusive. 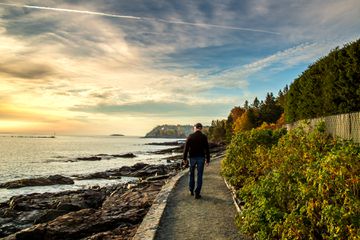 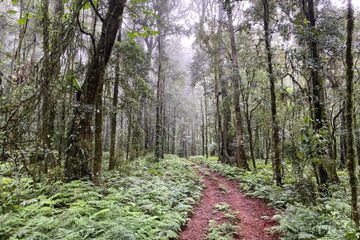 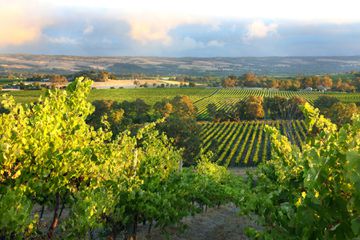 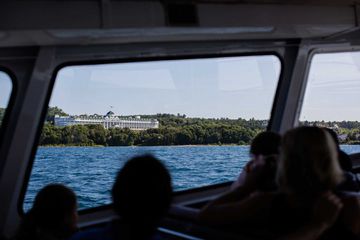