How to Explore the Philippine Islands

There may be no better place to island hop than in the Philippines. After all, the Southeast Asian country is made up of well over 7,000 islands. The country is ethnically and culturally diverse, with influences from as near as China and as far away as Spain. Most visitors to the Philippines arrive in busy Manila, the capital located on the island of Luzon. From here, travelers can branch out with inter-island flights and boats to other areas of the country, like the pristine, Eden-like islands of Boracay and Palawan, where you’ll find spectacular beaches and teeming, lush jungles. Or head to Siquijor (an island known for mysticism) and hilly Bohol. Regardless of which islands you choose to visit on your adventure to the Philippines, plan ahead. Be sure to pack the tropical essentials, like shoes fit for rough marine terrain, hiking boots, and light clothing. And remember to field tips from the locals upon arriving at a new island. After all, there's a lot to uncover here, from regional cuisines and festivals to natural areas perfect for hiking and diving. But consider this your introduction to island hopping in the Philippines.

The largest and most populous of the Philippine islands, Luzon will likely be your first destination during a trip to the Philippines. The capital city, Manila, is home to a vibrant food and arts scene and landmarks such as the walled city of Intramuros, which recalls the country’s Spanish colonial past. Head north on the island and you’ll find 2,000-year-old rice terraces carved into lush green mountainsides.

Just off the northern coast of Luzon is a tiny island known as Palaui. Remote and essentially untouched, Palaui is home to rare plant and animal species found nowhere else. Cape Engaño, on the island’s northern tip, is home to an abandoned Spanish lighthouse complex that looks out to the sea.

If white sand beaches are more your thing, then the petite island of Boracay is a perfect fit. Known for possessing some of the world’s most relaxing stretches of sand, Boracay is an island where travelers can truly unwind. Head to Cagban Beach for a secluded afternoon, or White Beach when you're ready for the island's nightlife scene.

On the western skirts of the archipelago is Palawan, which was hailed as the No. 1 island on Earth in Travel + Leisure's 2017 World's Best Awards. Rich in history, the story of Palawan can be traced back to indigenous settlers, and later Malay seafarers (who introduced Buddhism). The island was later visited by the Spaniards, the Americans, and the Japanese. The municipality of El Nido is widely regarded for its beautiful beaches and diverse ecosystem, which is under protected status. Here you’ll find turquoise lagoons, limestone cliffs, dense mangrove forests, and one of the world's longest subterranean rivers.

Should you be hopping the islands in search of the mystical, go ashore on Siquijor, just south of Bohol. Witch doctors, known at boroboros, are easily found on the island and tourists arrive to seek out their spiritual advice. There are also frequent festivals that focus on ancient healing rituals.

The small island of Camiguin lies on the Pacific Ring of Fire, and on its northern edge is Mount Hibok-Hibok, the island’s only active volcano. Easily seen from one of the many virtually untouched beaches, Mount Hibok-Hibok last erupted in 1951. Today, visitors can view its wide, tree-lined crater from the Yumbing Trail. Camiguin is also host to the Lanzones Festival, an October celebration of a fruit native to the island.

Negros is the fourth largest island in the Philippines and is home to both bustling city centers as well as idyllic beaches. The city of Bacolod is considered to be one of the country’s most livable cities, and is home to the MassKara Festival. This street festival is based on masks that share many similarities with Carnival. Just outside the city, take a drive through the vast sugarcane fields.

Cebu, like Luzon, is a cultural and commercial hub. In Cebu City, you will find landmarks like Fort San Pedro (a relic of the island's Spanish past), the Cebu Taoist Temple (built by the island’s Chinese community) and Magellan’s Cross (brought to the island by the famed explorer in 1521). Visitors in Cebu during the month of January should be on the lookout for Sinulog, a colorful festival that draws millions of people every year.

Situated in the Visayan Sea north of Cebu, Malapascua is too-overlooked. Serious divers, however, should make the island a priority, thanks to the organized thresher shark dives. The peculiar shark gathers in large numbers in the waters of Monad Shoal.

Easily accessible by plane from Manila, Mindoro is home to submerged atolls and coral reefs that provide ample opportunities for serious scuba diving and snorkeling. Apo Reef National Park, on the island’s western coast, is a highlight.

In the country’s south is one of the largest Philippine islands, Mindanao. Though known as a place of social and political instability, Mindanao's semi-active volcano, Mount Apo, attracts the most adventurous travelers. It's the highest point in the Philippines, and is home to many rare animal species, which makes for excellent hiking and rewarding views.

Perhaps no Pacific island is complete without a spot for surfing. Siargao is a small island just north of Mindanao that draws surfers who hope to catch the famous “Cloud 9” wave: a challenging, thick wave break. Of course, you don't need to be seeking thrills to appreciate the pristine white beaches along the island’s coast.

Though not a single island, the Batanes archipelago region is a distinct destination for travelers with time to reach the country's northernmost reaches. Here, it’s more about mountains and green hills than it is about beach and sun. Cooler and rainier than the rest of the country, Batanes offers visitors a look at a less conventional side of the Philippines. 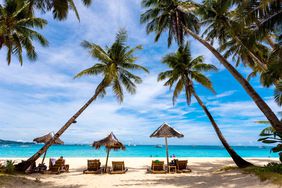 A Guide to Vacationing in Boracay 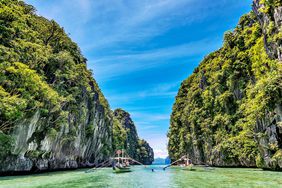 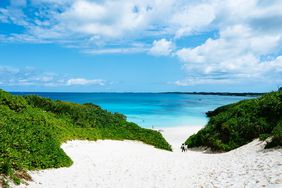