Designed in 1821 by an architect named Alexander Ralston, the city of Indianapolis is blessed with lush green public parks, abundant memorials and monuments, and a scenic riverfront that visitors can follow all the way to the zoo. In short, there’s something for everyone here (not to mention plenty of charm).

27 Fun Things to Do in Colorado Springs

Fun things to do in Indianapolis include world-class museums, catching strikes at an original 1920s bowling alley, and taking advantage of the popular bikeshare program. If you’re planning a vacation in Indianapolis in the coming year, here’s the good news: it’s on the rise. With dozens of new development projects, including a refurbished cabaret theater, a new bus transit system, and an incendiary food scene, there’s never been a better time to visit the Hoosier state.

Where Is Indianapolis, Indiana?

Roughly equidistant from Chicago and Columbus, Indianapolis sits in the middle of Indiana, and its climate mirrors that of surrounding states, with four distinct seasons. Typical of most spread-out Midwestern cities, it comprises smaller neighborhoods, several of which overlook the scenic White River. While Indiana is too-often considered a drive-through state, its capital city is quickly becoming a destination in its own right, full of culture and pride, with enough attractions to fill up a weekend or a week’s worth of vacation time.

One of Indianapolis’ most unique attractions is the Cultural Trail. Noted for its 10 public art installations, the trail links Fountain Square and White River State Park to downtown via an eight-mile urban bike and hiking path. It also pairs great with Indy’s Pacers Bikeshare program, as most of the 29 bike rental stations are located on or within a few blocks of the trail.

When it debuts, The Idle — a new public park built off the Cultural Trail — will offer an unusual perspective on the urban landscape when it opens this fall. The Idle will be surrounded by two interstate highways, and visitors will be able to enjoy the sight of moving cars while safely seated on a park bench.

At the iconic Children’s Museum of Indianapolis, 120,000 artifacts ranging from retro Barbies and prewar toy trains to Samurai suits of armor (and a T. Rex that was discovered in the badlands of South Dakota) make this a learning experience for museum goers of all ages. Focusing on the arts, humanities, and archeology, the facility opened in 1925, and remains the biggest children’s museum in the world. Next March, the new Sports Legends Experience will add interactive outdoor and indoor experiences like mini golf and an Indianapolis Motor Speedway pedal car racetrack.

What started in 1883 as a small group of citizens gathering to appreciate fine art morphed into the Indianapolis Museum of Art, a must-see attraction just north of downtown. The encyclopedic collection houses American Impressionist paintings, ancient Greek pottery, and works by Rembrandt, El Greco, and Caravaggio. If you’re feeling antsy, go outside and wander through the 100-acre nature park that borders the museum.

Major Events and Festivals in Indianapolis

Perhaps the event Indianapolis is best known for, the Indy 500 is ranked along with the Monaco Grand Prix and the 24 Hours of Le Mans as three of the most important automobile races in the world. In the spirit of fast cars, the 500 Festival runs all month long in May, featuring a grand parade with floats, antique cars, and a marching band, and culminating with the big race over Memorial Day Weekend (ticket sales are already open for 2018). Tours of the speedway are available throughout the year.

Downtown’s Monument Circle is easy enough to find, as it’s anchored by a 284-foot-tall monument (which has an observation deck at the top) commemorating Indiana soldiers who fought in the Revolutionary War, the War of 1812, and the Civil War. During Circle of Lights in November, tens of thousands gather to see the monument get lit up for the holidays with more than 4,000 colored lights.

If you’re curious how beers from other states — not just Indiana — taste, then head to the Sun King Canvitational, which showcases over 50 different breweries from around the country. The annual event takes places at the Pan Am Plaza each September, and since nothing pairs with craft ale better than food trucks, expect plenty of those, too.

Travelers in town during the Fourth of July should head to downtown Indy for an impressive fireworks display. Get the best views from the Indiana Originals Marketplace.

Within walking distance of downtown, Fountain Square is a lively historic neighborhood bursting with creativity. Here, you can stroll in and out of antique and clothing shops during the day and, in the evening, check out live entertainment at places like The White Rabbit. Looking to pick up a souvenir? Try Vintage Vogue for one-off designer finds, Game Paradise (a library of game boards), and everything from handmade soap to home decor at Lily’s Soap Kitchen & Artisan Market.

Meanwhile, in the budding cultural hub of Broad Ripple Village, the choice is almost overwhelming. With Broad Ripple Avenue as the main thoroughfare, you’ll pass everything from high-style boutiques to natural food stores and outdoor gear shops. Across the river, 8Fifteen remains one of Indy’s best-loved boutiques, offering luxury women's clothing and accessories by labels like Isabel Marant, Raquel Allegra, and Mother Denim.

Indianapolis’ love of good beer and fresh-baked bread has made it a trusted stopover for fans of Midwest-style comfort food. Now, as a new set of culinary masters — like Jonathan Brooks (voted Best New Chef by Food & Wine magazine), and Ukiyo’s Neal Brown — takes hold of the city, a diverse collection of restaurants is turning Indianapolis into one of the most exciting places to eat.

For a fun night of drinking, you can’t go wrong in this relaxed, fun-loving city. And knowing how seriously Midwesterners take their beer, a good place to start would be Tomlinson Tap: an old-school pub that stocks only Indiana-made beers. While you’re there, you’ll get treated to a mini history lesson (the taproom is located above City Market, a bustling hall with 37 merchants that’s been in business since 1886).

Locals have a lot of pride for Sun King Brewery, one of the city’s award-winning breweries and the host of the Midwest’s largest canned craft beer festival. The facility’s downtown tasting room is a great place to try a flight sampler of hits like the Sunlight Cream Ale or the Wee Mac Scottish Ale, or just fill up a growler to take back to your hotel.

Over in Fountain Square, New Day Craft is the spot for lovers of craft mead: a honey-based alcohol that appeals to beer and wine drinkers alike. The tasting room is housed in an old blacksmith shop from the mid-1800s, and hosts frequent live music performances. Guests can also stay entertained with a collection of classic board games.

Technically within city boundaries, Fort Benjamin Harrison State Park is a scenic, 1,700-acre stretch of wilderness with hiking trails, picnic sites, and fishing access at Fall Creek. The site was used as a military training base throughout both World Wars, and retains many handsome brick buildings from the early 1900s — including an upscale restaurant in the old Officers’ Club.

Within Indianapolis, there are dozens of tasteful places to stay, ranging from those with highbrow art collections to the more relaxed, straightforward options. Most are within walking distance of the main attractions like Monument Circle, White River State Park, and the Indianapolis City Market, so for those who opt for a traditional downtown stay, you’ll have an action-packed vacation.

For a pampered experience in the heart of Monument Circle, Conrad Indianapolis is a luxury spa hotel with a special tier of “Collection Suites,” all designed around a specific piece of art in various genres (think: Pop, Modernism, and Surrealism). West Elm also has plans to introduce a stylish, design-driven hotel with the brands distinct Mid-century aesthetic.

Another pick for visually minded travelers is The Alexander: a stylish boutique hotel in downtown Indy with a robust art program (they even commissioned a U.K.-based graffiti artist to vandalize their parking garage). The on-site lounge, Plat 99, serves delightfully odd-sounding cocktails alongside charcuterie plates.

Further away from downtown, Hotel Broad Ripple offers 13 individually designed, rustic-chic rooms. From its perch on the White River, this property has a cozy lodge feel to it, and in the summer serves beer and wine on the patio.

For those who want to be closer to the convention center and are especially conscious about staying within the budget, several affordable hotels like the Sheraton Indianapolis City Center and Holiday Inn Indianapolis Downtown round out the bill.

In addition to hotels, there are several resources for choosing stylish (and affordable) homes located within the city and in its attractive suburbs, using sites like Airbnb and FlipKey. 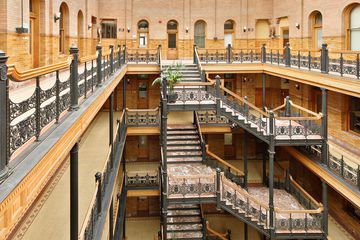 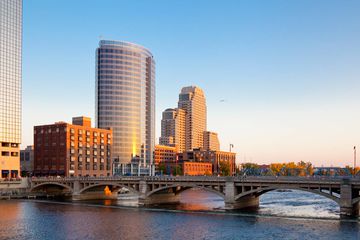 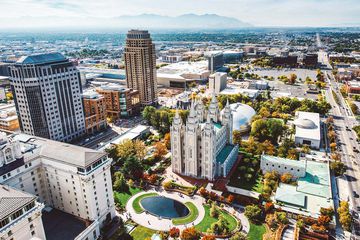