The North Shore of Massachusetts may have a lower profile than other parts of New England — but that, according to one travel writer, is the whole point.

Most summer visitors to coastal Massachusetts flock to Cape Cod, a quintessential maritime region that has lured politicians and celebrities for more than a century. But in high season, it's not unusual to wait in standstill traffic for an hour or more just to cross the Sagamore Bridge from the mainland. For a native New Englander like me, the easygoing alternative is Cape Ann (often called the "Other Cape") and the surrounding North Shore, which includes a dozen or so towns stretching from Boston to the New Hampshire border. Over the years, I've frequently escaped to the North Shore's boulder-strewn beaches and small harbors; here, my recipe for a perfect stay, which I road-tested one gorgeous July weekend.

I began in Gloucester, this country's oldest seaport, about an hour's drive north of Boston. In 1606, French explorer Samuel de Champlain arrived in what is now Gloucester Harbor, which he called "le beau port." English colonists followed, and by the early 19th century the area's fishing and shipbuilding industries were flourishing. The Cape Ann Museum (capeannmuseum.org) documents this maritime history and also houses an impressive collection by Luminist painters like Winslow Homer and Edward Hopper, who explored the effects of light on the coastal landscape. (The light is said to be uniquely ethereal because of the granite's reflective properties.)

One of the best views in Gloucester is from the recently renovated rooftop bar and pool at the 94-room Beauport Hotel (beauporthotel.com; doubles from $199), where I spent the night. After checking in, I ventured into town for lunch at the Seaport Grille (seaportgrillegloucester.com; entrées $16–$36), sampling a tequila-and-lemonade cocktail; a tangy, overstuffed lobster roll; and crispy onion rings with the pronounced flavor of hops.

That afternoon I strolled Wingaersheek Beach before boarding the 64-foot schooner Thomas E. Lannon (schooner.org; 90-minute trips from $33). We sailed past Hammond Castle — built between1926 and 1929 by inventor John Hays Hammond Jr. in the style of a medieval European fortress — and Eastern Point Lighthouse, which has guided ships through Gloucester Harbor's treacherous ledges for more than a century.

It was a short drive to the town of Ipswich and its historic Castle Hill on the Crane Estate (thetrustees.org). The 2,100-acre seaside property — which has several gardens, a Stuart-style mansion, and a tree-flanked lawn that slopes down to Ipswich Bay — has had many lives, but is most often associated with Chicago industrialist Richard T. Crane Jr., who purchased it in 1910. You can walk the trails to Steep Hill Beach and Crane Beach, both protected habitats for the threatened piping plover. Before long, I'd worked up an appetite, so I headed to Great Marsh Brewing Co. (thegreatmarsh.com; entrées $15–$28), in nearby Essex, for an excellent shrimp po'boy and hand-cut fries.

My hotel, the Emerson Inn (theemersoninn.com; doubles from $269), was built in 1871 on a bluff in Rockport that overlooks Sandy Bay. Staying at the recently restored 36-key property felt like a visit to the home of a wealthy, eccentric aunt — elegantly snug, complete with swishy bed linens and freshly baked cookies. Sometime before dawn, lightning scraped across the sky. Rain sheeted down over rolling waves and the wind whipped the inn's flag against its pole. I sat in bed, listening to the rushing and retreating of the surf.

Even at 10 a.m., Rockport's downtown was still waking up. I munched on a strawberry pastry from Helmut's Strudel (69 Bearskin Neck; 978-546-2824) and wandered the rain-washed streets, passing houses painted in shades of weathered gray, butter, apricot, and lilac. I watched, transfixed, as a bufflehead dove into the water, looking for food, near "Motif No. 1" — a charming red fishing shack said to be the building most painted by artists in the United States.

My final stop was Salem, the most misunderstood city on the North Shore — it's usually associated with the infamous witch trials in 1692, but today Salem is modern, cultured, and eclectic. One highlight is the Peabody Essex Museum (pem.org), which has a fantastic collection of Asian art, including Yin Yu Tang — a 200-year-old Chinese merchant's house that was disassembled into thousands of pieces, brought to Massachusetts, and painstakingly reconstructed on the property.

I decided to wait out another passing storm at Pentagram (pentagramsalem.com), which locals had told me was the best of the city's witchcraft shops. In a curtained booth, co-owner Leanne Marrama fanned trios of tarot cards over a marble tabletop. She related the cards, accurately, to changes in my career and a recent death in the family. She drew again and announced, "You have a special connection to the North Shore."

When the rain abated, I met my husband at the ferry wharf for a boat ride out to Bakers Island, four miles off the coast in Salem Sound. Much of the 60-acre island is privately owned, but visitors can take a day trip to the lighthouse station. They can also camp or, as we did, stay at the Assistant Keeper's House (bakersislandlight.org; from $950 for two nights for up to four people). We explored the walking trails, traversing rocky slopes and paths lined with bittersweet and brambles, and climbed to the top of the lighthouse, known as "Pa" Baker.

In the fading light, we arranged our dinner on a picnic table: olives, sesame noodles, truffled cheddar, and marinated feta from the Cheese Shop of Salem (thecheeseshopofsalem.com); Carignan-Grenache wine from Pamplemousse (pmousse.com); and chocolate-covered butter crunch from Harbor Sweets (harborsweets.com). Then, to the soundtrack of a clanging buoy bell, we devoured it all.

A version of this story first appeared in the July 2022 issue of Travel + Leisure under the headline Shore Thing. 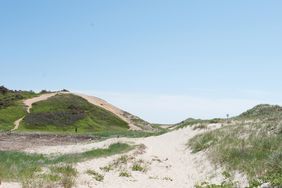 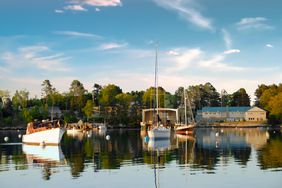 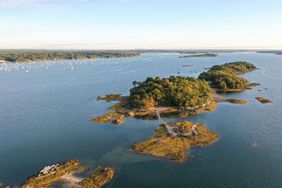