Every spring, Asheville, North Carolina's Biltmore estate showcases its seasonal colors on 8,000 acres in the Blue Ridge Mountains. This season, America's largest home will be decked out with nearly 72,000 tulips in its Walled Garden as part of the Biltmore Blooms springtime celebration from Apr. 1 through May 26, 2022.

The floral takeover of the estate — built by George Vanderbilt and opened in 1895 — begins with yellow buds from forsythia and daffodils before the tulips emerge. Later in the spring, azaleas also bloom, along with rhododendrons and mountain laurel.

The blooms set a stunning backdrop for the North Carolina property's other seasonal highlights, including the exhibit "Monet & Friends: Life, Light and Color," which opened last week and runs through July 10 at Biltmore's event center, Amherst at Deerpark. As part of its Legends of Art and Innovation exhibition series, the work of Claude Monet and other impressionist artists, including Pierre-Auguste Renoir, Paul Cézanne, and Edgar Degas, will be displayed in large-scale projections. Along with the immersive experience, two rare Monet paintings from Vanderbilt's own collection, "Strada Romana à Bordighera" and "Belle-Île, le chenal de Port-Goulphar," were restored and will be on display in the Biltmore House's Morning Salon.

This year also marks the 200th birthday of landscape architect Frederick Law Olmsted, best known for designing New York City's Central Park, and who also is behind the splendor of Biltmore's gardens and grounds. On Apr. 22, Olmsted's Biltmore: A Collection of Scenic Stops will open, to highlight his contributions, while a moveable feast will also be held on that date in his honor.

Also new this year will be extended evening tour hours for the Biltmore House from May 6 through July 8, as well as live music in the Walled Garden and on Biltmore House's Library Terrace.

For those looking for a more exclusive Biltmore stay, the Line House Cottages, two residences in a pastoral setting with easy access to hiking trails and the Antler Hill Village and Winery, have been added to the Cottages on Biltmore Estate. Along with the existing Dair Foreman's Cottage in the woodlands and the luxurious Market Gardener's Cottage, there are now four private residences to enjoy on the grounds. 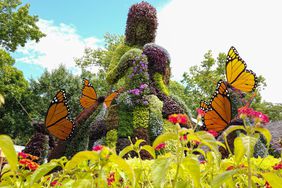