The test flight of the spacecraft, which could eventually take humans to Mars, will be livestreamed online.

With a massive 396-foot-tall, 30-foot-wide stainless steel body with fins, Starship looks as if it’s been plucked from the pages of a retro sci-fi comic book. But don’t be fooled by the retro-futuristic look — this is a highly advanced spacecraft.

Starship’s rocket, Super Heavy, will be the most powerful one ever created. Its Raptor engines will generate some 16 million pounds of thrust that will send crew and cargo to far-off places like the moon and Mars, or extra-heavy payloads into low-Earth orbit.

And, being that Starship is a SpaceX spacecraft, the entire system is designed to be reusable and therefore very cost-effective. It’s estimated that a Starship launch will cost $2 million once it’s flying regularly, down from an average $57 million for a Falcon 9 launch and an average $100 million for a United Launch Alliance Atlas V launch.

While Starship is nowhere near ready for operational missions yet, testing has begun at SpaceX’s rocket production and launch facility in Boca Chica, Texas, located near the Mexican border on the Gulf of Mexico. So far, there have been three test flights of Starship, the most recent maxing out at 500 feet in altitude.

This week, however, SpaceX plans to attempt its first high-altitude test flight, sending the prototype Starship Serial Number 8, or SN8, to an altitude of 41,000 feet (15 kilometers). The spacecraft will also attempt a landing flip maneuver, a technically challenging procedure that has never been performed by a rocket this large.

This test flight could happen as soon as today, and SpaceX is livestreaming it for the first time. The exact launch time has not been announced, however, so if you’re tuning in, you might be playing a bit of a waiting game. While you wait, check out the unofficial livestream from news site NASASpaceflight.com, where commentators entertain viewers with information about Starship and SpaceX throughout the day, answering questions in the live chat. The payoff, though, should be worth it. The test will likely provide quite a show — the odds that something could go spectacularly wrong are high (SpaceX CEO Elon Musk anticipates a 33% chance of success).

“With a test such as this, success is not measured by completion of specific objectives, but rather how much we can learn as a whole, which will inform and improve the probability of success in the future as SpaceX rapidly advances development of Starship,” SpaceX writes in the description of the test’s video feed.

And if everything goes right? Well, you’ll still get to witness a pretty impressive test flight of a brand-new rocket. 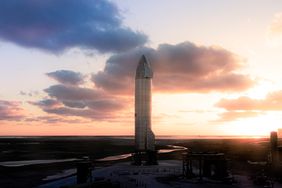