If you thought our planet was bad you should try moving to planet K2-141b.

Scientists have pinpointed what they say is one of the “most extreme planets” ever discovered on the edges of our solar system. How extreme, you ask? Well, its oceans are made of molten lava to start. Oh, and it also rains rocks and has supersonic winds.

“The study is the first to make predictions about weather conditions on K2-141b that can be detected from hundreds of light-years away with next-generation telescopes such as the James Webb Space Telescope,” Giang Nguyen, a PhD student at York University, and lead author of the study, said.

The authors shared, just like Earth’s water cycle causes water to evaporate and rise to the atmosphere to fall as rain again, “so too does the sodium, silicon monoxide, and silicon dioxide on K2-141b.” That means the mineral vapor evaporates and then falls again as rock “rain.”

While this may seem totally wild, it’s actually a process Earth may have gone through, too.

“All rocky planets­, including Earth, started off as molten worlds but then rapidly cooled and solidified. Lava planets give us a rare glimpse at this stage of planetary evolution,” Professor Nicolas Cowan, who oversaw the study, said.

Beyond the molten oceans and rocky rainfall, the authors also found that about two-thirds of the planet sits in perpetual daylight. This, the authors explained, is because of the planet’s proximity to its star, which keeps it gravitationally locked in place. And while one side sits in eternal sun, the other sits in total darkness, causing that side to have temperatures below -200 degrees Celsius.

“Our finding likely means that the atmosphere extends a little beyond the shore of the magma ocean, making it easier to spot with space telescopes,” Cowan said.

Next up, the scientists will test their predictions on the planet’s wild weather using more data from the Spitzer Space Telescope, which should give them an even more accurate look at its temperatures. For now, you can at least use this information as perspective that our planet isn’t too shabby. And perhaps use it as inspiration to do something nice for Mother Nature today. 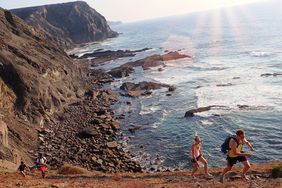