Here's everything you can see in the skies in September, including the Corn Moon, a SpaceX rocket launch, and more.

After the August rush of meteor showers and astronaut activity, September is comparatively a bit slower in terms of what’s going on in the skies. But that doesn’t mean it’s totally silent. During the first half the month, you’ll want to keep an eye out on celestial activities, while the last few days of September are scheduled to be busy on the spaceflight front. And use this downtime to rest up before October, which is going to have a packed calendar.

The month kicks off with a full moon on Sept. 2 — the Full Corn Moon, in the Native American tradition. As you might expect, the moon gets its name from the corn harvests that often happen in this month. September’s full moon is sometimes called the Harvest Moon, but this year, the Harvest Moon falls in October (the name goes to whichever full moon occurs closest to the autumnal equinox).

A planet reaches a point called opposition when it’s 180 degrees away from the sun in the sky, from the viewpoint of Earth. Essentially, the sun, the Earth, and the planet form a straight line during opposition. More practically speaking, opposition is the best time to view a planet, which will be the brightest it will get all year. Neptune’s opposition falls on Sept. 11, 2020, so make sure you have access to a telescope to get a good look at the eighth planet. Even with a small personal telescope, you should be able to see Neptune’s cool blue hue.

Lovers of sweater weather, leaf-peeping, and all things pumpkin spice — rejoice! Sept. 19 marks the astrological start of fall in the Northern Hemisphere and spring in the Southern Hemisphere. At precisely 9:31 a.m. EDT, the sun will cross what’s called the celestial equator, which is an imaginary circle that’s drawn out from the Earth’s equator, marking an equal day and night.

On Sept. 29, Northrop Grumman will launch a cargo resupply mission to the International Space Station from NASA’s facility on Wallops Island, Virginia, using a Cygnus spacecraft atop an Antares rocket. While there won’t be any astronauts on board, the launch will be a fun one to watch, as it’s scheduled to lift off at 10:26 p.m. EDT — night launches from Wallops are typically visible across the Mid-Atlantic region, and sometimes even into New York and New England. So, if the skies are clear, look up just after liftoff. If you’re not within viewing range, however, you will likely be able to catch a livestream of the launch through NASA’s channels.

Can’t watch the Northrop Grumman launch on the 29th? Don’t stress — your next chance to see a rocket launch is just one day later. SpaceX is scheduled to launch a GPS satellite for the U.S. Air Force from Cape Canaveral Air Force Station in Florida on a Falcon 9 rocket on Sept. 30. The launch window is from 8 p.m. to midnight, local time, so that makes two night launches in a row. Given Cape Canaveral’s more southerly position compared to Wallops Island, only viewers in the South will be able to see the launch IRL. Viewers farther away will have to tune in to SpaceX’s livestream, which does offer the benefit of watching the mission’s Falcon 9 booster land on a drone ship.

Note: Launches and landings are subject to schedule changes, and while this information was accurate at the time of publication, we advise checking for updates from spaceflight providers. 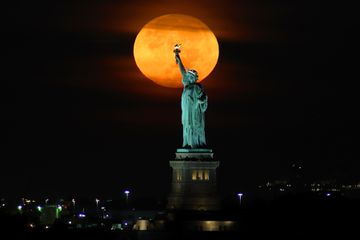