This charming coastal town is the best-kept secret in Washington state.

The Washington coast is ancient and wild. It's a place where elk saunter across sandy beaches, waves crash over rocks, and hiking trails wind through forests so thick you can barely see the sky. It is, in short, breathtaking. You might expect a place this beautiful to be overrun with visitors, but despite its undeniable allure, tourism has never taken off here the way it has on the rest of the Pacific Coast. The California and Oregon coastlines are dotted with boardwalks and charming small towns, but for most of recent memory, there was no equivalent of Cannon Beach or Carmel-by-the-Sea in Washington. This is finally changing with Seabrook.

Perched on a bluff above the ocean, Seabrook is a unique destination on the Washington coast — a quaint community with a town square full of sweet shops, boutiques, and eateries. Despite being founded in 2004, it's decidedly old-fashioned. It's the type of place where you park your car and get around by foot or bicycle, waving to people you pass by. There's a neighborly feel here that can't be replicated in towns where you drive from place to place — a connection to the people and things around you that can only be felt in the open air.

Seabrook feels a little like a secret, since many Washingtonians are unaware of its existence. Despite living in the Seattle area most of my life, I was one of those people. Once I learned there was a picture-perfect beach town on the Washington coast, though, I couldn't get there fast enough. I booked a two-bedroom home with my boyfriend and his parents, and we set off for the weekend. The drive from Seattle is just two and a half hours, and the trip takes you through small fishing and logging communities.

The Cottages and Town Square

Although there are a few hotels in the greater area, there are no properties in Seabrook itself. Instead, most visitors rent vacation cottages. We chose an impeccably decorated home with ocean views. The pictures online were gorgeous — and the reality only confirmed that. The views from here were so expansive that we stood in front of the windows with our mouths open like four people who'd never seen the ocean before. There was a path in front leading to the beach, but on our first night, we ordered takeout from the Mexican restaurant in town and soaked in the sunset through the window.

Everything in Seabrook is close. You can get almost anywhere in about 10 minutes, and that's assuming a leisurely pace, so we decided to go for a walk the next day. The town square is full of specialty shops, including an independent bookstore and wine shop, a spa, and restaurants. In the summer, there's also a courtyard full of food trucks. I'm a firm believer that dessert tastes better when you can hear the ocean, so I was sure to buy some ice cream and candy at the sweet shop.

On the way back to our cottage, we walked along sidewalks of crushed oyster shells through a few neighborhoods. Seabrook was modeled after Seaside, Florida, where "The Truman Show," starring Jim Carrey, was filmed. And, indeed, Seabrook is so picturesque that it does look like something out of a movie. The homes were built around public gathering spaces with fire pits — some with large lawns, others with bocce ball courts or gazebos. If you want solitude in Seabrook, you'll find it, but if you're seeking community, you won't have to go far to find that either.

There are two main paths leading down to the ocean, where you'll find wide stretches of beach for walking, beachcombing, and lounging. We were told that you can still occasionally find the old glass fishing floats washed up on the sand, and though we didn't find any, we had fun trying.

Biking is a big deal here. In addition to the fat tire bikes you'll spot on the beach, there are more than eight miles of interconnected trails through forests and ocean panoramas. And for families, the farm district has gardens, orchards, horses, and a playground with a zip line and basketball court.

We also passed by Buck's Northwest, where you can rent bicycles, take surf lessons, or hire adventure guides. According to their website, they offer guided razor clam digs, complete with equipment and licenses. Razor clams are a huge, meaty Pacific Northwest delicacy, but alas, digging season was closed during our visit.

Seabrook is only two hours from Olympic National Forest, one of the best hiking destinations in the country. Here, you'll find people from around the world heading out to climb mountains with their heavy, metal-framed backpacks, but there are also plenty of incredible day hikes and deep, green lakes for boating and water sports. If nothing else, visit Ruby Beach, which is hands down one of the most ruggedly beautiful beaches on the Pacific Coast. Bring your camera. The beach is famous for its rust-colored sand and rock formations springing dramatically from the water to the sky.

Less than a half-hour away, you'll find Ocean Shores, which lacks the pedestrian-friendly charm of Seabrook, but is nevertheless a popular destination due to the fact that it's home to the Quinault Beach Resort and Casino. It's also worth noting that it's legal to drive on the beach in Ocean Shores, so the experience is completely different than what you'll have in Seabrook. At sunset, it often feels like a tailgate party, with people eating pizza out of cardboard boxes on the roof of their cars while watching the streaks of color melt like wax across the sky.

If you're just visiting for a weekend, however, there's really no need to venture out. We took great pleasure in simply surrendering ourselves to a place where everything could be reached on foot. Before leaving, we took one more trip down to the beach, hopping across streams of water in the sand. The ocean seemed to go on forever, but unfortunately our time in Seabrook had come to an end.

This Coastal Road Trip Showcases Quaint Towns, Stunning Hikes, and the Best of Celtic Culture
The 50 Best Places to Travel in 2023 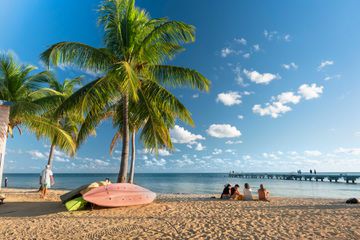 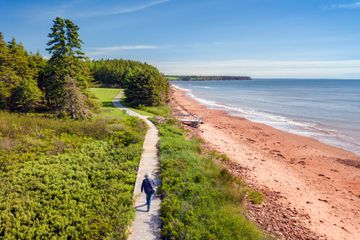