Could electric vehicles be the future of safaris in Africa?

If you've ever seen a cheetah stalk its prey, you know that even for the fastest animal on the plain, the hunt is an exercise in patience and silence. And if you're lucky enough to be the one stalking a big cat while on safari, you know that pursuit demands the same quiet stamina — until the noiselessness of the prowl is punctured by the diesel roar of your open-air Land Cruiser.

Enter the electric safari vehicle, a green innovation that could upend the Kenya safari experience — and help preserve the delicate ecosystems that draw some two million tourists to the country every year.

Electric safari cars are the newest offering at a small handful of camps across Kenya, and they promise to both protect the environment and enhance the experience by driving in near-total silence. As of early 2021, Nairobi-based company Opibus converted 10 Land Cruiser safari vehicles from diesel to electric.

"We deploy solar [power] and convert vehicles, so that the whole ecosystem creates an off-grid safari system that is independent of the surroundings," says Albin Wilson of Opibus. "Sustainability-wise, it's huge." Once Opibus converts a safari vehicle from diesel to electric, the car charges via a solar panel station. There's no need for the vehicles to burn fuel or make use of the diesel that is trucked into Kenya's nature conservancies and stored in underground tanks, where it threatens to seep out.

Converting existing vehicles instead of building new electric ones from scratch, Wilson says, is also a cost-saver in the long run. "You can use your current fleet and just improve it, and increase the life span of existing vehicles," he says. "You don't have to put anything into landfills, which makes a lot more sense financially and sustainability-wise."

It's also just a better way to safari.

To continue our cat theme, if a typical safari vehicle roars and an Italian sports car purrs, then an electric safari car glides. As the 4x4 rolls across the Maasai Mara's open expanses, all you hear is the wish-swish of grass against the vehicle's metal sides while you slither in silence up to a cheetah ripping into an antelope carcass. The car is so quiet that the cat doesn't even flinch.

"It's super cool, going closer to game, with no noise, no emissions — it's just amazing," says William Partois Ole Santian, the manager and co-owner of Emboo River Camp in the Maasai Mara, the only Mara safari camp that has so far gone all-electric with its fleet. "This is exactly what the Mara needs now: People who are eco-minded and sensitive about their footprints in the wild."

Partois Ole Santian, who was born and raised in the Mara, grew up watching tourism at once extend an economic lifeline and also threaten long-term destruction of the very land and animals so many foreigners flock to see. "There are more camps now than before," he says. "There's a lot of change, more land use, more human activities within the Mara."

He started out as a night guard escorting tourists to their tents after sundown, tracing his flashlight through the dark for an unwelcome hippo or other potential hazard. He moved up to room steward, later worked in the kitchen, and after going through safari guiding school, he became a spotter and then a certified guide.

When he opened his own camp with two partners, he knew he wanted to do things differently, starting with nixing the hyper-focus on Big Five animals (lions, buffaloes, leopards, rhinoceroses, and elephants) that safarigoers are typically encouraged seek out. Big Five is a term that was initially set by hunters, and a relic of colonialism; Partois Ole Santian replaced it with Big 20, drawing in some of the Mara's most stunning, but less wall-mountable creatures, from the painted wolf to the lilac-breasted roller. Partois Ole Santian and his partners also aimed to have zero single-use products at the camp and to make everything eco-friendly, from the detergents to the scouring pads used to wash dishes.

And they wanted to do something no other camp had done before: an all-electric fleet, powered up by the sun.

"Now, we're showcasing this within my community here. People are interested and asking questions about how this can be done," Partois Ole Santian says.

Indeed, nearly every time Emboo River's electric safari vehicles stop alongside traditional diesel ones, curious tourists and professional photographers poke their heads out to confirm what they're seeing (and not hearing). Some snap photos of the Land Cruiser's side panel, where the Emboo camp logo is printed in orange along with "1st Electric Safari Vehicle in the Maasai Mara." Driving across the plain, breathing in clean air, and hearing the quiet cut only with birds chirping and the crush of yellowed grass under elephant feet is simply an unparalleled experience, and one you don't experience in a rumbling vehicle leaving diesel fumes in its trail.

Emboo is a leader, but it's no longer alone. Other camps in the Maasai Mara are following suit and slowly converting their old cars. Lewa Wilderness in northern Kenya's Lewa Wildlife Conservancy was the first to add an electric vehicle to its fleet, and continues to take visitors on all-electric safaris.

And Opibus isn't limiting itself to the safari set; the company is also in the process of rolling out electric motorbikes, a popular form of transport in cities, and electric matatus, the buses that dominate public transport across Kenya. All the building and retrofitting happens locally, bringing jobs to Nairobi. (The employees are 85% Kenyan.)

For now, the all-electric fleet sets Emboo apart from most other Mara camps. But Partois Ole Santian hopes that will change.

"Being local and coming from here, it's so great to be where we are now — to show that this can be done," he says. "The Mara has a light at the end of the tunnel. One day, we'll go back to how it was 50 or 60 years ago." 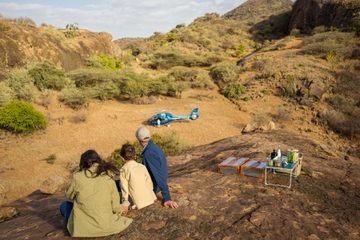 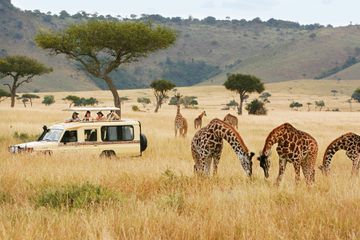 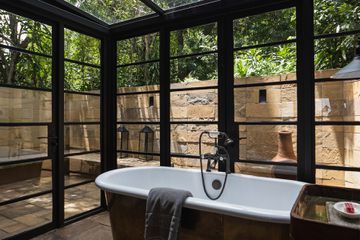 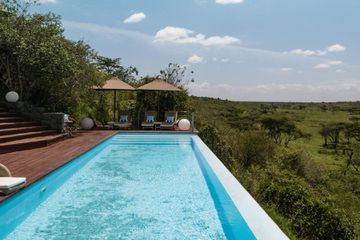 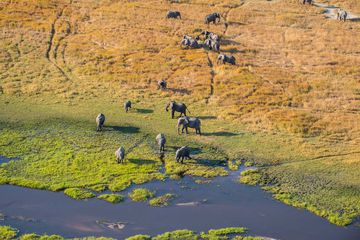 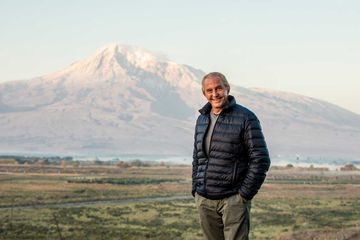 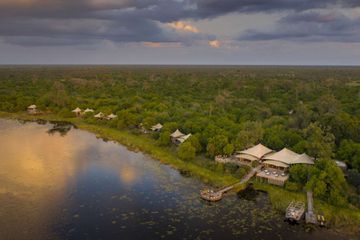