One route to rule them all.

In the early 1900s, national parks were largely playgrounds for the wealthy. Visitation often numbered in the tens of thousands, with itineraries fulfilled via expensive rail tickets, stagecoach tours, and horseback rides.

When automobiles joined the scene, the average American — fresh from their own pandemic — had a chance to hit the open road, an opportunity to see the country like never before. But in this case, the “open road” was a muddy path or dusty trail, if it existed at all. And our national parks were still wild expanses barely fit for mules.

So, in 1920, 12 Americans — representing groups like the National Park-to-Park Highway Association and AAA — set out from Denver, Colorado, for a 5,600-mile road trip, lassoing 12 national parks into one massive loop. Their goal? To draw publicity and tourism to the country’s public lands and to push for driveable roads that connect them.

From Denver, the first stop is Rocky Mountain National Park. Today’s visitors can take Trail Ridge Road across its alpine expanse; in 1920, the gang’s only option was Old Fall River Road, the park’s original auto route at nearly 12,000 feet. One hundred years later, it’s still an 11-mile stretch of dirt, open from July to September.

The route then heads north up Interstate 25 through Cheyenne, Wyoming, bending eastward on Highway 14 through Cody and to Yellowstone National Park. To follow in the group’s footsteps, stay at the Lake Yellowstone Hotel, and give the nation’s first national park a solid four days.

Then, it’s off on the Yellowstone-Glacier Bee Line Highway through White Sulphur Springs, Great Falls, Browning, and to Glacier National Park in Montana. In 1920, the group could count 60 glaciers and zero real roads; today, there are 25 glaciers, and the Going-to-the-Sun Road is one of the country’s most scenic drives.

Heading west on Montana’s Highway 2, from Kalispell toward Libby and the Idaho border, national forests abound in every direction into Spokane, Washington. Highway 2 runs out in Seattle, where the route turns south for Mount Rainier National Park. Be sure to visit Paradise on the south slope of the mountain — and be grateful you’re not traveling via mule team. It’s a straight shot south through Olympia, Portland, and Eugene, ultimately reaching Crater Lake National Park in Oregon. Little has changed since 1920: The group stayed at the still-picturesque Crater Lake Lodge and completed the 33-mile Rim Drive, built just a year prior to their trip.

From here, it’s California or bust, aiming for Redding and Lassen Volcanic National Park. Lassen has all four types of volcanoes, though the group never saw them, as the park had no roads in 1920. Some 300 miles further south, the granite vistas of Yosemite National Park take over, followed by a vertical wilderness of giants at Sequoia and Kings Canyon National Parks (the latter was known as General Grant National Park until 1940).

Once in Los Angeles, the route shoots eastward on the National Old Trails Road, a.k.a. Route 66. From Barstow, take a detour up to Zion National Park — a 500-mile ask the group skipped to make time — and then head back south through Kingman, Williams, and to Grand Canyon National Park in Arizona. The group spent three days at the now-historic El Tovar Hotel before departing for what’s now Petrified Forest National Park, Gallup, Durango, and Mesa Verde National Park, an 800-year-old ruin in Colorado and the group’s last stop on their whirlwind tour. They drove the Knife Edge Trail — you, however, can walk it. From Mesa Verde, it’s on to Salida and up Colorado’s spine via Pueblo, Colorado Springs, and finally, back to Denver. To sum up the trip, Stephen Mather — the NPS’ first director and mastermind behind the idea — put it best: “Each park will be found to be highly individual. The whole will be a revelation.” 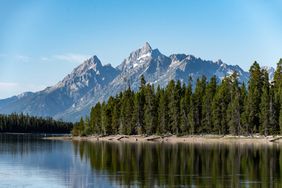 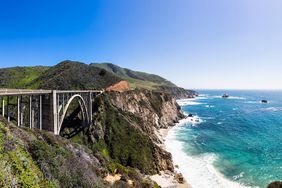