2017 year marks a significant milestone for one of North America’s most prominent highway systems: The Alaska Highway, a historic corridor beginning at Mile 0 in British Columbia and snaking through the Yukon Territory to Delta Junction in Alaska, is celebrating its 75th anniversary. Completed on Oct. 25, 1942 — with the official ribbon cutting commencing on November 20 that year — the Alaska Highway is also known as the Alaska-Canadian or Alcan Highway.

Begin at Dawson Creek, also known as Mile 0, the official origin point of the legendary Alaska Highway. Get a photo at the destination’s famed Mile Post – locals say it’s a good luck tradition. While you’re there, brush up on your history at the Alaska Highway House and stop by the Dawson Creek Visitor Center, located in the old train station.

From Dawson Creek, drive until you hit mile marker 21. Here, you’ll find the Kiskatinaw River Bridge. The very first of its kind to be built in Canada, this curved timber bridge began construction in 1942 and served as a pioneer military road leading to Big Delta, Alaska. As the only one still functioning today, the 534-foot bridge is a perfect stop to stretch your legs and soak in views of the rolling forest and raging river below.

Continue your journey to the Fort Nelson Heritage Museum, which started with an antique car collection, echoed by the museum’s transportation theme. Originally curated by local legend Marl Brown, the museum features antique hand tools, mineral samples, and monuments dedicated to the men and women who helped bring the Alaska Highway to life.

Approximately three hours from Fort Nelson is Muncho Lake, the perfect respite for take a scenic hike to stretch your legs. Stop at Double G Service to snack on homemade baked goods and listen to colorful tales recounted by gregarious employees, and for a little European flair, head to the Northern Rockies Lodge. If you’re feeling daring, hire a local bush pilot for a floatplane adventure through the Rocky Mountains.

Next, stop at the Liard River Hot Springs, a must-visit site along the Alaska Highway. Summer is the most popular season to visit, but the springs are open to bathers year-round. Keep a look out for the area’s 14 species of orchids and wildlife like moose, bison, and bears. Don’t forget to bring snacks, bug spray, and cash to cover the park entrance fee.

As you enter Yukon Territory, don’t miss the chance to represent your roots by taking part in the time-honored tradition known as Sign Post Forest. The ritual originates to the earliest days of the highway’s construction after a homesick American soldier posted his hometown sign of Danville, Illinois. Today, the forest boasts an estimated 72,000 signs, all from travelers journeying along the highway. Don’t worry if you arrive with no sign post of your own, as you can make one at the Yukon Visitor Information Center to officially leave your mark.

Make an educational pit stop at the Yukon Beringia Interpretive Centre for a glimpse into the region’s prehistoric past. Here, explore a fascinating exhibit dedicated to Beringia, the massive land bridge that once stretched from Yukon to Siberia. Learn about the first North American peoples who migrated from Asia more than 15,000 years ago and the wildlife that used to roam the land, including the woolly mammoth, mastodon, and American scimitar cat.

As you continue to follow the winding highway through Yukon, you will eventually reach the Continental Divide of the Americas. Starting at Cape Prince of Wales, Alaska, the Divide crosses into Yukon before zigzagging south through the United States, Central America, and ultimately ending in Patagonia. The ridgeline separates the two largest river drainage systems in North America and is clearly marked with dedicated signage. So be sure to pull over, stretch your legs, and snap a souvenir photo before continuing your journey.

Lovers of the great outdoors will appreciate the striking beauty of Kluane National Park and Reserve. Declared a UNESCO World Heritage Site in 1979, the park is home to 17 of the 20 highest peaks in all of Canada. Sweeping vistas reveal towering mountain ranges, glaciers, and icefields in the distance. Thrill seekers will be ecstatic with the assortment of activities offered onsite, which includes hiking, mountain climbing, boating, cross country skiing, backcountry camping and more.

The St. Elias Mountains comprise the highest coastal mountain range in the world, with Mount Logan claiming the top spot at 19,850 feet (second only to Denali in Alaska). Those interested in climbing Canada’s highest peak can do so, but not without first obtaining a mountaineering license at least 90 days prior. We recommend stepping around the red tape by booking a flightseeing tour for the best views of the ice fields from above.

Technically, this stop is mandatory, but it deserves a place on the list nonetheless. The U.S. Customs and Border Protection station will be found at Milepost 1221 and officially marks your entry onto American soil. Here, take a photo to mark your entrance into Alaska.

Bird enthusiasts will delight in the dynamic landscape of the Tetlin National Wildlife Refuge, an area in the upper Tanana River valley. Made up of expansive forests, wetlands, tundra, lakes, and glacial rivers, the refuge is bordered by the snow-capped mountains of the Alaska Range. It’s a major route for birds migrating to and from Canada, including geese, ducks, swans, cranes, and various songbirds. The refuge is dotted with mammals such as sheep, moose, and caribou herds.

Nicknamed the “Sled Dog Capital of Alaska,” the town of Tok is home to Alaska’s unofficial welcoming committee. At less than 100 miles from the Canadian border, it’s long been considered a haven for travelers since it was established in 1942 (thanks to the construction of the highway). The visitor center is easy to spot, considering it’s a 7,000-square-foot log cabin.

After gathering intel from the Mainstreet Visitor’s Center, take a short drive to Mukluk Land – a whimsical, one-of-a-kind theme park that can’t be missed. Originally a junkyard, the tourist attraction provides hours of entertainment with games like skee-ball, whack-a-mole, and an 18-hole mini golf course. They also specialize in peculiar collections, like rusted snowmobiles and a log cabin filled with hundreds of dolls. While you’re there, take a picture next to the world’s largest mukluk, a soft boot typically made of reindeer or seal skin, traditionally worn by Alaskan natives.

Last but not least, stop at Delta Junction, the official end of the Alaska Highway. From this point, the Richardson Highway takes over, bringing fleets of passengers to Fairbanks. There’s plenty to do here, but don’t miss Delta Meat & Sausage Co., where you can find free samples of their signature buffalo and reindeer sausage. And as reward for completing this epic road trip, stop by the Smiling Moose gift shop to pick up a celebratory souvenir. 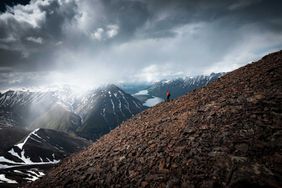