This Italian Region Is a Bucket-list Destination for Food, Wine, and Postcard-worthy Ocean Views

This four-day route hits all the highlights, but if you want to take it slow, allow for multiple nights at each stop.

Follow the winding roads of the Puglian coastline—the heel of Italy's boot—to hidden sea caves, clifftop towns, and farmhouse masserie. This four-day route is an ideal addition to a more extensive Italian itinerary, or stay multiple nights at each stop for a stand-alone trip with plenty of time to explore this serene corner of the country.

After flying into Bari, follow SS-16 along the Adriatic Sea to Polignano a Mare—its limestone cliffs and whitewashed houses put the region on the proverbial map. Start your trip on a celebratory note with lunch at the elegant Osteria di Chichibio, where freshly caught seafood is prepared with reverence. Then drive south to Ostuni, a hilltop maze of a city whose white houses would look right at home in the Cyclades. The moody, grotto-like Riccardo Caffè is a fitting spot for a drink after seeing the cave paintings of Santa Maria di Agnano. Finish your day in Lecce, a city of Baroque sandstone architecture, where you'll stay at 17th-century masseria La Fiermontina. Its 18 rooms and suites have vaulted ceilings as well as patios that look out on the olive-tree-lined courtyard pool. Tormaresca Vino e Cucina is run by heavy-hitting vintners who serve wines made from native varietals alongside local dishes like frittura mista di mare (mixed fried seafood).

Wake early to catch the morning sunlight on Lecce's Baroque Basilica di Santa Croce and order an iced espresso at Caffè Alvino. Don your swimsuit for a dip at the Grotta della Poesia, a nearby swimming hole that inspired myths of nymphs and sea goddesses, followed by a visit to the white-sand beach in Torre dell'Orso to see Le Due Sorelle, the two sisters, twin rock formations jutting out of the sea. A stop at L'Altro Baffo, in Otranto, for mussels with bread crumbs and pecorino is a must—as is a stroll through the city's medieval heart. Further south, the Punta Palascia lighthouse sits at the end of a wildflower-strewn path at Italy's easternmost point, where the Adriatic Sea meets the Ionian. Spend the night in Gagliano del Capo at Palazzo Daniele, where the minimalist design lets the contemporary artwork and restored 19th-century frescoes shine.

Round the heel of the boot to Gallipoli, a port city whose old town is situated on an island connected to the mainland by a bridge. Walk the town's cobblestone streets and snag one of the papier-mâché figurines the area is famous for, or break for a bowl of zuppa di pesce alla Gallipolina (fish soup). In the afternoon, wade into the Gulf of Taranto, explore the lively fish markets of Porto Cesareo, or spend a few euros on a boat ride to nearby island beaches. End the day in rural Crispiano, where the Masseria Amastuola Wine Resort is surrounded by vineyards, farms, and centuries-old olive groves.

Related: 10 Destinations in Italy Where Italians Love to Travel, According to a Local

Head north for an afternoon in Alberobello, a UNESCO site known for its 1,500 trulli, conical prehistoric limestone huts that now house restaurants, bars, shops, and private homes. Access Italy leads walking tours that reveal the history of these fairytale structures—and let you taste local specialities at some of the eateries inside them. In Savelletri, check into Borgo Egnazia, a luxury resort set in a dreamy recreation of a traditional Italian village. With six restaurants, three bars, a golf course, and private beaches, it's the perfect place to linger for a few days before driving back to Bari. 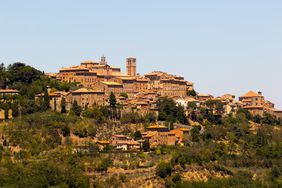