Social distancing or self-quarantining for weeks, possibly even months, will not be easy. Luckily, there are plenty of digital activities to keep you entertained while you're cooped up. Travel + Leisure has you covered, offering ways to stream Broadway shows and tour online museum exhibits — but what if you want something a little more interactive?

These days, there is no shortage of online platforms and games that allow us to wander through a digitized world. From immersive Google Earth-based puzzles to highly realistic simulations of popular tourist destinations, read on for six activities that let you explore the globe from the comfort of your own home.

This popular browser game drops players at a random location via Google Street View. You have one task: to identify where you are in the world based only on visual clues around you. It's not easy — license plates and faces are blurred, though signs are not. Your travel, cultural, and linguistic knowledge will be put to the test; make your guess by dropping a pin on the world map, and your true coordinates will be revealed. Players receive points based on the number of miles between their guess and the correct answer. Geoguessr will introduce you to unfamiliar places — a remote village in the Philippines, a bustling city in Romania — and navigating snapshots of daily life there can be riveting.

If you want to increase the challenge, there is an excellent way to level up. On the surface, MapCrunch is just an exploration tool — a way to teleport to a random location in Google Street View. But the platform has inspired a beloved internet challenge, known colloquially as the airport game. The premise: you've woken up on the side of the road in an unfamiliar country, and are trying to return home. First, make sure to check "stealth" mode in the settings — this prevents MapCrunch from giving any spoilers — and then use the arrow buttons to navigate your way to an airport. This game notoriously requires extreme patience and dedication, especially since you might be hundreds of miles away from the nearest airport — but it's gratifying even if you don't achieve the satisfaction of actually winning.

"Marvel's Spider-Man" made waves when it was released in 2018. In this open world single-player game, rated T for teen, you swing across Manhattan while attempting to stop a superhuman crime lord from taking over the city — and this virtual Manhattan is something to behold. The huge open map is filled with gritty details, and while not fully true to life, is so accurate that you'll immediately see the distinctive personalities of each neighborhood — the Village, Chinatown, even Governors Island. A must: scale the Empire State Building just before sunset, and bask in the beauty of a virtual New York City awash with golden light.

There are nearly a dozen games in the Microsoft Flight Simulator franchise, all of which follow the same structure: you create a flight plan and take off, soaring over landscapes and man-made structures across the planet. The latest title, "Microsoft Flight Simulator X: Steam Edition," was released in 2014. Choose from a wide rand of aircraft — from jumbo jets to helicopters — and travel between more than 24,000 different airports. There are also in-game challenges, including simulated search and rescue missions. This game doesn't just replicate the mathematical and procedural reality of flying — it's also a mesmerizing experience. The newest version of the game will be released later this year.

The main narrative of this critically acclaimed video game, recommended for ages 18 and up, follows an undercover police officer in his quest to infiltrate a notorious crime syndicate. But a player may also choose to roam freely in the world of the game — a world that is a nearly complete, though not entirely accurate, simulacrum of Hong Kong. In addition to the events of the storyline, the city becomes a living playground for karaoke, mahjong, and street food. "Sleeping Dogs" has been praised for capturing the essence of Hong Kong's disparate neighborhoods: Kennedy Town has clean, shiny buildings lined with palm trees, while North Point is full of narrow back alleys and dripping air-conditioning units. Pause your gameplay and wander to see how every gorgeous detail — from phone boxes to street signs — captures the city's cultural milieu.

This is not exactly a game — but it is great fun. Online since 2005, Virtual Globetrotting uses global satellite imagery to curate aerial and street view shots of notable sites and oddities around the world: unique landscapes, tourist destinations, unusual buildings, and more. There are hundreds of categories to browse, like a wide collection of corn mazes that includes one shaped like Oprah's face. Other popular collections include Ancient Structures, Roadside Attractions, and of course, Kardashian Houses. 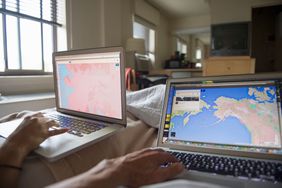