The bright yellow shade of a single sunflower can already be a mood booster, but imagine the petals blanketing endless fields — and it's a recipe for pure joy. That's exactly the case in North Dakota right now, which produces nearly 762 billion pounds of sunflowers (seeds in shell) a year, as the plants tend to reach peak bloom in August.

"Perched atop strong stalks and shining bright yellow toward the rising sun, the heads appear as millions of individual suns heralding the start of another day in North Dakota," reads the state tourism board's website. "Perhaps they play a role in North Dakota's high ranking among the happiest states in the nation. After all, you can't help but smile when you come upon the large fields scattered throughout the state."

In June 2022's plantings report by the National Sunflower Association, 735,000 acres of the variety were planted — about 44 percent of the sunflower population in the U.S. — in the Peace Garden State.

To find the best places for sunflower spotting, North Dakota Tourism Division has a map tracking 20 areas in bloom across the state. The locations include the Mapleton area near Fargo, a cluster around Bismark, and a large concentration around Route 8 in the southwestern part of the state.

Each is listed with GPS coordinates and directions, and weekly updates showing what percentage of the flowers — which each stand an average of five to six feet tall — are in bloom. The tourism board cautions that some sites include privately owned land, and spectators may not visit those areas without landowners' permission.

The yellow petals aren't the only ones in full bloom this time of year. Also showing their hues are the wild blue flax and green soybean vines. The canola buds also help the sunflowers double down on their shades of yellow, truly making it the most colorful time of year to visit North Dakota. 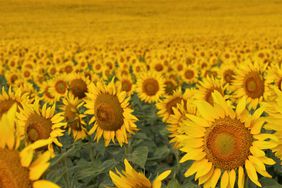 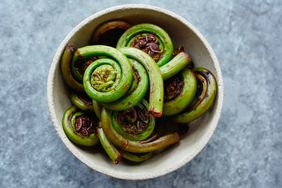 Where to Find (and Eat) Spring’s Best Wild Edible Plants Around the U.S.