3 Ultra-adventurous Ideas for Your Next Trip, Whenever That Might Be

No matter the niche passion, the ultra-intrepid can now have pulse-quickening tours tailor-made to their interests.

Adventurers have long had their choice of hiking routes, epic cycling itineraries, and paddling excursions. But now, travel companies are going one step further, creating wild experiences that appeal to the truly hardcore — and those that want to join their ranks.

Founded by a former expedition leader for Mahindra, one of India’s biggest automakers, Nomadic Road runs four-by-four treks that push Land Cruisers and other souped-up SUVs to their limits in the jungles of Laos, on the ice roads of Siberia’s Lake Baikal, and around the Mongolian steppes. Expeditions of a week or more include off-roading and technical driving — negotiating rock fields, fording rivers — but leave enough time for swapping stories over beers at the end of each day. Trips from $6,000.

Like a cross between a surfboard and Jet Ski, the battery-powered water toys known as jetboards let you ride water without the need for waves — and without the deafening rumble of a gas engine. Manufacturer Radinn, which has built jetboards since 2013, also organizes trips. It’s taken pro soccer players, adventure athletes, and regular folks to test-drive its gear in the fjords of Norway; off the coast of Zadar, Croatia; and along the canals of Amsterdam. Boards from $6,550.

Cultivate your inner Bear Grylls or Creek Stewart with tours that deliberately take you into the wilderness — and leave you there. Operator Black Tomato is best known for luxury trips, but its Get Lost program will drop you on the edge of the Sahara or above the Arctic Circle with a handful of supplies (survival gear, a machete, a satellite phone) and basic directions to a pickup point. The rest is up to you — though a support team is always nearby in case of a real emergency. Four-day trips from $20,000.

A version of this story first appeared in the July 2020 issue of Travel + Leisure under the headline There’s a Trip for That. 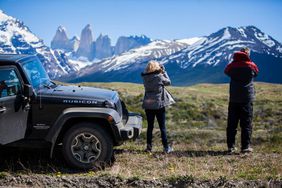