There are lots of different tours of New York City you can take, but only one will steer you around the city in a vintage car.

According to AM New York, a new tour company called Nowaday, in New York City, will take you around in a restored, vintage car. The company has 12 cars total, including a 1928 Ford Model, a 1932 Chrysler Imperial, and a 1931 Chevrolet Series AE.

"It's a head-turner every time we go out," said Nowaday co-founder Jaime Getto to AM New York.

Getto created the company with Heather Stupi after discovering that typical New York bus tours leave a lot to be desired. At the moment, the hour-long tour route only loops around midtown, passing by many famous landmarks as passengers ride between Central Park South, Carnegie Hall, Grand Central Station, and the Flatiron Building, according to AM New York

"People really only see these cars on a movie shoot or at a car show. People say they feel like celebrities when they take a ride," Stupi said to AM New York. "It feels like it belongs in New York City."

While the make and models of these cars look vintage, they've all bee restored to give passengers all the modern comforts, including a Spotify playlist of electro swing/house music that plays during the ride.

In addition, all drivers are trained experts in New York City history. They also dress up in vintage 1920s garb and speak in character during the ride. Not only are these guides excellent actors and drivers, but they are also chock-full of interesting knowledge that tourists and locals alike can appreciate.

"Our mission is to tell the story of every city we're in — New Yorkers who take the tour, even lifetime New Yorkers, get schooled in the history of the city," Getto said to AM New York. "We're taking the content very seriously."

Eventually, the company hopes to expand to other neighborhoods around the city. A downtown tour is expected to begin in December. In addition, the co-founders have plans to expand to other cities in the U.S., including Los Angeles, which will feature cars from the 1950s and 1960s.

More information about taking a ride in one of these classic cars can be found on the Nowaday website. 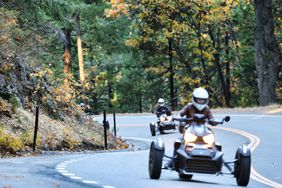