Texas Is Having Its Most Spectacular Bluebonnet Bloom in a Decade

This year’s Texas Bluebonnet & Wildflower Report predicted “roadsides in bloom much earlier than normal and much earlier than fields.” The “bloom-line” was predicted to reach San Antonio (roughly the same latitude as Big Bend) by mid-March or earlier.

Typically, the blooms last for about six weeks, from March until mid-April, with the peak coming in early April. This year, “blooms were first spotted in mid-February and are expected to last until the first week of April,” Hannah Atteberry from Travel Texas told CNN.

According to Texas Hill Country, “This record-setting bloom should last for another two to three weeks, so plan your trip to the Texas Big Bend soon.”

Big Bend’s version of the bluebonnet is not that typically found around Texas. This varietal is known as the Chisos Bluebonnet and is capable of reaching heights up to four feet. These blooms typically arrive a few weeks earlier than other bluebonnets.

The earlier blooms are due in part to heavy rainfall in the first part of this year. But this year’s blooms are also thriving due to warming temperatures coming earlier in the year, more sunshine, and conducive topography.

Last month, some Texans were predicting larger-than-normal blooms. The last particularly spectacular bloom to hit Texas Hill Country was back in 2010, according to locals. 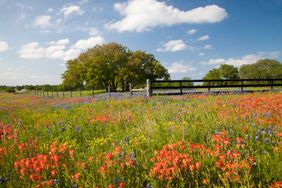