Ready for an exciting outdoor adventure?

Las Vegas is located in the middle of the desert, but those who skip this part are only getting half the story. Consider: a 30-minute drive from the Strip could land you in the middle of a red rock jungle, at 2,000-year-old petroglyphs, or under a waterfall in a remote canyon.

"Las Vegas is a great starting point for outdoor adventures," says Rachel Bergren, executive director of Get Outdoors Nevada (GOV). "We're easy to get to, and we have access to a lot of national public lands." Bergren is referring to five natural sites that surround the city, comprising millions of acres of unparalleled recreation area.

For the last 20 years, GOV has invited thousands of locals and visitors to utilize the stunning array of wilderness near Vegas, but there's still work to be done. "Most people don't think of Las Vegas as an outdoor recreation destination. But it's important to remember that most of this state is federal land, which means it's publicly accessible."

From hiking through otherworldly landscapes to driving through a century-old ghost town, read on for the best national monuments and parks near Vegas.

Nevada's oldest and largest state park is also its most striking. Established in 1935, Valley of Fire is an otherworldly landscape of petrified trees, 2,000-year-old petroglyphs, and trails that cut through some of the strangest, most colorful outcrops you've ever seen. There are quite a few paths to choose from, and nearly all lead to jaw-dropping natural rock formations, like Elephant Rock (aptly named for its lengthy, trunk-like protrusion), or the warped and wrinkled Beehives.

Located an hour northeast of Vegas, Valley of Fire is a convenient stopping point on the way to Zion National Park. (It's also popular with movie buffs, as classics like "Total Recall," "Casino," and "Austin Powers" were all filmed here.) If you're not in the mood to hike, stick to the scenic driving loop, which provides an excellent overview of the park's many natural attractions.

This 300,000-acre site is sacred to the Moapa Band of Paiute Indians, as well as the Las Vegas Paiute Tribe, and when you witness the incredible array of petroglyphs here, you'll understand why. Evidence of human dwellings date back more than 12,000 years, and the vivid rock paintings — in particular, a site called Newspaper Rock — offer a unique glimpse into what life might have been like for Nevada's earliest inhabitants.

Beware: The road that passes through Gold Butte is unpaved, and as a result, you'll need a high-clearance, four-wheel drive vehicle to tackle the rough terrain. (Make sure to bring two spare tires, as flats are a common occurrence.)

Once you've sorted your transportation, buckle up for a wild ride. The 62-mile, five-hour loop winds through one of the most remote stretches of southern Nevada. Highlights include a 110-foot-deep sinkhole nicknamed Devil's Throat, an abandoned mining town from the early 1900s, and Whitney Pockets, a series of multicolored caves formed from fossilized sand dunes dating back to the Jurassic era.

Standing inside Sloan Canyon, you'll wonder how it's possible that such a rugged, remote landscape can exist so close to the Strip. Surrounded by tall, jagged peaks, this 48,438-acre preserve is easy to reach from Vegas (a 30-minute drive) and offers a wonderful reprieve from the city's hustle and bustle.

There are no actual roads inside Sloan Canyon National Conservation Area, so plan on parking at the visitor center at Nawghaw Poa Road and hiking out from there. The route can be challenging in some parts, though the reward — a petroglyph gallery filled with more than 300 rock art panels, not to mention wildlife like jackrabbits, desert tortoise, lizards, and roadrunners — is worth the trek.

It's no surprise that this sprawling, 200,000-acre backcountry is one of the most popular national park sites in Nevada. An easy, 13-mile driving loop connects visitors to more than two dozen marked trails, with epic views waiting at every turn. In certain places like Ice Box Canyon or the Children's Discovery Trail, you might even stumble upon a hidden waterfall or two.

Red Rock is also a popular climbing destination, and at Calico Basin (located just outside the park's entrance), you can witness skilled climbers scrambling up the brightly colored cliffs. The 1.5-mile, beginner-friendly Calico Basin Trail passes by a trio of natural springs that feed a grove of picturesque cottonwood, ash, oak, and honey mesquite trees; there's even a lush grassland that makes it quite the romantic picnic spot.

In the 1960s, a major archaeological dig at Tule Springs unearthed a treasure trove of Ice Age fossils, earning a full-length spread in National Geographic and prompting locals to start petitioning for the area to be federally protected. Their efforts paid off in 2014, when Tule Springs Fossil Beds was officially declared a national monument, under President Obama's administration.

Being relatively new, this national monument lacks a proper visitor center and defined trails. But don't let that deter you from visiting. Head to one of three interpretive kiosks (located at the intersections of North Durango Drive and Moccasin Road; Aliante Parkway and Moonlight Falls Avenue; and off the exit from U.S. 95 at Corn Creek Road) to learn about the magnificent animals that once roamed these plains, including the Columbian mammoth, saber-tooth cat, and camelops. 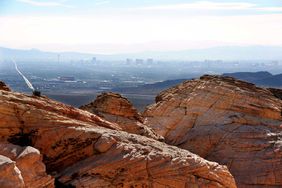 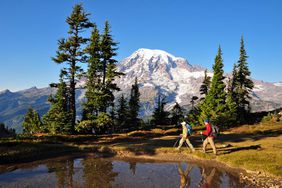 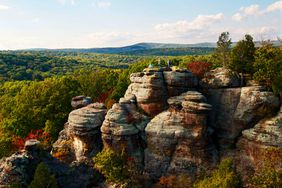 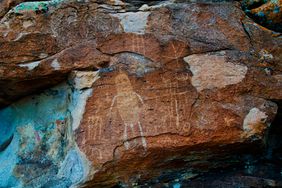 Hike This Free Nevada Trail to See Petroglyphs From More Than 3,000 Years Ago

The Best Views in America