When you imagine a desert, visions of Morocco or Egypt probably come to mind. Or maybe the regions surrounding Dubai and the great American West.

About one-fifth of the world's land area is composed of these arid regions. Some are barren and uninhabited by humans (hey there, Antarctica!) but many are accessible to those who want to witness these dry, impressive stretches of landscape.

From Australia to China to Canada, you will be amazed by how far and wide these little-known deserts reach. Here, surprising destinations with otherworldly pretty deserts.

Southwest Bolivia is home to the largest salt flat on the planet, Salar de Uyuni, which spans more than 4,000 square miles. As you look out over the seemingly endless white, honeycombed landscape, you'll stand in awe its beauty. While driving through the area, you can experience extreme snowfall and scorching heat, all within a day. In addition to unpredictable weather, the elevation is also extreme — almost 12,000 feet above sea level — making it ideal to hire a guide for your journey. Don't forget to gaze up at the stars while you're here, since zero light pollution means a dazzling display of the galaxy at night.

It's no surprise that Peru offers a dramatic, diverse landscape. A five-hour drive down the coast from the capital of Lima, you may be equally as overwhelmed with beauty in Huacachina as you are standing atop Machu Picchu. You can take a bus tour into town, where a handful of boutique hotels welcome visitors. Though the tiny village is nothing special, the sand dunes that surround it are, well, spectacular. Dune buggies will take you to the very top — and then speed you to the bottom — of these rolling mammoths. Or if you dare, sand-boarding is a common thrill for tourists who trek to the area. Be mindful of visiting on the weekend, since bars and clubs keep the party going until dawn, making it difficult to sleep. For a quiet night, you can book a glamping experience and sleep in the dunes, where the only disturbance will be how insanely pretty the stars look.

This vast country has many wonders but this desert mountain valley is one that doesn't always make it to the top of travel guides. The name Spiti Valley translates loosely to "the middle land," which is a pretty straightforward way of describing its location, halfway between India and Tibet. Here, nestled among the Himalayas, you can really immerse yourself into the history and learnings of Buddha. You will need a guide to take you to this area, since populations and resources are rather scarce. Depending on what month of the year you can travel, you may not be able to access Spiti Valley since heavy snowfall and icy conditions permit treks. If you decide to invest in the journey though, you won't be disappointed: travelers report an almost magical experience in the cool, calm, spirit-filled hills.

Every stereotype you associate with a desert is probably defined by this massive sandy stretch of land in central Asia. As one of the largest on the planet — taking up 123,550 square miles — you will see red, earthy sand as far as the eye can take in at the Taklamakan Desert. It also features high elevations towering upwards of 4,900 feet in the west and south, and up to 3,300 feet in the east and north. To allow locals to cross and give travelers the opportunity to experience the beauty intimately, the country created two cross-desert highways, linking at various points, including Hotan, Luntai, Bayingol, and Ruoqiang. Although, heeding its ominous name, which translates to "place of no return," visitors should hire a professional guide.

Sonoran Desert in the U.S./Mexico

Though the vast majority of this desert is in Mexico, it stretches across the border, taking up some space on the Baja California peninsula. In fact, it reaches even to Arizona, creating plenty of land to cover if you don't want to use your passport to explore. Not to be confused with a rainforest, it does have some of the subtropical features of one, with a wide variety of vegetation and species. Unlike most dry heat deserts, the Sonoran does typically experience rain in the winter and a bit in the summer. This creates a happy nesting spot for succulents, super blooms, and, of course, gorgeous Instagram bait. Unlike other little-known deserts, you can explore parts of this one on your own, without the help of a guide. You can also trek by foot or by car, depending on how adventurous you want to be.

Get ready to pick your jaw off the ground when you take a look at photos captured in this incredibly otherworldly destination. It's located west of the Nile River and reaches to the Libyan desert, and is bordered on one side by the Mediterranean and by Sudan on the other. Technically, it's a smaller desert inside the large (and widely reported) Western Desert in Africa. What is luring photographers and courageous travelers is the large chalk formations that are seemingly frozen in time. Some look like mushrooms, others like tornadoes — but all are unreal. Many moons ago, the White Desert was a sea bed, and when it dried up, it left rock layers formed by marine plants and animals. As the winds blew in, they created these masterpieces. You'll need to hire an expert guide to get here — and prepare for a long journey.

More shrubs than sand, the Okanagan Desert won't have the red or white sand you associate with deserts but it will have red or white wine. Named after its location in the South Okanagan Valley in British Columbia, it encircles the town of Osoyoos. You'll see lots of small plants you can't find anywhere else in the country, dirt roads, and vineyards. For a romantic escape or a girlfriend getaway, it offers seclusion and retreat in a widely unknown area of Canada.

If you're keen to take a walk on Mars, this rocky desert in the northeastern part of South Australia is about as close as you can get on Earth. Though, you'll likely want a four-wheeler for this rugged landscape. Made up of gibber plains — "gibber" being the Aboriginal word for "stone" — this region is rockier than what you would expect. Here, there are sandstone hills dotted with siliceous stones that were broken down by the sun over time. 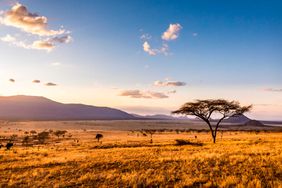 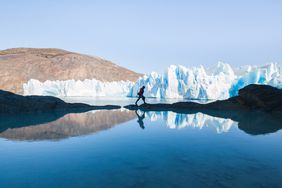