In the darkest of days, I bring myself back to that flower-filled valley in the sunshine and remind myself how it feels to be powerful, and to thrive.

It started in a vast meadow of the Colorado backcountry, mid-summer. In the distance, I saw what looked like a bear, but then realized the large, dark form was accompanied by a human. "It's just a dog," I said to myself, relieved. I gripped the leash of my small pup and called out: "Is your dog friendly?" Seconds later the animal — all 120 pounds — was upon us, lifting my dog by its neck, and knocking me to the ground in the dirt. After checking to see if my dog was OK (he was), I left the scene as quickly, but with me came a searing pain in my hip.

Nearly a year later, I was lying in a hospital in Vail, a large portion of the labrum in my left hip stitched back together. After two months on crutches, and several more months in physical therapy, the long and warm days of summer were quickly fading. I was ready to start traveling again — and I knew, for my heart and my mind to heal, it had to be Italy.

I travel to Italy once or twice a year (if I'm lucky). Over the last decade I've found myself renewed by writing in olive groves, picking through church ledgers with the village priest, spending late nights on the docks in Venice watching the gondolas bob in the waves lit only by moonlight. For me, Italy is the grandmother I lost when I was 6, it is the ideal dinner table with the perfect meal, it is where the language connects to some ancient part of my DNA. So, when I need to get back to myself, I go to Italy to try and locate that miracle balm again.

I also needed to get back into the mountains. I had never traveled in the Italian Dolomites, and I didn't know where to start, so I reached out to Agustina Lagos Marmol, owner of Dolomite Mountains, a guiding company that pairs travelers with local pros for adventures in this part of Italy. I told her about my injury and my goals: to challenge myself physically and get back to the mountain sports I loved without setting my recovery back.

Two hours from Venice, I drove over Passo Falzarego and first set eyes on the town of Cortina from above, which could very well be inspiration for a fairytale with its Tyrolean chalets, soaring peaks, and rolling green hills. Nestled in the Ampezzo Valley, this storied ski area was home to the 1956 Winter Olympic Games and is scheduled to host again in 2026.

Later that afternoon, from the terrace in my room at the Cristallo, a historic luxury hotel built for the European elite at the turn of the 20th century, I took in the astounding beauty of the mountains. I've seen many ranges, all of them striking, but the Dolomites, a UNESCO World Heritage site, might just be the most dramatic and breathtaking. Church bells rang from Cortina below, and as if on cue, the setting sun triggering an alpenglow, turning the jagged limestone massif from near white to gold, then rose to red.

The next morning, I met with my biking guide, Claudio Vecellio, and I admit, I was nervous. It had been more than a year since I had been on a mountain bike — and this wasn't any bike, it was an e-bike. I had never ridden one, and before that day I fostered a strange bias towards the technology. An e-bike, for me, was akin to cheating. Deep down I believed that If I couldn't crank myself up a trail on the bike, then maybe I didn't deserve to be there.

We set off connecting several trails through the woods, and the whole time I lagged behind my patient guide. About an hour in, Claudio turned to me and said, "It's OK to use the boost." As I approached the next uphill, I ramped up the assist from "eco" to "turbo," and even though I was sucking wind, the bike just kept moving. I was peddling, still working, but it was as if someone was pushing my saddle from behind. I laughed out loud, thrilled with the assist, and never looked back.

We rode for hours, connecting to the gravel trail of "The Long Way of the Dolomites," a former railway, with a short stop at the historic Ospitale refugio to eat a plate of beet ravioli with poppyseed sauce, typical of the unique cuisine found in the region here at the Italian-Austrian border. At the end of the ride, we snaked our way through small villages on the outskirts of Cortina. Before descending into town, we took a sharp left up a steep uphill and found ourselves rolling along singletrack through a field of pink and lavender crocuses. I stopped and laid down in the cool grass, running my hands over the wildflower petals.

"I found my happy place," I told Claudio.

This was just the beginning of my trip with Dolomite Mountains. I spent the next five days exploring mountaintops, where great battles of World War I between the Austrians and Italians took place, explored more singletrack in Alta Badia, soaked in the spa at the impeccable hotel La Perla, and took in my fair share of aperitivo, but in that moment, I had been restored.

In the darkest of days, I bring myself back to that flower-filled valley in the sunshine and remind myself how it feels to be powerful, and to thrive.

Italy is in my blood, literally, and a return to the north, to the south, or to the cities in between will come again, and not a moment too soon. 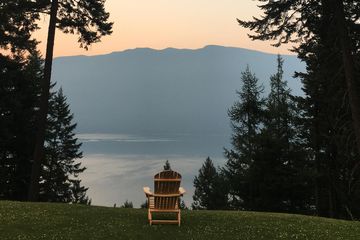 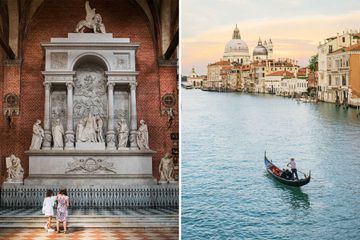 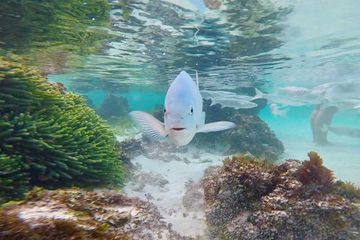 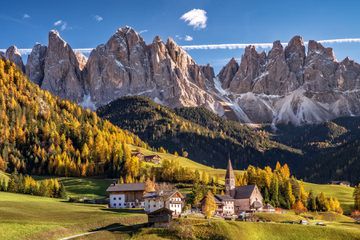