"There were once so many butterflies that the sound of their wings was described as a rippling stream or a summer rain." Now, it's up to us to get that back.

Just as the air begins to cool and the days become that much shorter, the iconic monarch butterflies make their arrival along the California coast.

By the thousands, the tiny little creatures bat their vibrant orange and black wings in unison as they find refuge from the cold for their long winter break. And it turns out, they choose many of the same destinations we do for our winter vacations.

This fall/winter may be the most important time yet to go see the butterflies and do all you can to help protect them for future generations.

Where the Butterflies Come From

"Migration is not an uncommon phenomenon," the department explains. "In October, as colder weather approaches, the butterflies instinctively know they must fly south to escape the freezing temperatures. Some have to fly over 1,000 miles. The journey is hazardous and many never make it. By November, most are sheltering in trees stretching from the San Francisco Bay Area south to San Diego."

As the department notes, the butterfly landing range is quite extensive, however, there's one spot in particular that the insects seem to love: Pismo State Beach.

"[It] hosts one of the largest overwintering congregations, varying in numbers from 20,000 to 200,000," the department said. The monarchs will live there for another six to eight months. On warmer days, they will fly away from their trees to find both food and water, before migrating north again around February.

Why Pismo? Because it happens to contain plentiful eucalyptus trees, which the butterfly loves for its winter home. For the 2021/22 season, visitors can go see how many butterflies they can count at the Pismo State Beach Monarch Butterfly Grove, which is open to the public for day use. The park also opens its Docent Trailer from 10 a.m. to 4 p.m. so visitors can ask all the questions they want, and they even offer daily talks at 11 a.m. and 2 p.m.

Nearby accommodations include the Vespera Resort, a charming seaside hotel that will help you make the most of the great outdoors, and Inn at the Pier, a contemporary boutique inn that prides itself on personalized service. There is also an abundance of Airbnbs available, including this adorable bohemian bungalow located close to the butterfly grove.

Why Now Is the Time to See Them

"Once, millions of monarchs overwintered along the Pacific coast in California and Baja, Mexico — an estimated 4.5 million in the 1980s. But by the mid-2010s, the population had declined by about 97%," Xerces Society for Invertebrate Conservation explains. "Starting in 2018, monarch butterflies had tough seasons in their migratory and breeding grounds in the western states. In the following two winters, the annual Xerces Western Monarch Thanksgiving Count showed that the population hit a new low: In both 2018 and 2019, volunteers counted under 30,000 monarchs — less than 1% of the population's historic size. In 2020, the population dropped even more to less than 0.01% of the historic size, volunteers counted under 2,000 monarchs."

And it's not just one thing harming the population, but rather, what scientists told The Guardian is "a death by a thousand cuts." This includes loss of land habitat, global warming, and the increase in herbicide insecticide use, which affects milkweed, the exclusive food source for monarch caterpillars.

In 2020, Xerces conducted a study sampling 227 milkweed leaves from 19 sites representing different land-use types across the Central Valley of California. It found 64 pesticides (25 insecticides, 27 fungicides, and 11 herbicides, as well as one adjuvant) across the plants. Pesticides, it said in the study, "were detected in every sample, even at sites with little or no pesticide use based on information from landowners." On average, it found nine compounds per plant across all sites.

"It's really difficult to pinpoint exactly what is the one thing affecting them most," Claire Pavelka, a biologist working with the non-profit River Partners, told The Guardian. "They've been likened to a canary in a coal mine...Monarchs are so well studied; they're really charismatic and really well known. But the fact that they're declining so fast is probably an indicator that a lot of other pollinators, and bees and other butterflies, are also declining."

How You Can Help

Though the situation is bleak, scientists say there is still time to save this beautiful creature, and there are ways you can help both big and small.

As for something even bigger, you can support the Center for Biological Diversity, which is working to add the monarch butterfly to the endangered species list and has called on Congress to "significantly increase funding to $100 million per year" to help conserve the butterfly and its habitat.

"There were once so many butterflies that the sound of their wings was described as a rippling stream or a summer rain," the center said. "Early newspaper descriptions described branches breaking under the weight of so many butterflies and depicted the masses of monarchs as 'the personification of happiness.'" Now, it's up to us to get that back. 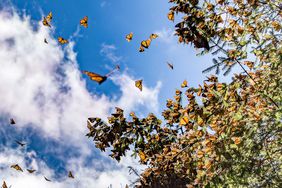 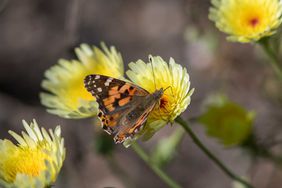 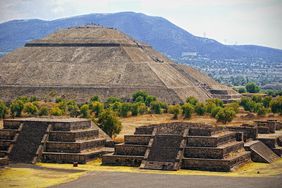