These Frozen Lighthouses Are Straight Out of a Fairy Tale

The first few minutes after a snowstorm are breathtaking — the short moments before hundreds of boots make their mark, commuters add mud to the pristine piles with their car tires, and the shovels start forging paths for walkers. But there are some spots that keep their winter wonderland sheen a little bit longer than usual. For example, the lighthouses along Lake Michigan’s shores. For years, photographer Tom Gill travels to the area to photograph the ice sculptures that form over the beacons, featuring tendrils of ice and delicate icicles. Gill has to wait for the perfect conditions for these ice formations to happen. Not only does the temperature need to be (and remain) well below 32 degrees Fahrenheit, but the surrounding water needs to remain unfrozen. The massive icicles are actually created by layers of water freezing into ice on the lighthouse. As the wind beats against the building, it brings a new blanket of liquid with it.Architizer reports that these lighthouses can accumulate several feet of ice in a matter of hours. You can tell the dominant direction of the wind by which way the tentacles point. Taking these photos is an annual part of Gill's “Christmas Vacation,” when he takes the first day of his trip to stop in South Haven, Michigan. The icicles are only a part of the visit: He also take the opportunity to do some last-minute shopping at the boutique shops in downtown South Haven. One of his favorite locations to photograph is the lighthouse in St. Joseph, Michigan. “The outer lighthouse generally gets the most ice, as it's located on the end of the breakwater and receives waves and splashes from three sides depending upon how the wind blows,” Gill wrote on his website. “There is also less chance for the waves to break and reduce size before hitting the breakwater. Splashes from the waves reach a height of 70 feet at times, and this spray is what creates the ice on the lighthouses and other surfaces.” As with many temporary installations that natures gifts us with as the seasons change, there's a sense of danger in visiting these lighthouses, as well. Stand underneath the wrong piece of ice at the wrong time and you're in for a nasty surprise. As the weather warms, these sculptures will slowly disappear, appearing different every day, much like Iceland's ever-changing Crystal Cave system. Want to know about Gill or purchase one of his photos? Check out his Flickr account. Read on for some insight from the photographer himself on his icy lighthouse shots.

The Sun Over St. Joseph Lighthouse

"The sun finally appeared in St. Joseph late in the afternoon, highlighting the ice on the outer lighthouse."

"Looking like the prow of a ship, the Grand Haven, Michigan fog signal building is completely enveloped in ice."

Visitor at the St. Joseph Lighthouse

"A daily visitor to the St. Joseph lighthouse checks out the build up of ice on the outer lighthouse."

The Outer Range of the St. Joseph Lighthouse

"The St. Joseph, Michigan outer range light is covered in a thick layer of twisted ice following a winter storm that created 20-foot waves on Lake Michigan. The splashes from those waves created interesting ice patterns on the tower."

The Catwalk at the St. Joseph Lighthouse

"Ice formed on the St. Joseph, Michigan lighthouse and catwalk during a winter storm that churned up Lake Michigan and created 20 foot waves."

A Photographer Outside of the St. Joseph Lighthouse

"A photographer sets up his gear, dwarfed by the ice boulders on the St. Joseph, Michigan lighthouse pier."

Detail of the South Haven Lighthouse

"A detailed view of the frozen, backlit South Haven, Michigan Lighthouse from the end of the breakwater."

St. Joseph Lighthouse in the Morning

Latern at the St. Joseph Lighthouse

"A close up of the ice formations on the lantern of the outer lighthouse."

"Barely recognizable under a thick coating of ice, the St. Joseph, Michigan outer light, withstands another brutal winter on Lake Michigan. Temperatures dropped near zero, and winds whipped up, causing massive icing on anything near the lake." 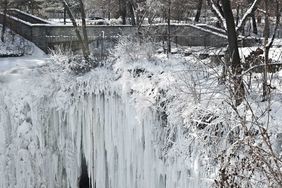