England is set to give long-distance hiking trails in the U.S. a run for their money with its new Coast Path, which is expected to stretch over 2,700 miles, surpassing both the Pacific Crest Trail and Appalachian Trail in length. In addition to some extra mileage, the route takes hikers along the English coast, making it the longest coastal walking route in the world.

Most, if not all, of the route is expected to be completed by mid-2021, with some stretches already finished. It will be opening in sections. Divided into four areas — north west, north east, south east, and south west — and a total of 66 stretches, the trail will follow the entire coast of England, and in some cases, provide first-time public access to the coastal margin — the area between the path and the sea.

Travelers can experience a short stretch, create a customized multiday trip, or complete the entire route. In addition to passing by coastal towns, ports, and cities, the path will introduce walkers to untouched meadows, rugged rocky cliffs, and swaths of sandy beaches waiting to be explored. The layout of the trail system allows travelers to experience the wild coast by day, before tucking into a cozy English pub (or a pub-turned-hotel) for dinner and drinks.

Starting with the north west section, the path kicks off near the Welsh border and heads north toward the Scottish border. Along the way, walkers will pass the lush Lake District National Park and historical ports dating back to Roman times, as well as get a feel for the country’s industrial heritage, from coal transportation to wind farms. The north east section picks up at the Scottish border and takes walkers along the North Sea coastline to the Wash bay. This stretch is home to beautiful beaches, castles, rocky cliffs, and tiny fishing villages tucked in sheltered coves.

Next up is the south east section, which stretches south from the Wash and then shoots west to Southampton. A huge stretch of coastline, this area showcases long empty beaches, nature reserves, and quaint piers. The final stretch — the south west path — picks up in Southampton and runs along the English Channel before turning north to the Welsh border. This section boasts some of the path’s most dramatic coastline, taking walkers along cliff tops and estuaries while linking coastal villages.

Once completed, the England Coast Path will be named a National Trail, a collection of the nation’s finest and most popular long-distance trails. The path is being created by Natural England, a public governmental body that’s responsible for protecting and improving England's natural environment. The project builds on the success and popularity of the Wales Coast Path, which travels 870 miles along the Welsh coastline before linking up with Offa’s Dyke Path to create a 1,030-mile continuous walking route around the entire country. 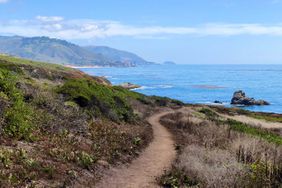