Sometimes all it takes to re-center and refresh your mind and body is a good day (or week — who are we to limit you) of staring off into a tranquil blue sea.

Related: White Sand Beaches for Planning That Vacation You Thought You Could Only Dream About

To help you find your inner peace, and catch a few waves and rays while you're at it, we've put together a list of some of the bluest waters in the world. These lakes, seas, beaches, and bays have vistas that range from brilliant navy blues to the lightest, clearest turquoises imaginable. Needless to say, they are the perfect places to reconnect with nature, family, and yourself.

It's hard to find a spot on Lefkada Island that doesn't have spectacular views of the crystal clear Ionian Sea, but Egremnoi (or Egremni) beach on the west coast is particularly stunning. The beach requires a steep hike down some ersatz stairs, which thins the crowds, but once you've made the descent, the white sand stands in stark contrast to the turquoise water making it ideal for spending the day relaxing in the sun.

The deep blue waters that fill the caldera of the sunken volcano Mount Mazama help make Crater Lake one of America's most beautiful lakes. The deep blue waters are almost crystal clear thanks to the fact that there are no incoming streams or rivers to make the water turbid. All of this makes it ideal for scuba divers willing to brave the chilly water. Crater Lake, located in Southern Oregon, is also the deepest lake in the United States, plunging to depths of 1,943 feet, with sunlight extending 400 feet down.

This appropriately named site in Jamaica is the stuff of legends. You’ll hear it’s bottomless (it’s actually about 200 feet deep) and that a dragon resides on its lush shores (we cannot confirm nor deny). The lagoon, just east of Port Antonio, is a perfect place to explore and recharge in its cool waters, which can range from turquoise to royal blue depending on the time of day. It’s fed by a mix of underground freshwater springs and saltwater from the Caribbean Sea, making it a great spot to cool off on a hot Jamaican day.

Sometimes it feels like the best views are the ones you have to work for, and it does take some work to get to Devil's Bay on Virgin Gorda in the British Virgin Islands. After you scrabble through the gem-colored Baths, you'll emerge on the tiny, picture-perfect slice of white sand known as Devil's Bay. It's worth the effort to get here just to snorkel in the clear turquoise waters of the Caribbean or simply sit back and admire the surroundings.

Two hours from the industrial capital city of Zagreb lies a natural wonder — Plitvice Lakes National Park. The woodsy park, which has been a UNESCO World Heritage site since 1979, is dotted with 16 turquoise blue lakes that are a staggering display of some of Mother Nature's best work. A wooden walkway winds through the park's upper and lower lakes giving visitors the chance to wander alongside and even over the tops of crystalline waterfalls, while boat tours give visitors a closer look at the deep blue waters.

A short boat ride from the largest barrier reef outside of Australia, Belize's Ambergris Caye is a scuba diver's and snorkeler's paradise. Head to Shark Ray Alley to snorkel among nurse sharks and stingrays; visit Hol Chan Marine Reserve to get up close with eels, turtles, and colorful fish; or explore the underwater caves of Blue Hole.

Spectacular waterfalls tumble into the brilliantly blue lakes at this UNESCO World Heritage Site in China's Sichuan province. The park's most famous attraction is the crystalline Five-Flower Lake — the startlingly blue water offers a window-like view to the bottom where fallen trees make a lace pattern on the lake floor. The water is so still and clear it mirrors the surrounding mountains and trees as well as the sky above.

This far-flung island paradise is part of the chain of Andaman Islands in the Bay of Bengal. It's not easy to reach, but it's worth the trip for anyone who craves snow-white beaches, aquamarine waters, and snorkeling far, far from any crowds. Swaraj Dweep (formerly called Havelock Island) is a great getaway for a tropical idyll that is completely off the grid. For true paradise among the palm trees, head to the translucent turquoise waters of Radhanagar Beach (Beach No. 7) at sunset.

Off the coast of Cartagena lies a tiny chain of mostly-uninhabited islands called the Islas de Rosario. The white sand beaches are lined with mangroves and the brilliantly deep blue waters are home to Colombia's largest coral reef, which is home to over a thousand different tropical critters. Most hotels are located on Isla Grande and can arrange to have a boat take you island hopping to explore the wonders of this area.

This lake in Banff National Park owes its brilliant blue hue to the icy meltwater and silt from the Peyto Glacier and the Wapta Icefields. The sapphire-blue lake is best viewed from the Bow Summit near Alberta's Lake Louise, which is where most of the postcard shots of the gem-colored lake are taken. Intrepid visitors can also hike down to the lake and the glacier. You can always rest off sore muscles at Banff's natural hot springs.

As some of the world's best islands, it's no surprise that the Maldives is a favorite destination for celebrities. This island nation, between the Indian and Arabian seas, is known for luxuriously appointed resorts with bungalows set over dazzling blue waters and is surrounded by talcum-soft white sand beaches — basically everything that vacation dreams are made of. When not simply admiring the view, visitors can spend days exploring the coral reef, visiting an underwater playground, or relaxing in one of the world's best spas.

Although it's just a quick flight from Manila, Palawan feels like it's a world away. The sparsely-populated archipelago is made up of jungle-filled islands surrounded by stunning teal waters teeming with fish and coral reefs and an incredible array of lagoons, coves, and secret beaches. Explore the waters of El Nido, where tropical fish swarm around the coral reefs, go diving in the azure ocean off of Linapacan Island, or bravely swim through one of the world's longest underground rivers.

Known colloquially as "Giant Swimming Hole," this local swimming spot in the South Pacific is a natural wonder. To enjoy the translucent teal water, visitors must hike through a lush forest in the lava fields outside of Lotofaga village on Upolu Island in Samoa. From there it's a long climb down a steep ladder — or for the bravest, a quick jump — into the hole that is almost 100 feet deep. The water comes in from lava tubes that connect to the ocean, making sure that this downright gorgeous swimming hole never dries out. 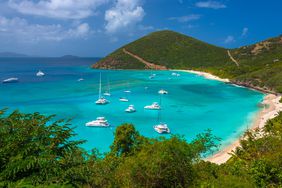