Will you make 2020 the year you see the northern lights? A winter phenomenon in the Northern Hemisphere, the dancing green lights are the result of charged particles from the sun colliding with nitrogen and oxygen atoms in the earth's atmosphere. They have to be seen to be believed, and there's no better time than in January, with the long Polar Nights in the Arctic Circle maximizing your green sky time.

Oymyakon, at 63° N is the world’s coldest inhabited place, and it has long, dark nights in January that frequently host the northern lights. This seven-day tour to Oymyakon from Yakutsk in eastern Siberia includes dog sledding and a trip to the UNESCO-recognized Lena Pillars Nature Park.

Tromsø is above the Arctic Circle at 69° N, so it experiences the Polar Night from the end of November to the end of January. Head there for the Polar Night Half-marathon on Jan. 4, 2020, an event that last year attracted around 2,000 people.

Forget Times Square this New Year’s Eve and instead welcome 2020 with nature’s own fireworks display at 69° N in Greenland, an autonomous country within the Kingdom of Denmark. You'll get to celebrate twice; Danish New Year is four hours beforehand, so festivities commence at both 8 p.m. and midnight local time. Will the aurora dance twice to ring in 2020?

Alaska's second city sits at 64° N about 180 miles south of the Arctic Circle, and while it's not the absolute best place in the state to see the aurora frequently, it’s so easy to get here. The nearby Chena Lakes Recreation Area is the spot to hang out, though Cleary Summit, Haystack Mountain, Ester, Wickersham and Murphy Domes are popular places to go, either independently in a 4x4 or on guided tours at night. Twice a week in winter, the Alaska Railroad runs its 12-hour Aurora Winter Train from Anchorage. It takes 12 hours.

If you want to get well into the Arctic Circle to experience the Polar Night, there's only one place to go. Known as the northernmost town in the World, Hammerfest lies at 70° N and from late November to late January experiences almost 24 hours of darkness. Cue the constant possibility of northern lights.

At 64° N and easy to get to, Iceland's small, sophisticated capital city is the perfect destination for anyone who wants a glimpse of the northern lights but doesn't want to travel to remote locations. The Dark Music Days festival of contemporary and new music, held from Jan. 25 through Feb. 2, 2020, takes place at the city's Harpa concert hall.

Finland's largest and most popular ski resort provides a great reason to come to almost 68° N, beyond the Arctic Circle. The most reliable month for both snow and northern lights, organized activities in the resort town in January include nightly snowmobile safaris, northern lights hunting in Pallas National Park, and a private dinner in a cottage equipped with a camera and tripod in case the aurora arrive.

The northernmost town in Sweden, Kiruna in Lapland is at 68° N, and it's ideally placed for exploring local Sámi culture and the remote Abisko National Park. To celebrate the end of the Polar Night, Kiruna will hold its annual Snöfestivalen (including snow sculptures and kids’ playgrounds built with snow). The festival takes place from Jan. 22-26, 2020.

Russia doesn't get much attention as a northern lights destination, but Murmansk at 69° N in the country's northwest region is as well placed as anywhere in Scandinavia. Nearby Kola Peninsula is a good place to hunt for the northern lights.

The Northern Alaska Tour Company’s two-day Arctic Circle Aurora Fly Drive Adventure (from $559) runs from August through April, during which you’ll search for the aurora from a cabin in the ultra-remote Brooks Mountain Range, at 67° N. Dog mushing adventures and backcountry snowshoe tours are common here.

The Arctic may be the HQ for aurora, but by day it’s also famous for whale watching. Male Sperm whales gather to feed near Andøy all year round, but January sees the arrival of orcas, humpback whales, and fin whales.

This archipelago in the North Sea doesn't often get a mention as a northern lights destination, but at 62° N (it’s about halfway between Scotland and Iceland), it gets plenty of aurora action. If you need another excuse to visit the “Jewel of the Atlantic,” its tiny and charming capital city, Tórshavn, holds a Winter Jazz Festival during the last week of January.

How about a moon-bow with your northern lights? Although hard to predict, the spray from south-facing Skógafoss waterfall in southern Iceland, already in prime aurora-viewing territory, sometimes produces a moon-bow on or near full moon. It’s like a rainbow, but produced by the light from the moon rather than the sun.

It's not just reliable northern lights and relatively warm temperatures that bring tourists to Iceland in January. It's also Ora (killer whale) watching season here, and they can be seen from land on the western Snaefellsnes Peninsula at at 64° N.

Northern lights photographer Rayann Elzein is hosting a five-day workshop from Jan. 5-12, 2020 in Utsjoki, Finland. Here at 70° N you'll explore the fells and landscapes around Utsjoki, chase aurora, and learn how to edit your landscape and night photos.

Seeing the northern lights is easy: stay in the Arctic Circle away from light pollution and wait. That's what the Hurtigruten Northern Lights Astronomy Voyage does for 12 days starting January 19, 2020 (among other dates), when it sails from Bergen at 60° N to Kirkenes at 69° N and back, complete with lectures and guided tours of the night sky from the deck of the ship delivered by astronomer Dr. John Mason. 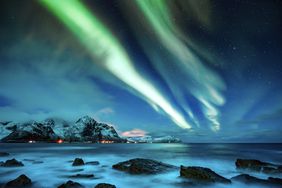 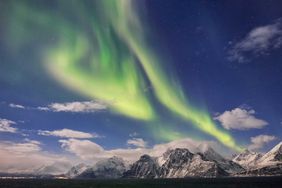 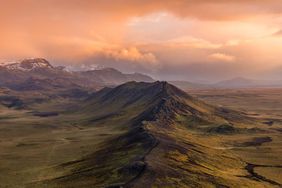 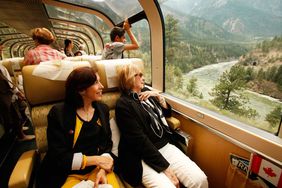