Headed to Mount Rushmore? Stop at Badlands on the way.

At first blush, "it doesn't sound like the best place to go," admits Christine Czazasty, the chief of interpretation and resource education for Badlands National Park. After all, the National Parks Service veteran laughs, "it's called Badlands!" But these 244,000 acres are gorgeous, with towering, striated red-and-gray rock formations that transform into a veritable rainbow at magic hour. Not to mention all the wildlife visitors can see here — big-horned sheep, bison, burrowing owls, and whole towns of adorable prairie dogs. Czazasty walked us through some of her favorite things to see and do in the South Dakota park.

A Guide to the National Parks of Texas

"Badlands is really a story of erosion," says Czazasty, noting the pyramid-like formations that make this part of the world so very stunning. Along with the scenery, though, it has a ton of "phenomenal fossil resources" devoted to prehistoric mammals. So yes, you could do one or more of the scenic loop drives, which are easily accessed and have a number of overlooks for snapshots, but it's worth parking and walking around. At the very cool Ben Reifel Visitor Center, tourists can interact with paleontologists that are preparing mammal fossils they've found in the park.

Not hands-on enough for you? No problem. Wanna-be paleontologists can take advantage of what's called an "open hike policy." You can "go pretty much anywhere into the Badlands," says Czazasty, and if you find a fossil and report it at the visitors' center, pro-paleontologists may check it out. You'll get your photo taken and have reports sent to you when you're back home, telling you what you discovered. This wonderfully geeky tradition results in hundreds of such reports, says Czazasty. Plus, looking for prehistoric skeletons is one great way to keep kids from asking "Are we there yet?" while hiking.

15 Least-visited National Parks in the U.S. for Beautiful Views and Adventure Without the Crowds

Two of the best campgrounds in Badlands National Park include Cedar Pass, which has all the conveniences of reservations, hot showers, and bathrooms, and Sage Creek, which is first-come, first-serve. Plan well in advance for the former, and get there early for the latter, Czazasty suggests.

If you're planning on swinging through the Badlands, check road conditions beforehand, too: If it's rained, a lot of roads can get muddy and impassable. And if you're planning on venturing out into the park, you must bring a compass and a paper map. "One of the things we have to deal with is rescuing people who are lost," she warns, so don't rely on GPS.

A guided ranger walk is one of the most fun things to do in Badlands National Park. You'll learn about the mixed-grass prairie country, the geology, and the animals. You might spy bison, hear the distinctive trill of a meadowlark, or even encounter endangered black-footed ferrets.

Bring your camera, not only because of those unique critters but also because the park seems to transform throughout the day. "We have a big artist-in-residence program here at the park. Whether they're photographers or painters, the light is constantly changing the look of the Badlands." She sees countless photographers setting up tripods on the northwest side of the park in particular — the best place to catch the sunset and admire this wild stretch of Middle America.

Even if you're driving on through to get to Rushmore and it's already nighttime, check for local events. The Badlands Amphitheater occasionally hosts an astronomy group from a nearby city, breaks out telescopes, and lets you study the starry night sky. It's easy to understand why so many pop culture standbys — "Dances With Wolves" and "Starship Troopers" among them — were filmed here. 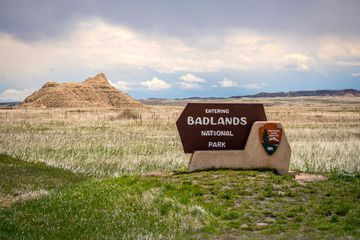 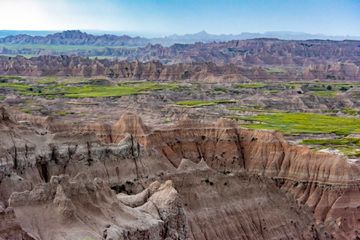