These memorable mother-daughter trips are ideal for bonding.

Mother's Day may be right around the corner, but it's never too late to plan a last-minute escape. Whether you prefer gallery hopping, hiking, or wine tasting, these 10 U.S. destinations make the perfect mother-daughter getaways. No matter where you choose, lifelong memories and loads of fun await.

Wellness-seekers of all ages will appreciate a trip to Sedona. The Arizona destination is known for its stunning red rocks and energy vortexes, where travelers go to reflect and meditate. After working up a sweat hiking Cathedral Rock or Bell Rock (both of which are considered energy vortexes), grab a bite at the fan-favorite Elote Cafe, which serves up regionally inspired Mexican cuisine like elote, queso fundido, and carne asada. Following an adventure-filled day, retreat to your room at Amara Resort and Spa, beloved for its serene spa, heated outdoor infinity pool, and contemporary accommodations complete with private patios or balconies.

Sure, Austin is cool, but for a more laid-back escape that's just as enticing, consider a trip to San Antonio. Whether you're touring The Alamo or strolling the River Walk, the city is full of sights, sounds, and attractions that will entertain visitors. San Antonio is also just one of two U.S. cities to be named a UNESCO Creative City of Gastronomy, which means mouthwatering eats abound.

Treat mom to an idyllic oceanfront vacation in Clearwater, Florida. The dynamic city is popular for its soft stretches of white-sand beaches and emerald-green waters. Its namesake Clearwater Beach is a stellar spot for fishing, sailing, and water sports. Alternatively, visitors choose to kick back and lounge or walk along the shore. Nearby, you'll find a slew of restaurants and shops along palm tree-lined Cleveland Street. When it comes time to refuel, don't miss the margaritas at Tequila's Mexican Grill & Cantina or local seafood staples at Roxy's Bistro.

Philadelphia is best known for its rich, fascinating history (think: the Liberty Bell, Independence Hall, Museum of the American Revolution, and Betsy Ross House, among others), but go beyond the basics, and you'll be pleasantly surprised. In fact, the City of Brotherly Love is in the midst of a culinary resurgence, with innovative eateries like Laser Wolf (considered one of the world's best restaurants) and Lark (which opened in October 2021) popping up all over. You can also explore the city's eccentric arts scene by wandering through Philadelphia's Magic Gardens.

A trip to Asheville affords you and mom some quality time in nature. The city, flanked by the Blue Ridge Mountains, is a popular spot among hiking and biking enthusiasts. In fact, the destination — and its surrounding region — boasts a whopping 3,000-plus miles of free trails. Afterward, make your way to the massive Biltmore Estate for a tour or wine tasting. Or, hit the 43,000-square-foot spa at the Omni Grove Park Inn, equipped with several pools, including one with 6,500 fiber-optic stars and underwater music, as well as eucalyptus-infused steam rooms, fireside lounges, and much more.

Escape to California's wine country region for a fun, vino-filled vacation. For a more under-the-radar locale, look no further than Healdsburg. This charming Sonoma County town makes the perfect home base for exploring and wine tasting your way through the surrounding area. Here, you'll also find dozens of acclaimed wineries like Ferrari-Carano Vineyards and Winery, J Vineyards & Winery, and Dry Creek Vineyard. In between eating, drinking, and shopping, make sure to explore Healdsburg Plaza, one of the most beautiful town squares in America.

New York's Hudson Valley is dotted with quaint towns, and Hudson is among the most popular. Warren Street, which spans around a mile, is chock-full of eclectic stores, boutiques, eateries, and galleries. Go antiquing at Finch Hudson, grab a few beauty products at Face Stockholm, pick up some new wardrobe stapes at Unracked, or snag some home goods at Fig & Bella. After shopping to your heart's content, sit down for a bite at Swoon Kitchenbar or Lil Deb's Oasis. Additionally, the Hudson Farmers' Market draws crowds — and more than 30 local vendors — every Saturday from late April through November. Stay in the center of all the action at The Maker, an effortlessly chic boutique hotel right on Warren Street.

Southern hospitality is on full display in Savannah. The picturesque riverfront city boasts lush parks and green spaces (including Forsyth Park, which is shaded by expansive oak trees), plus beautiful centuries-old architecture. The Savannah Historic District — the largest National Historic Landmark District in the country — is home to dozens of churches, museums, mansions, and more. If you're up for some thrills, embark on a ghost tour of the city. Alternatively, indulge in Southern comfort classics like fried green tomatoes at The Olde Pink House, which occupies an 18th century-era mansion, or Vic's on the River, housed in a 19th century-era warehouse.

With its pueblo-style architecture, centuries-old history, and world-renowned art scene, it's no surprise that Santa Fe has — and continues to — draw visitors from all over the country. The namesake Plaza is considered the heart of the city, and the surrounding downtown area is walkable, so be sure to bring a comfy pair of sneakers. From there, embark on the city's Margarita Trail, go gallery hopping on Canyon Road, or wander through exhibits at the Palace of the Governors, Georgia O'Keeffe Museum, New Mexico Museum of Art, or Museum of International Folk Art. Top it off with a bowl of the city's famous chile at The Shed, a local favorite.

This coastal New England city is lined with Gilded Age mansions, including The Breakers and Marble House. After touring the expansive grounds, enjoy an oceanfront stroll along the nearby Cliff Walk before popping into The Chanler at Cliff Walk for lunch (cocktails recommended). If the weather's nice, hop aboard a sunset or sightseeing boat tour — Newport is considered the sailing capital of the world, after all. Otherwise, shop along Thames Street or hit the spa at The Vanderbilt, Auberge Resorts Collection, a 1909-era mansion-turned-luxury hotel. Brunch at The Lawn at Castle Hill Inn is also highly recommended. (Tip: order the lobster roll.) 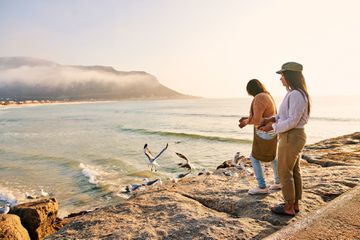