This Tiny Island in Louisiana Is Made for Warm-weather Getaways Thanks to Its Fresh Seafood, Birdwatching, and Stunning Beaches

When Hurricane Ida tore through Louisiana last August, it left a trail of destruction in its wake. The Category 4 storm caused record devastation to the state, particularly impacting areas along the coast. Now, six months later, one tiny island has re-emerged and is ready to welcome back visitors. Particularly if those visitors are professional ornithologists or, at the very least, extremely enthusiastic bird watchers.

After months of rebuilding and recovery efforts, Louisiana's Grand Isle, the state's only inhabited barrier island and one of the most impressive sights along the state's Highway 1, is back and perhaps better than ever.

The island announced several important reopenings (although its famed Grand Isle State Park remains closed at this time), including Elmer's Island Wildlife Refuge, which welcomed its first guests back in February. At the refuge, guests can now explore all 1,145 acres of land, including its saltwater marshes, coastal dunes, and beaches.

The reopening is particularly good news for birders who come to Grand Isle each spring. Hundreds of different species stop to rest at the refuge before continuing their migrations north from the Gulf of Mexico. Birds like piping plovers, red knots, reddish egrets, marbled godwits, black skimmers, and magnificent frigatebirds are all visible at the refuge during this migratory pause. And, if you time your visit right, you can take part in the annual Grand Isle Migratory Bird Celebration, which kicks off on April 23, 2022.

But the birds aren't the only draw to Grand Isle. The island also happens to be a vibrant location for fishing. Fishermen can catch blue crab, spotted and sand seatrout, sea catfish, red drum, and southern flounder in the island's waters. And for those who prefer their fish on a plate, the seafood on the island is mouthwateringly fresh. Try spots like the Lighthouse Restaurant, which serves towering seafood platters that will leave you full for days, and Starfish Restaurant for particularly yummy shrimp and oysters.

Grand Isle's visitor accommodations are also ready to welcome guests back for an overnight stay. Cabins and homes are available to rent, and there are RV sites for those who choose to drive down. Several hotels have also announced their reopening after the storm-induced closure, including the Sun and Sands Cabins, which plans to open by May 2022, and The Hurricane Hole, which is already open.

For those looking to visit, check out Grand Isle's website and start plotting a getaway now. 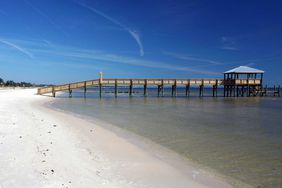