The water rippled as the wind picked up on the pond. I flicked my rod, watching the lure dance above the surface and back in the air — straight into a tree. Henry Hudson, who oversees adventures for Blue Sky and bears no relation to the explorer of the same name, laughed it off and pointed across the shore. "See how the waves are going toward that bank? That's your spot right there." I trudged in my waders through the last dregs of snowpack and cast. Nothing. Stick. Nothing. Cattail. Nothing. Nothing. Then resistance, a brief tug-of-war, and finally: a trout, iridescent and speckled, flopping in the net. I was elated. I texted my husband a photo — me dopey and grinning like a golden retriever, my fish slack-jawed and muscling against my grip, Henry Hudson smiling encouragingly over my shoulder — along with a message: "We have to move to Utah."

Before this trip, I'd never given Utah much thought. I knew of the big things, of course: The Great Salt Lake. Arches and Canyonlands and Zion, which seemed like their own places somehow. Notable Utahn Tan France of Queer Eye fame. Mormons, naturally. The state as a whole existed in my peripheral vision as a maybe-someday destination. But after a stay at the Lodge at Blue Sky, Auberge Resorts Collection, a new resort set on 3,500 acres near Park City, I was sold.

The property is the brainchild of Mike and Barb Phillips, who wanted to share their favorite weekend retreat with the world. They launched Blue Sky as an adventure destination almost a decade ago, hosting heli-skiing and trail rides, weddings and corporate events. In 2017, they partnered with Auberge Resorts to bring their hotel vision to life. The lodge debuted in early June with 46 rooms and suites, a restaurant, an expansive spa and pool, and all the activities of their original venture.

I arrived via helicopter — you could just drive in, but if you have the option to make an entrance, I say go for it — and as we descended, we spotted a herd of elk. The animals weren't doing much besides standing dumbly, chewing and staring up at us, but I was awed. Coming from a place where the wildlife is mainly limited to pigeons and rats, I found the sheer density of animal life — there are also coyotes, moose, and eagles — thrilling. “Look, elk!” I’d say. “Look, deer!” “Look, a ground squirrel!”

The real magic of Blue Sky doesn't reveal itself immediately. The landscape, while beautiful, lacks the showy, epic quality of Yellowstone or Moab that makes your breath catch in your throat. But the air smells like sage, and the lodge cocoons you in the comfort of little luxuries. In my room, I was greeted by a tableau of house-made snacks — jerky, maple-candied bacon, chocolate bark —and Old-Fashioneds made with whiskey from High West Distillery, just up the road. Each night, a note appeared on the nightstand, along with some small bauble: a shoe from the horse I’d ridden that day, or a bundle of dried sage picked on property. (I was even more charmed to learn the notes were jotted on paper handmade for the lodge by senior guest manager Lane Stoltzner’s mom.)

Blue Sky is the rare place where everything is done a certain way merely because that's how things should be done. The Phillipses run it as a sort of wildlife sanctuary, and an on-site farm serves as a refuge for downtrodden livestock: formerly veal-bound steers cast off by dairy farmers; horses saved from abuse, now spoiled with organic carrots; even rescue chickens. When complete, the farm will host a kids' program and supply organic produce to the kitchen. The property has all the usual hallmarks of an eco-friendly resort, like glass bottles instead of plastic and a water-reuse program. But there are subtler gestures, too: on the sporting clay course, all the clays are black and white so as to better blend into the landscape, the course is oriented to avoid noise pollution, and the ammunition is imported from the U.K., since shells with biodegradable wadding are a rarity in the U.S.

I stayed in one of the five Creek Houses, stand-alone one-bedroom suites overlooking Alexander Creek, a stream that meanders through the property. My room was bright and breezy, with a fireplace, wood paneling, and an accent wall made of stone quarried nearby. A carved relief map of the Blue Sky parcel hung in a corner, the creek slicing through in a ribbon of copper. Outside, the terrace was just the right size for, say, a cowboy cookout of fresh-caught rainbow trout with white asparagus and fry bread. You can take a few steps down toward the shoreline and fish right from your backyard for Bonneville cutthroat, a native trout that, in much of the state, has been crowded out by invasive species.

Related: The Utah Ski Destination You'll Want to Visit Next

Fourteen-foot-high windows ran the length of the southwestern side of the suite, and when I threw them open the smell of sagebrush and the sound of rushing water filled the air. But with so many adventures at hand, the cozy rooms are merely a bonus. The lodge makes even rough-and-tumble pursuits feel somehow indulgent and special. Shooting, for one, is done European-style: the instructors wear tweed and ties in lieu of camo. Trail rides start with a natural horsemanship experience in the property’s massive indoor remuda, where you learn to curry, tack, and warm up your horse before setting out on the land. After a session of axe-throwing, you can retire to a furnished yurt on a knoll for whisky by the fireplace. Even my fly-fishing excursion culminated in a shore lunch with fur-draped chairs and tomato soup poured from thermoses. Throughout all this, you're shepherded by genial, attentive staffers, every one of whom appears to have just stepped out of a Patagonia catalogue.

One morning, after a deadly one-two punch of brunch Bloody Marys and horseback riding, I headed to one of the outbuildings for yoga. Mats were unfurled on the wood floor around a vignette of singing bowls, antlers, and crystals on a sheepskin. I braced myself — yoga has a way of ratcheting the anxiety loop playing in my brain up to double speed. But soon, I felt my shoulders unclench as instructor Rocky Lavoie led us through a flow, alternating guidance with gentle guitar playing and soft singing, her voice ethereal and reassuring. The windows were open, and outside, the breeze in the aspens sounded like rain. My brain was quiet but for one flickering thought. I should really move to Utah. 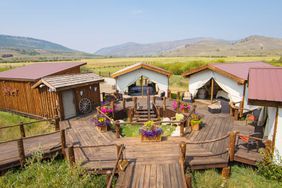