From Tuscany to the Dolomites, Italy’s vast and varied landscape is perfect for adventure travel.

As the coronavirus pandemic continues to grip the world, it's hard to imagine a day when travelers will willingly crowd into the corridors of the Vatican Museums, squeeze into St. Mark's Basilica, or sunbathe elbow to elbow on an Amalfi Coast beach.

So, what's a vacation in Italy without crowded attractions, busy piazzas, and closely arranged restaurant tables? It's an active adventure waiting to happen.

While it's famous for its cities, museums, and monuments, Italy is also full of wide-open spaces, including those familiar rolling fields of Tuscany, the Apennine and Dolomite mountain ranges, and vast stretches of rugged terrain in the south. And all that space and solitude mean plenty of fresh air and room for safety and exclusivity. Adventure travel in Italy offers active vacationers a way to see the natural side of the country, stay in rural and semi-private accommodations, and enjoy excellent local food and drink. So, instead of the well-trodden Rome-Florence-Venice circuit, consider these less-traveled journeys in Italy's magnificent outdoors.

Walk the Via Francigena Path

Italy's answer to Spain's Camino de Santiago, the Via Francigena route starts in Canterbury, England, and stretches for 1,700 kilometers (1,056 miles) through France, Switzerland, and Italy, culminating in Rome. Four hundred glorious kilometers (248 miles) run north to south through Tuscany, and walking even a stretch of the path puts you in touch with the earthy, natural beauty of Italy's fabled heartland. The classic portion from the walled city of Lucca to medieval Siena is 132 kilometers (82 miles), typically spread out over seven nights. Stay in historic hotels in city centers, at simple pilgrim hostels, or at cozy agriturismi (farm stays) amid the iconic Tuscany landscape. Pointy cypress trees? Check. Rows of undulating grapevines? Check. Super Tuscans, salami, and pasta with porcini mushrooms? Check, check, check. Camino Ways can set you up for a weeklong hiking or biking trip with overnights in basic or luxury accommodations, plus meal and luggage transport options.

For thousands of years, shepherds across the world would seasonally migrate their flocks of sheep between lowlands and highlands, a practice called transhumance. The movement shaped rural culture in Europe so much so that UNESCO added it to its List of the Intangible Cultural Heritage of Humanity. Industrialized farming has eradicated transhumance in most places, but in Abruzzo, the mountainous region east of Rome, the practice lives on. In June and July, curious trekkers can join shepherds and their flocks for a few days and nights, wending along rushing rivers, through crumbling stone villages and Roman ruins, and up steep mountain tracts until the herd arrives at its summer stomping grounds. These are bucolic days indeed, with stops for snacks of bread and cheese and someone's homemade wine or fruit tart, hearty lunches and dinners, and sleeping under the stars (or, for those seeking more creature comforts, at a simple inn). Nunzio Marcelli, a legend among transhumanza proponents, organizes four-day, three-night trips through La Porta dei Parchi agricultural cooperative.

In Italy's craggy Dolomite Mountains, a series of rustic huts provide hikers with simple, comfy overnight stays and rib-sticking meals. Called rifugi (plural of rifugio), these high-altitude accommodations — some 2,500 meters (8,200 feet) above sea level — have welcomed weary mountaineers for a century or more. The region of Trentino alone has more than 140 rifugi, typically open from June through September. Some are reachable only on foot, while others are connected by roads or cable cars. But all are a welcome sight after a long day of lung- and thigh-scorching trekking. Accommodations range from cozy private rooms and family rooms to simple (and now, socially distanced) dorms. Virtually every rifugio has views that will leave you gobsmacked, and a nighttime celestial show that will make you forget all about flat-screens and Wi-Fi. Majestic doesn't even begin to sum it up. Visit Trentino has information on staying at rifugi, which must be booked in advance, including distances and degrees of difficulty for hiking from hut to hut.

Journey to Mount Etna on Horseback

Greeks, Romans, Byzantines, and Normans all rode through the seaside town of Cefalù, Sicily, the point of departure for a horseback trek to Mount Etna, some 130 kilometers (81 miles) away. On the way to Mount Etna, riders log up to eight hours a day in the saddle, traversing ancient roads through beech forests and alongside mountain lakes, and passing castles and villages rich with history. The Tyrrhenian Sea, with the Aeolian Islands in the distance, appears at turns until finally, Italy's largest active volcano is front and center. Climb past Mount Etna's orchards, vineyards, and olive groves to reach the closest you might ever come to riding a horse on the surface of the moon. Spend the night in rural farmhouses and dine on fresh farm-to-table products, local specialties, and of course, wine from grapes cultivated in the region's mineral-rich volcanic soil. Unicorn Trails organizes eight-day, seven-night programs that include meals, overnights, and transfers. 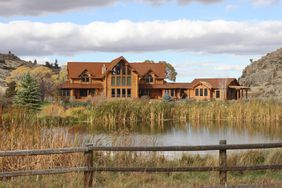 This New Luxury Lodge in Wyoming Is Set on a Working Ranch — With Epic Stargazing, Alpine Lakes, and Mountain Views