"So, what took you so long to come to Bermuda?" My husband, Rob, and I were sitting at the handsome wood-paneled bar of the Rosewood Bermuda, and the bartender, Owen Lightbourne, was ever-so-politely calling us out. We'd just arrived at the palatial resort, which sits a stone's throw from sprawling estates owned by people like Michael Bloomberg and Ross Perot. There are four pools, a croquet lawn, and sweeping ocean views. Our room wasn't ready yet, so we were killing time while our toddler, Bobby, happily ran between our seats.

The honest answer, we explained, was that we'd put Bermuda off because it always seemed too close, too easy. Before parenthood, our priorities were faraway and exotic. Now a destination within easy reach — one with beautiful beaches, no less — is salvation.

But you don't have to be a parent to appreciate Bermuda's appeal. A fishhook-shaped archipelago with pink shores in the middle of the Atlantic, it is quiet, beautiful, and steeped in history. First inhabited by the English in 1609, Bermuda was a trading hub for hundreds of years. In the 20th century, it became a vacation spot for the East Coast elite, who would hop over to golf and tan and sip rum swizzles at the Elbow Beach hotel, a mainstay in the 60s and 70s. In later decades, as development slowed and tourism took a back seat to more lucrative industries, such as insurance and banking, the glitterati decamped for the scenier, sunnier Caribbean islands of Anguilla and St. Bart's. I still have to remind friends, many of them savvy travelers, that this British overseas territory is not in the Caribbean, but 650 miles due east of North Carolina — with a similar high season that runs May through September.

In the past few years, though, Bermuda has made a comeback, in part because it was the location of the 2017 America's Cup. The high-profile sailing regatta provided incentive for new hotels to open and old hotels to spruce themselves up. What's more, couples are again choosing Bermuda for an easy seaside escape, thanks to its Zika-free beaches. More luxury resorts will be opening in the next two years, along with a new passenger terminal at the airport. As I discovered during my visit, Bermudians are excited to have their home back in the conversation again. Here, the top reasons to visit right now.

The hotels are upping their game.

Before staying at the Rosewood, we checked in to the Loren (doubles from $550). "People tell me their parents used to come here," explained Stephen King, the hotel's developer, over coffee at the open-air restaurant. When the British-born, New York-based financier found a decaying property on Pink Sand Beach, a quiet spot along the southern shore, he saw potential in those sweeping Atlantic views. So he tore down the old structure and embarked on the island's first new build in nearly a decade. The Loren, he says, "shows what Bermuda can be." The 45 suites, with their warm wood floors, crisp blue accents, and freestanding tubs, are stylish and spacious, starting at 600 square feet. At the cliffside infinity pool, we saw couples staring out to sea, as if hypnotized by the waves crashing over the rocks. At first we felt slightly out of place with Bobby, but the staff put us at ease by spoiling him with fries and pizza.

Two luxury resorts, both from Marriott International, are in the pipeline. The 79-room Ritz-Carlton Reserve Hotel at Caroline Bay, overlooking a secluded cove on the West End, will open in 2019. The 122-room St. Regis Bermuda, near the eastern town of St. George, will follow in 2020. Meanwhile, older properties are shifting away from British-colonial décor. Thanks to a $100 million revamp, the 133-year-old Hamilton Princess & Beach Club (doubles from $379), a grand pink-and-white building in the heart of the capital, Hamilton, now doubles as a contemporary art museum, with blue-chip pieces by the likes of Jeff Koons, Banksy, and Ai Weiwei. Our suite even had a Warhol.

And this month, the Rosewood Bermuda (doubles from $728), a 92-room property in the tony enclave of Tucker's Point, unveils its new look. What was a formal library is now a more casual bar, while the rooms have lost their penny-tile bathrooms and writing desks for a more streamlined aesthetic. What hasn't changed: the secluded, quarter-mile beach. On a clear October day, we played with Bobby in the sun-warmed waves to his endless amusement (and ours). I didn't need to fly to Bali to find this level of joy.

Related: The Top 25 Resort Hotels in the Caribbean, Bermuda, and the Bahamas

Someone else does the driving.

By law, tourists can't rent cars in Bermuda. They can, however, ride mopeds, which can be a hair-raising experience, thanks to traffic and twisty roads. As of last year, there is also the Twizy, an electric car outfitted with two cockpit-style seats—fun, but it only works if you're traveling as a couple. I suggest the public bus or taxis, the latter especially for the convenience factor. With a toddler in tow, taxis, though not always the most economical route, were our choice because we could appreciate the surroundings and beach-hop with ease. Bermuda's winding rural roads, edged by centuries-old limestone walls, are beautiful. I loved peering out at the immaculate, pastel-colored homes and the towering palmettos. At night, I could hear tree frogs whistle.

You will talk to locals.

To explore Bermuda's past, we started in St. George. The island's first permanent settlement, dating back to 1612, has a champion in Kristin White, a young entrepreneur who offers bike excursions and "haunted history" walking tours of the village. "I want other people to get excited about our stories," White said one morning at the Tucker House. She just turned the 1752 building's cellar into a concept store, Long Story Short, where customers can browse for gifts (jewelry, books, head scarves), rent bikes, and, of course, chat with her.

We walked the cobble-stoned lanes, stopping at the 1707 Bridge House, one of the oldest buildings in St. George. White told us that the house had once been owned by Bridger Goodrich, a white Bermudian. After his death, one of his female slaves, Philippa, won her freedom from his son, after arguing in court that Goodrich had promised it to her.

White's tours are bookable through Winnow, a new app that allows you to arrange guided snorkel trips, paddleboarding sessions through mangroves, even hands-on beekeeping. "It's a host in your pocket," said Alison Swan, who created the platform with her friend, William West. Winnow's most popular outing is a cocktail hour in a Bermudian home, something I was eager to test. "In the heyday of the 50s and 60s, people would open their houses all the time," she explained. "We're trying to bring that graciousness back." One night, Swan took us to Shelly Bay, where we met William's parents, Jenny and Blake West, in a house Blake had built himself. We talked politics, there and at home, and raising kids. The Wests didn't know us from Adam, yet they happily opened their doors (as they do for all Winnow guests), and somehow, we all managed to make conversation and learn from one another.

The seafood is superb.

When it comes to restaurants, Bermuda is not Copenhagen or Tokyo. Nor does it pretend to be. What it does well is seafood, simply cooked and plated. One of our best meals was at Wahoo's Bistro & Patio (entrées $14–$42), a casual restaurant in St. George that specializes in spiny, clawless Bermuda lobster — sweeter than Maine lobster, just as incredible with drawn butter and fries.

There is fierce debate over who serves the best fish sandwich. At Art Mels Spicy Dicy (9 St. Monica's Rd.; 441-295-3965; entrées $12–$23), a no-frills storefront outside Hamilton, locals start lining up at noon for sandwiches piled high with lightly battered grouper or wahoo. Woodys Sports Bar & Restaurant (1 Boaz Island; 441-234-6526; entrées $18–$30), on the way to the Dockyard, has more atmosphere (picnic tables, a Top 40 soundtrack) and superior sauce. There is no debate about the correct way to order a fish sandwich: always on raisin bread, never on a plain bun.

Related: Everything You Should Eat in Bermuda, According to Marcus Samuelsson

For a family night, Village Pantry (entrées $18–$38), in the seaside town of Flatts Village, is a winner. We ate fish tacos on the patio while Bobby flirted with two older girls in the yard next door. Ruby Murrys (entrées $15–$25), an Indian restaurant on a side street in Hamilton, serves a wicked Goan coconut fish curry. For a date night, visit Rosedon Hotel, set in an early-20th-century residence, and eat at one of the quiet patio tables at newcomer Huckleberry (entrées $25–$64). The chef, Lucy Collins, who was born in Charleston, South Carolina, serves divine Southern-style crab cakes and tender, pasture-raised rack of lamb.

Rainy days can be fun.

When it was sunny, we spent hours outside, watching from the infinity pool at the Princess as yachts cruised into Hamilton or looking for shells on the wide expanse of Elbow Beach.

But the weather can change on a dime. When it did, we headed for Hamilton, where the tidy streets are lined with one-of-a-kind shops, many in operation since the early 1900s. The Bermuda Bookstore, on the corner of Queen and Front, is crammed with best sellers and lesser-known historical books about the island. I grabbed (and devoured) Kiernan Doherty's Sea Venture, about Bermuda's first colonists. Just up Queen Street is Della Valle Sandals, a shoe shop named for its vivacious Italian proprietor. After he offered us espressos, I got fitted for custom sandals made of buttery soft leather in bright primary colors.

A more surprising find: the Masterworks Museum of Bermuda Art, a collection of more than 1,800 pieces inspired by the island. Set in the middle of Bermuda's 36-acre Botanical Gardens, it includes marquee examples by Georgia O'Keeffe and Winslow Homer. During our visit, the quiet gallery showcased 119 contemporary sculptures, paintings, and mixed-media compositions by aspiring artists competing for the biannual $10,000 Charman Prize. Not every example was polished, but that didn't matter. The exhibition looked forward, toward a new generation of creatives playing and testing and imagining their home, for all the world to see. 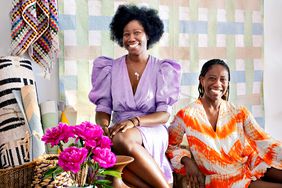 What to Do in Antigua, According to the Sisters Behind a Colorful, Caribbean-inspired Hamptons Boutique