Japan is revered for many things: Buddhist temples, stunning cherry blossoms, bustling metropolises, and the freshest, most far-out fish markets. But it also has thousands of spectacular islands, beyond the four main ones that make up a majority of the country's 142,000 square miles. In fact, thanks to the north-south extension of the country from 20 degrees to 45 degrees latitude, Japan's islands are among the most beautiful places on Earth, ranging from lush tropical paradises in the south to dramatic snow-capped volcano peaks in the north. With this diversity of climate and landscape, Japan's islands are home to stunning ecosystems that are little worlds unto themselves. Coral reefs, bottleneck dolphins, and loggerhead turtles? Head to the remote Ogasawara archipelago. Volcanic peaks surrounded alternately by plush powder snow and vibrant alpine flowers? The northern island of Rishiri is your spot. There are rock formations formed millions of years ago by contracting lava, primeval cedar forests that feel like a Tolkien fantasy, and sloping fields of technicolor flowers. It's practically an embarrassment of natural beauty, begging the question: Which island will you visit first?

Mount Rishiri, a dormant volcano and symbol of this remote northern island, is breathtaking when snow-capped in the winter, but most spectacular when covered in summer’s alpine flowers.

If you don’t make it to one of the thousands of lesser-known islands, Hokkaido, the northernmost of Japan’s main four islands, offers epic vistas and diverse landscapes in all seasons.

Hike up the mountainous Rebun Island for views of its 300 species of alpine flowers and neighboring Rishiri Island, but don’t miss the scenic drive along the steep southern coastline.

Even beyond its famous flower-filled Nokonoshima Island Park, this island is a one-of-a-kind technicolor spectacle with its bright yellow rape blossoms, purple cosmos, scarlet sage, and classic pink cherry blossoms.

The rocky coves and cliffs and emerald waters along Sado Island’s coast offer a stunning place to kayak or dive, and equally dramatic are the haunting cedar forests on the island’s interior.

While there are plenty of spectacular beaches on Iriomote, the largest of the subtropical Yaeyama Islands, the real draw is inland: wild jungles, mangrove forests, and picturesque waterfalls.

The turquoise-green waters, white sandy beaches, and coral reef surrounding petite Taketomi Island scream Fiji, but the utaki scattered around the island — sacred shrines for showing respect to the gods — are most definitely Japanese.

Though Ishigaki Island, within the Yaeyama archipelago, has a thriving urban center, its secluded coves, white-sand beaches, and pineapple plantations make it feel like a timeless tropical paradise.

Wild rock formations formed by contracting lava, craggy pools filled with tropical fish, and the 4.5-mile sandbar at Hatenohama Beach are just a few stunning signatures of Kume, a small and quiet island within the Okinawa island group.

With its clear turquoise waters, powdery beaches, coral reefs, and picture-perfect sunsets, a visit to Miyako, the largest of the Okinawa Islands, is about as dreamy as island time gets.

The rocky cliffs, white-sand beaches, and unspoiled nature that's a breeding ground for turtles and seabirds are a privileged sight for a mere 100 visitors a day to this small island.

With about 250 different coral species, Tokashiki Island, the largest of the Kerama Islands, is a snorkeler’s paradise — and the rugged hiking through its lush interior makes a compelling case for land lovers, too. 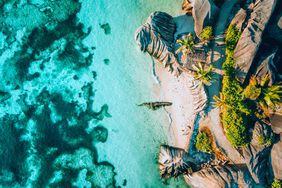 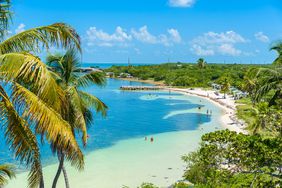 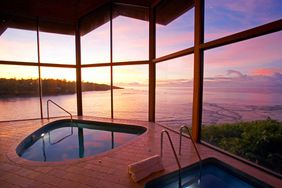