Fast, cheap, and (slightly) out of control: On a whirlwind trip to Iceland, three coffee-fueled travelers appreciate the benefits of a package deal

As a second-generation Scandinavian-American, I like to think I have an affinity with my Viking brethren in Iceland, though most Icelanders are a lot cooler than I am, and far more attractive. One look at them and you can imagine their ancestors marauding across the seas, fierce north winds whipping their golden locks. My ancestors were most likely stuck at home, gutting a stinking load of herring. Still, I feel a certain bond. And ever since my first and only visit to ReykjavIk years ago, I have unfortunately been obsessed with Iceland.

I say unfortunately because, though it's as close to me as California--only five hours from New York--Iceland can be absurdly expensive. Memories of $300 basic hotel rooms and $6 cups of coffee kept me from planning a return. That is, until I came upon an offer from Icelandair.

I normally shun package deals, but I can't pass up a great value, and Icelandair's Adventure Package seemed to fit the bill. For $650 per person, it included round-trip airfare, two nights at a Reykjavik hotel of my choice, and a rental car for exploring the countryside. I also added a day trip to the northern city of Akureyri for $174. Considering that the flight alone would have cost $610, it was quite a saving.

Emboldened, I called my friends Mark and Eric, who'd never quite believed my stories of stunning waterfalls, impossibly blue glaciers, and black-sand beaches, and offered them a chance to see for themselves. So in early September we packed heavy sweaters, hiking boots, and, between us, three copies of the latest Björk CD, and took off for a quick subarctic weekend.

Our plane touches down just as the sun is rising over the barren lava fields around Keflav’k Airport. We haven't slept at all, but the shock of daylight revives us. The concierge at the Radisson SAS Saga Hotel hands us three passes to the Vesturbaer public sauna, just blocks away, and soon we're indulging in the ultimate jet-lag remedy: a turn in the steam room and a soak in a 114-degree outdoor hot tub. The air is 48 degrees, and clouds of steam billow into a crystalline sky.

By 10 a.m., dizzy from the heat, we stagger back to the hotel for a Scandinavian breakfast (all the herring you can eat!), included in our package. After three trips to the buffet and four pots of coffee, Mark and I are humming; we've abandoned all thoughts of sleep. "This can't be good for us," Eric groans as his coffee cup rattles in his hands.

A short walk across the prim lawns and immaculate sidewalks of Reykjavik brings us to Hertz, where we're to pick up something called a Yaris. It turns out to be a puny Toyota hatchback. Still, it's peppy. Hertz even gives us a CD--a narrated guide to the Golden Circle, a 160-mile drive passing southwest Iceland's best-known natural landmarks. The narrator, Fridrik Brekkan, directs us out of town with uncanny precision. "Please watch your speed," he warns just as Mark shifts into high gear.

The low-lying, 1960's-era suburban apartment blocks quickly give way to a treeless desert of lichens and black rock. Then, just as suddenly, we descend into the Sudurland, Iceland's main farming area. We spot the hothouses at Hveragerdi, where much of Reykjavik's fresh produce is grown in geothermally heated greenhouses--"including bananas!" Fridrik tells us.

How can you not love a country where even the gas stations serve sandwiches of smoked salmon and free-range lamb?After a long nap beside a waterfall, on moss as green as a Pellegrino bottle, we lunch at a highway rest stop (meal for three: $15). The friendly busboy gives us a copy of his band's CD, which he accurately describes as "Tom Waits goes to Bollywood." Everyone in Iceland has a CD--only here, the CD's are invariably good.

As we continue across the moonlike plains, through a treeless landscape, we soon detect a whiff of sulfur. We're still miles away when the plumes of spouting hot springs come into view. The largest of these--Geysir--lent its name to the phenomenon. Although it was dormant for several decades, an earthquake in June 2000 caused Geysir to reawaken, and it now erupts several times a year. We're lucky enough to catch the 90-foot gush of the nearby Strokkur geyser as we enter the parking lot. At the Hotel Geysir restaurant, we snack on rye bread that's been baked for 12 hours using vapor from a hot spring. Our mistake: it tastes like the inside of a sauna.

By five o'clock, we're anxious to return to ReykjavIk before nightfall, so we pick up speed. Eric cues up Led Zeppelin III for driving inspiration: "We come from the land of the ice and snow / From the midnight sun where the hot springs blow. . . ."

Having revived ourselves with more sandwiches--and three triple espressos--from the stylish Kaffibrennslan brasserie, we set out on the requisite club crawl. Reykjavik is legendary for its nightlife, and I'd been hyping it since we left New York. Yet at 11 p.m. on a Saturday, it's strangely quiet at Prikid, one of the newer alleged hot spots. By midnight even I have to wonder: Where is everyone?Mark is visibly flagging, and Eric is facedown on our table.

Suddenly, as if on cue, the doors burst open and a crowd of revelers spills in, dressed in everything from Gaultier minidresses to Day-Glo orange jumpsuits. Within minutes, the bar is packed, the music is throbbing, and Eric is bouncing across the dance floor. Three hours later, we have to drag him back to the hotel.

A few hours of sleep and we're awake again, fumbling to the airport for our 7:30 a.m. flight to Akureyri. The 40-minute hop affords a glimpse of Iceland's barren interior--only 21 percent of the island is habitable, mostly along the coast. Descending through the clouds above Akureyri, we encounter a wholly different landscape from that in the south: here, towering green mountains, their peaks fringed with snow, flank a sparkling blue fjord. We're only 60 miles below the Arctic Circle, yet verdant meadows and farmland thrive in the mild summer climate.

With 15,000 residents, Akureyri is Iceland's second-largest city, though on this Sunday morning 14,998 of them seem to be asleep. In our second rented Yaris, we head east, with the road to ourselves, and in two hours arrive on the shores of Lake Myvatn.

From a name like "Midge Lake," you wouldn't expect much, but Myvatn is a beauty: five miles across, with tiny green islets and countless waterfowl. Fortunately the lake's namesake gnats aren't in evidence today. The road around the lake takes us over bubbling rivers jammed with trout, past twisted sculptures of petrified lava, and under the shadow of an imposing black volcano that recalls an image of Mordor in The Lord of the Rings.

Myvatn's northern shore is a neon-green field that we soon realize is spongy moss—what amounts to an acre-sized, five-inch-thick mattress. "Well, it's obvious what must be done," says Mark, and off we run, three grown men, leaping and somersaulting in the air, bouncing on a squishy cushion of green. Blame it on sleep deprivation.

After a cheap lunch—dense black bread, pan-fried arctic char, and trout smoked over sheep dung (much better than it sounds, really)—in Reykjahl’d, a lakeside village, we drive north to the thermal fields of Hverarond. Forget Mordor: this is the spitting image of hell itself. Sinister mud pools gurgle and belch, and rank vapor screams out of fissures just steps from the path. Under our delicate footsteps, the ground sounds suspiciously hollow.

Suitably awed, and more than a little spooked, we race to Akureyri for our flight back to Reykjavik. After our day up north, the diminutive capital seems like a sprawling metropolis--downtown buildings shoot up four whole stories!—and the city lights give us a much-needed second wind. At Kaffi ReykjavIk, a wood-beamed, candlelit dining room near the harbor, we have some fantastic grilled haddock, then catch a set by a scorching bebop combo at the adjoining bar. It's well past two when the last note is played.

I deliberately haven't told Mark and Eric about the Blue Lagoon, so they're curious when I pull into a parking lot 40 minutes outside ReykjavIk on our way to the airport. They glance nervously at the geothermal power plant nearby. But their jaws drop as we approach the lagoon itself, glowing sky-blue even on this overcast day.

The Blue Lagoon is Iceland's most famous geothermal spa, a vast man-made oasis of 100-degree water supplied by the thermal power station next door. Today, shrouded in mist that obscures the edges of the 465-square-foot pool, it's especially surreal. We float on our backs in the milky blue water, feeling as if we're suspended in the clouds.

Our skin is still tingling as we board our flight to New York. The final tally?Just $2,369, 31 rolls of film, 47 cups of coffee, nine hours of sleep.

How do you say "cheap" in Icelandic?

Of the numerous packages offered by Icelandair Holidays (800/779-2899; www.icelandair.com) to Iceland, the Adventure Package is the standard, with rates starting at $599 per person, double, depending on the hotel. The price includes round-trip airfare from New York, Boston, Baltimore, Orlando, or Minneapolis; airport transfers; and two nights in Reykjavik, with breakfast. The best choices are the Hotel Borg, ReykjavIk's grandest, or the Radisson SAS Saga Hotel.

With daylight lasting long into the night, June to August is the best time to go, but also the most expensive. To cut costs, consider May and September, when it's still pleasantly mild. Unless you're seriously sensitive to sunlight, there's little reason to visit in winter--you'd mostly be sightseeing in the dark. On top of the standard package, we added a rental car (from $50 per day), as well as a day trip to Akureyri (from $174 per person, including the flight from Reykjavik and rental car). 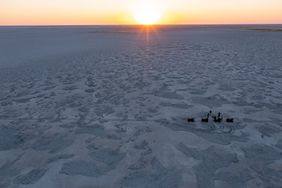 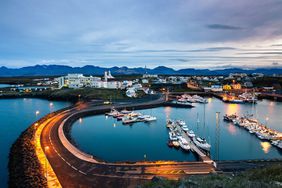 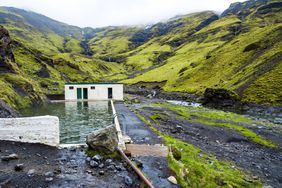 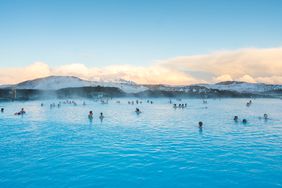 Blue Lagoon or Sky Lagoon? What to Know About Iceland's Famous Pools