It’s been 100 years since the United States government passed the 19th Amendment granting women the right to vote. Though there are many people to remember for this monumental amendment and movement, there’s one destination people should remember, too. And that destination is the Finger Lakes region in the state of New York.

This year, the Finger Lakes region will celebrate and honor its important role as the birthplace of women’s rights with the “100 Ways to Celebrate Women’s Empowerment” list, which is meant to educate visitors on “the past while providing the tools and skills for female empowerment in the future.”

Not only does the list identify some of the area's notable women, but it also acts as a map for visitors to use so they can design their own female-focused vacation in the area.

The guide suggests visitors start where the women’s movement began, in Seneca Falls, which was the location of the first Women’s Rights Convention held in 1848. Next, guests are encouraged to stop by the National Women’s Hall of Fame, the homes of trailblazers like Susan B. Anthony and Harriet Tubman, and the courthouse where Anthony was tried for the “crime” of voting.

The map also includes suggested stops at Café XIX, the Corning Museum of Glass (where visitors can watch demonstrations by female glassblowers), and the Hammerstone School to see an all-female carpentry class in action. Opt to stay at the lakeside Inns of Aurora, which was founded by American Girl creator, Pleasant Rowland. The guide also includes a stop at the Belva Lockwood Inn, former home of Belva Lockwood, the first woman to run for president.

Those interested in visiting the Finger Lakes to celebrate women’s history may also want to time their tour around one of the events happening in the region.

Throughout the year, the Finger Lakes is hosting Votercade 2020, which it calls a “think tank” for artists, musicians, and philosophers at locations around the area.

For more details about the destination and information about these events, check out the Finger Lakes website and start plotting your female-focused tour right now. 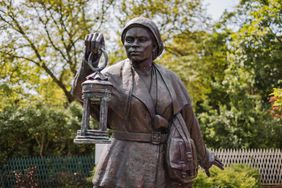