Jacqui Gifford
As the editor-in-chief of Travel + Leisure, Jacqui Gifford is always on the next plane. She constantly scouts for new hotels, shops, and restaurants to give readers the latest news and trends, and frequently appears as an expert guest on television networks, including NBC, CBS, ABC, CNBC, and MSNBC.
Travel + Leisure Editorial Guidelines
Fact checked by
Jillian Dara

As someone who's on the road at least once a month, has TSA Precheck, and has perfected the art of packing a carry-on suitcase, I thought I had flying down to a science. But then I had a kid, and somehow flying became daunting.

Now, having survived my first domestic flight with my son, Bobby, I can vouch for the fact that many of my travel rules and organizational tactics remained the same, kid or no kid. Pack light. Get to the airport on time (but not too early). Upgrade to economy plus, if it's in your budget.

All that said flying with a baby is an entirely different animal. And if you're doing it solo, like I did, you need to be extra prepared. I would never call the experience fun, like, lying on a beach in St. Barts with a glass of rosé in my hand fun. No, it's definitely not that. But surprisingly, it wasn't a root canal, either. Getting to and navigating the airport was routine — in some ways. Here, for first time parents and parents-to-be, are tips and tricks based on my experience. For more on my actual flights to and from Charleston, which had some real high moments, and some really low moments, stay tuned for my next column.

No one needs to be a hero here. If the prospect of flying with a baby freaks you out, pick a destination that's easy to get to — under two hours. I went with Charleston since it's a manageable hour and 45-minute flight from New York City. The rationale: no matter how bad things got up in the air, sweet, glorious land wasn't too far away. Why domestic? Well, if you're traveling with a baby under two (an infant-in-arms) they get to fly for free if they sit in your lap. All you have to do is note when booking your ticket online or over the phone that you are traveling with an infant in arms, and give their name and date of birth. Ask any parent who has kids over two and they will confess that making the switch from flying with a kid for free to paying full fare for their tickets is a major kick in the gut.

2. Your baby may need ID, and you may need a paper boarding pass

I read on several websites that I would possibly need to present Bobby's birth certificate as proof of age at the airport to an airline agent. Rob and I had gotten Bobby's passport a few months back, so I came prepared and brought it with me as his form of ID. Surprisingly, no one asked to see it or a birth certificate. What did happen: I made my way through a relatively short security line to the TSA agent, only to have him (politely) say that my mobile boarding pass wouldn't suffice — it did not show that I was carrying an infant in arms. He advised me that I would need a paper one. So, I had to turn around with the stroller, go back to a Delta agent, and get a paper boarding pass. The Delta agents were also surprised that I had to do this (and a Delta rep has since confirmed that sometimes they've seen the infant in arms designation drop off when using the wallet app). But once I had my paper boarding pass we were in business.

I did some digging on the ID issue, and here's what I came up with: the rules aren't hard and fast, and may differ from airline to airline. As far as the TSA is concerned, a baby does not need an ID to fly, and they will likely not ask you for an ID on a domestic flight. (I say likely, because, having talked to different co-workers, some have said the TSA has asked to see ID at times.) When it comes to the airlines, things get a little hazy. On their sites, the policies can be couched with language like you "may" be required to present proof of age (as it appears on American Airlines). Or, the language can be more definitive, as it is on Southwest Airlines, which states you need a boarding verification document, i.e. a birth certificate. I reached out to Delta, and a representative confirmed to me that they do not require an ID for minors under 18 traveling domestically. But for a child 12 months or older, they recommend bringing a birth certificate to help clarify the child's age for ticketing eligibility purposes.

Bottom line: bring a copy of your baby's birth certificate since it's better to be safe than sorry. What they're checking for here is to see if you may or may not be trying to take advantage of the kids under two fly-free policy, after your child is older than two.

3. Give yourself an extra fifteen minutes to get to the airport.

Our flight to Charleston was at 8:05 a.m. If I was flying without a kid, I would have set a 6:00 am car pick up and whizzed through security with TSA Pre. This trip, not so much. I had a stroller, car seat, and diaper bag to contend with, but I also didn't want to get to the airport super early — every little minute of extra sleep counted for me, and frankly, Bobby.

So I budgeted myself 15 extra minutes, figuring that's about what it would take to get in and out of the car and go through security with all this extra stuff. I made sure my clothes were laid out the night before, my bags were all packed, and I had slip-on flats ready to go. (Because when you're carrying a baby, nothing says nightmare like taking off and then retying your shoes in the security line). Truly, fifteen extra minutes was all I needed. And as I get used to flying with a baby, I may not need it at all.

I was lucky in that I was meeting my husband in Charleston. I made him carry pajamas and shirts for me, along with diapers, bibs, and outfits for Bobby. All I had to carry was a diaper bag, which I stocked with 10 diapers, wipes, my Skip Hop pronto changing station, bibs, two spare outfits, and plenty of formula, along with my wallet, ID, and toiletries. Here's what I would have done, had I had a suitcase: CURBSIDE CHECK-IN. I repeat, CURBSIDE CHECK-IN. When you're juggling a kid and luggage solo, it just makes sense to ditch those bags as soon as you can and skip waiting in line inside. And that's what curbside is there for.

When I first started shopping around for strollers, I was shocked by the prices and the sheer choice. It was like shopping for a car. We bought the Britax B-Agile 3/B-Safe 35 Travel System, both for the moderate price and the fact that it is lightweight and specifically designed for travel. It comes with a B Safe infant car seat that easily snaps in and out. As your kid grows out of the car seat and can sit up, you remove it, and use the regular stroller.

The big debate with a stroller is if you should check it like a regular piece of luggage and carry your baby through the airport in a Baby Bjorn or similar carrier. Or, do you deal with the hassle of taking the whole gizmo through security and gate check it instead? With the latter, you clearly have the benefit of not wearing your baby at all times. (I should note that with both methods, the stroller and car seat may be checked for free.)

I went with the latter, and it was 100 percent the right choice. Here was the surprise of my life: security was not so bad. In fact, it restored my faith in humanity, because fellow fliers and the TSA were eager, willing, and able to help me. I put Bobby in the Bjorn — you must wear or hold your baby through security — decided to not stress, because kids feed on stress, and totally did not care what anyone else around me thought.

The funny thing is other passengers and security guards were so helpful I was through in no time, and I don't really remember how it all went down, step by step. I know my diaper bag went on the conveyor belt, as did the car seat, courtesy of a TSA agent. For some reason, my shoes set off the alarm, but a random stranger actually picked up my flats and put them on the belt. The TSA agent, I think (and I say think because I was so focused on Bobby, I didn't see everything) wheeled the stroller through the metal detector. Another agent scanned the formula that I had. And then I was done, and able to wheel him around the airport with ease and yes, even grab myself a cup of coffee.

My main takeaway for you is that no one is reinventing the wheel, here, and just because you're flying with a kid doesn't mean that the experience has to be a nightmare. People, especially other parents, are willing to help you out. And even if your kid has a meltdown, just remember — you'll never see these people again. 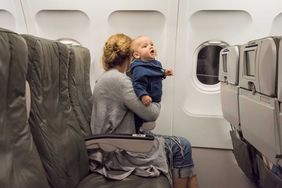 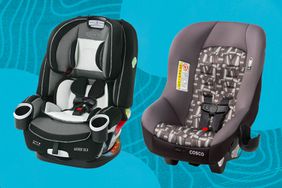 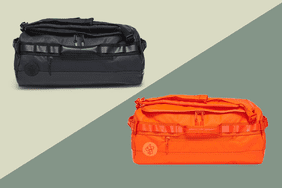 I'm an Outdoor Gear Expert, and This Is the Best Adventure and Travel Bag I’ve Ever Used 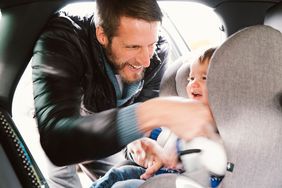 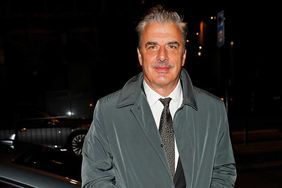 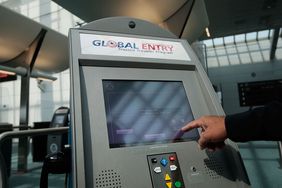 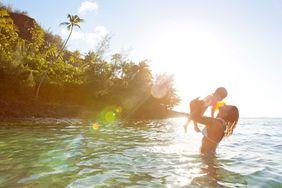 How to Survive a Beach Vacation With a Baby 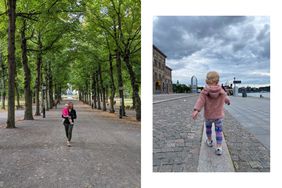 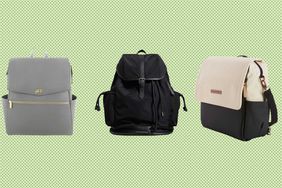