My tween daughter could spend hours on end playing on the game building online platform Roblox, so it wasn't a huge shock to learn that 76 percent of American kids are gamers, according to a recent report from the Entertainment Software Association. More surprising? Sixty-seven percent of adults are enthusiasts, too. In fact, the hobby is so widespread that it has begun to shape travel for families in myriad ways, from tricked-out suites and specialty cruises to high-octane adventure tours.

Atari, which first popularized home consoles in the 1970s, is rolling out eight Gensler-designed Atari Hotels in the U.S. The first will open in 2025 in Las Vegas, with properties to follow in cities such as Denver, Austin, and Seattle. Plans include retro-style arcades in each, along with innovative immersive entertainment. Penta Hotels (doubles from $100), with properties in Europe and Asia, already offers Penta PlayerPad rooms and suites in 20 locales, including Paris and Vienna. Setups in the suites include a spacious, loungy gaming area equipped with PlayStation 5 consoles and fresh-made pizzas available from room service around the clock.

For next-level immersive experiences, Universal Studios Japan opened Super Nintendo World in Osaka in spring 2021. It is like living inside a gleefully surreal video game. Now the concept is coming to the States, with a Hollywood location opening next year and another in Orlando after that. Albuquerque's Electric Playhouse, a sprawling digital-entertainment facility with 16 high-tech interactive spaces, has an array of innovative games, including Full-Body Air Hockey and Space Runner. But the most impressive is King of the Worms, where the floors react to your body, so your movements lead the game play.

In Orlando, Star Wars: Galactic Starcruiser (from $4,809 for two people), a two-night experience aboard Disney's Halcyon spaceship hotel, is the ultimate choose-your-own adventure, bolstered by an eclectic cast of real-life characters. Join a smuggling ring, wield a light saber, or stop by the remote planet of Batuu before spending the night in a themed cabin or suite.

Escape rooms are like video games brought thrillingly to life, and PanIQ Escape Room, a worldwide operator, has some of the most inventive. At the New York City location, there's Pyramid Heist, where players must crack codes to find the Golden Ankh of Rah or be forever cursed by Anubis, an Egyptian god of the dead. Across the Hudson River, Liberty Science Center, an interactive science museum in Jersey City, New Jersey, is hosting "Minecraft: The Exhibition" through September 5. The 6,000-square-foot multimedia extravaganza has 15 life-size characters, Minecraft biome dioramas, and time lapse world-building tutorials.

Recently introduced tours pair gaming with opportunities for cultural immersion. GACUCON (six-day trips from $2,330 for two people) offers a sailing from Miami on which families can take advantage of a 24-hour onboard gaming hall, manga library, and live-action role-playing combat training. Stops in Jamaica, the Bahamas, and Haiti may include tubing, ziplining, swimming with dolphins, and trips to architectural sites to inspire future world-builders.

Travel company Tailor Made launched its free Lost Tribe Esports Birthright Israel trip to connect Jewish young adults with the cutting-edge tech scene of Tel Aviv. The itinerary provides opportunities to compete against pro esports players in games like Fortnite and FIFA. Participants can also meet with developers of the 2021 game Grime. Outdoor excursions include floating in the Dead Sea, rafting the Jordan River, and sleeping in a Bedouin tent.

Bespoke itineraries are also an option. Keith Waldon, founder of the Texas-based Departure Lounge and a member of T+L's Travel Advisory Board, can design a trip based on a family's video game of choice. Fans of Grand Theft Auto V, which is set in Los Santos, a fictional southern California city, might embark on a tour of Los Angeles to see landmarks shown in the game, then participate in a stunt-driving lesson, a studio tour, and a bank robbery escape room.

London-based bespoke travel company Brown & Hudson offers a groundbreaking new vacation scrapbook in which a videographer with a 360-degree camera discreetly joins a family to capture their journey. Upon return, the entire trip is turned into an epic VR experience they can revisit together, with new surprises woven throughout.

A version of this story originally appeared in the June 2022 issue of Travel + Leisure under the headline Beyond Bananagrams. 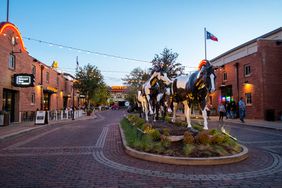