Whether it's an abandoned, 20th-century hotel balancing precariously on the edge of a cliff in Colombia, or a boutique property in Los Angeles with all kinds of bustling nightlife, these accommodations all share one thing in common: they're occupied by a spirit or two, making them the most haunted hotels in the world.

Take the Langham Hotel in London, for example. Since it first opened in 1865, the grand dame has acquired an impressive collection of spirits, including butlers and footmen who just can't stop serving, Napoleon III (who stayed here during his exile), and an unfortunate chap with a grotesque wound on his face.

Related: 13 Real Haunted Houses From All Over The United States

Meanwhile, in Los Angeles, a clutch of celebrities refuses to leave the Hollywood Roosevelt Hotel, which was built to impress the jet set. Since a 1984 renovation, the otherworldly inhabitants have become rather protective of their favorite hot spot, making their presence known by taking phones off the hook and typing on typewriters. Actor Montgomery Clift, specifically, is known for rehearsing his lines and practicing his trumpet in his old room, No. 928.

Related: The Top 15 City Hotels in the Continental U.S.

While most of these hotel ghosts are the friendly, Casper type, a few seem to get their eternal kicks from scaring the life out of the living guests. Others, like the founders of The Stanley Hotel, Freelan Oscar Stanley and his wife, Flora, simply want to make sure their beloved properties are well-maintained. Their chambermaid stayed behind, too, to help guests unpack their belongings.

If you're looking for a good spook or scare, consider bedding down at one of these 10 most haunted hotels in the world.

Under the shadows cast by the Rocky Mountains is this famous 20th-century hotel, best known for inspiring Stephen King's novel, "The Shining." When a 1911 explosion in Room 217 injured the hotel's chief maid, a paranormal mark was made. Although she recovered, it's believed that her soul returned to live at the place she once tended for, along with the spirits of the hotel's owners, Flora and F.O. Stanley. You may hear Flora playing the antique Steinway, snap a photo of F.O. overseeing a game of billiards, or find your belongings mysteriously unpacked.

The historic Hotel Chelsea has long attracted the spirits of famous musicians and artists, in both life as well as death. Poet Dylan Thomas passed away while living at the hotel, and decades later, Nancy Spungen (girlfriend of the Sex Pistols' Sid Vicious), was stabbed to death in Room 100 — possibly by Vicious himself. Although new guests can't check in (the hotel is undergoing renovations), it's been said that all of those tortured ghosts remain.

Many consider the Langham, built in 1865, to be the most haunted hotel in London, and most of the paranormal buzz comes from Room 333. Only the most brave (living) souls check in here, and they have seen everything from the Victorian-era doctor (who killed his wife and himself on their honeymoon) to the German prince who jumped from fourth floor and still dons his military-style jacket. Emperor Napoleon III, a shoeless butler, and a footman in a powdered wig have also made ghostly appearances.

Sydney's Russell Hotel sits in a once-seedy part of town known simply as The Rocks. Today, things have turned around, but the past's darker days still linger at the hotel. Of particular note is the colonial-era sailor who never made it back out to sea. Today, he lurks in the entrance hall and in guests rooms — he's particularly fond of Room 8 — paying special attention to women who spend the night.

When James Hepburn, the Earl of Bothwell, was captured by the Norwegians (who ruled what was then Denmark-Norway) in the mid 1500s, he was imprisoned at Dragsholm Castle. Seclusion drove him mad, and he was ultimately tied to a pillar and left to die. To this day, he's still unable to leave the Danish estate. Guests sometimes see him on horseback, riding through the grounds at night. He is kept company by the White Lady, who is said to roam the corridors at night — in the 1930s, a skeleton in a white dress was found inside the castle's walls.

Rumor has it that Charlotte, a beautiful sex worker who frequented Nottingham Road Hotel at the turn of the century, fell deeply for a soldier passing through town. When she learned that her love was gone — either unrequited or killed in battle — she threw herself from Room 10's balcony. Now, she passes her afterlife rearranging flowers, moving mirrors to catch her best angle, and folding guests' clothes.

This modest inn, which sits on the main square of a small village, is anything but sleepy. It's not uncommon to catch a glimpse of a hooded monk or Betty Radcliffe, a former landlady. After more than six centuries in business, it's no wonder that the tavern has a mysterious energy.

Marilyn Monroe was a frequent guest at the Hollywood Roosevelt Hotel, and she was especially fond of the poolside Suite 1200 and its full-length mirror. Now, guests gaze deep for a glimpse of the superstar, whose reflection has been known to appear time and again. Like Monroe, a number of actors and performers who frequented the hotel in life have chosen to make it their residence during the eternal holiday that is death. Carole Lombard, Errol Flynn, and Montgomery Clift are among those spectral stars.

Hotel del Salto, now a museum of biodiversity and culture, is still best known for its role as a luxury destination for Colombia's elite. From its perch on the edge of a cliff, guests had an unimpeded view of the 515-feet high Tequendama Falls. When the hotel was abandoned in the 1990s, it acquired a haunted reputation, due in part to the noxious aroma from the Bogota River surging through the gorge below, the treacherous, winding roads leading to the property, and the property's history of suicides — countless individuals have thrown themselves into the ravine.

W.A. Chambers was one of the masterminds behind the design of India's opulent Taj Mahal Palace Hotel. He drafted up intricate blueprints, left for a trip to England, and returned to find that ideas hadn't been carried out as planned. Legend goes that Chambers — perhaps enraged over the changes — flung himself from the fifth floor to his death. He can be seen, to this day, wandering about the hotel, making certain things are as much to his liking as possible. 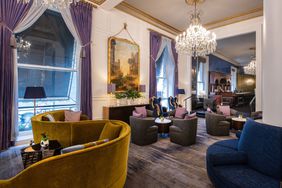